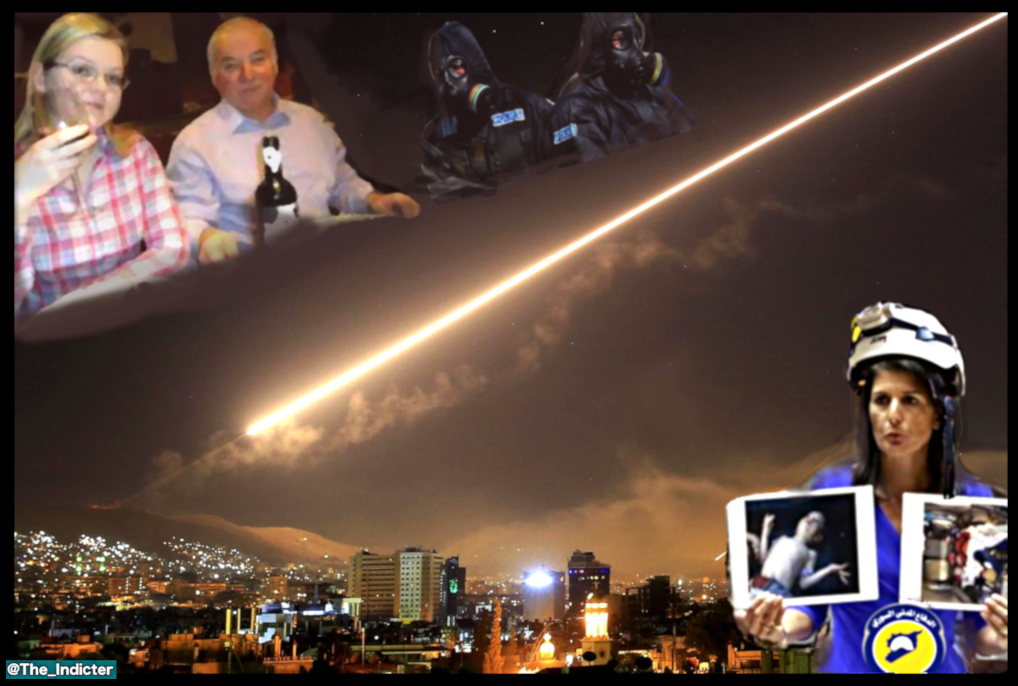 Skripal-case allegations aimed to legitimate bombing of Syrian forces By Prof. Marcello Ferrada de Noli, Chief-editor, The Indicter Magazine.   U.K., the U.S. and France are now, again, using the Skripal case in the context of their illegal intervention in the Syria conflict I wish to recall that the bombing of (Russia-backed) Syria perpetrated […]

U.K., the U.S. and France are now, again, using the Skripal case in the context of their illegal intervention in the Syria conflict

I wish to recall that the bombing of (Russia-backed) Syria perpetrated by UK, US and France on April 14, 2018, followed a  series of claims done in the weeks before by the UK government about an alleged Russian-State responsibility in the poisoning of the agent Sergei Skripal and his daughter in Salisbury –a case presented amidst highly contradicting forensic and political reports. The poison itself was claimed being “Novichock”, then described  as the most lethal nerve agent ever made –and “made in Russia”.

In these days, the UK and its two allies in the above mentioned missile attack on Syria, are anew publicizing spectacular “revelations” around the Skripal case. The UK authorities now claim they have identified “two agents” from the Russian Military Intelligence as the perpetrators of the Salisbury incidents.

But also again, these new remarkably allegations against Russia – in concrete against the Russian government- follow a) recent reports exposing White Helmets’ plans to (anew) stage chemical attacks in the Syrian province of Idlib, and b) the issuing by UK, US and France of a statement in which the named governments “vowed to respond to the use of chemical weapons by Syrian President Bashar al-Assad amid anticipation the regime is preparing a major offensive to retake Idlib province.“  [See DW dispatch here].

The UK presentation at the Security Council on the Skripal case

Analyzing the presentations that U.K. is now doing in international forums (e.g. United Nations Security Council 6 September 2018), I found that the presentations’ core is mainly focused around the “chemical-weapons” issue in general, rather than in the alleged “poison Novichok” of the Salisbury incidents. In addition, UK envoy Karen Pierce clearly used the Skripal case to specifically mentioned the need of supporting enhanced OPCW operations, which, as we know, have aimed to cast “culpability’ on the Syrian government ad its allies, Russia and Iran, all based on spurious reports never verified according to scientific forensic procedures.

Confirming this strategy, the intervention of the French envoy at that session of the UN Sec Council was even more specific:

“the use of chemical weapons cannot in any way considered as an option, and the remerging of these weapons is a challenge to our system of collective security…for this we need to strength the role of the OPCW”

France’s representative concluded, after explicitly linking the Douma incident (the alleged chemical attack in Syria) with that of Salisbury: “In this context it is essential to ensure that the international community has a mechanism of including attribution for all cases of use of chemical weapons in Syria.”

(It is worth to note that after the White Helmets’ fabrications of the Duma ‘chemical incident’, France, together with UK and the U.S., mounted a missile attack on Syria, in April 2018).

For its part, the U.S. representative in the Security Council meeting of 6 September,  Ms Nicky Haley, opened her intervention by immediately inking the claims on Syria and the Salisbury incident: “We address the issue of the use of chemical weapons for the first of two times today “, alluding to the upcoming session that day –on the Syria situation.

‘Separate’ statements on Salisbury and Syria by UK, US and France, overlap

The very same day (6 of September), same countries that lead the Western-countries financial support to the White Helmets and the terrorist forces combating the government of Syria, produced a “Joint Statement by the Leaders of France, Germany, the United States, Canada and the United Kingdom on the Salisbury Attack.” Here the OPCW is again prominently mentioned. After to carefully examined the text of the IK envoy to the Un Security Council and the text pf this ‘joint statement’, in my opinion this one was also drafted by the UK officials. The statement was first mentioned in the BBC under the heading, “UK Novichok allegations backed by world leaders”.

As I am doing this text, the Wall Street Journal reports (11 September 2018) that “The U.S. is working with France and the U.K. on plans for a coordinated military strike in Syria if the regime uses chemical weapons in an expected offensive against the country’s last major rebel haven”. A declaration the Post attributes to President Trump’s national security adviser Bolton.

The Western powers have incessantly accused Russia of collusion with the Syrian government on the issue of “use of chemical weapons”. And nowadays even asserting that they possess “lots of evidence” on that…

And what those “evidence” would be?

However, top Pentagon General Joseph Dunford declined to confirm that claim of “lots of evidence” uttered by Jim Jeffrey. Previously, in February 6, 2018, Defense Sec Jim Mattis declared that they did not have evidence of a sarin attack by the Syrian government. In those same days the French Defense Minister had declared not having conclusive evidence about chlorine gas attacks…

The above hardly mattered for the consummation of NATO operations against Syria, as ‘retaliation’ for some that never gas been verified whether it actually occurred. As known, in April 2017, on the base of info primarily rooted in the White Helmets’ reports that a ‘sarin attack’ would have been perpetrated by the Syrian government, President Donal Trump ordered a missile attack on Syria.

Within the same narrative, these powers have sought to endow the OPCW with further authorities, all converging to obtain a fraudulent condemnation of Syria and its allies on the base of false accusations regarding the use of chemical weapons.

The OCWP in its turn has heavily based its reports about those complains on Syria, on the base of ‘testimonies’ delivered by the White Helmets.

This propaganda organization, founded by the U.K. and whose activists receive a monthly salary (stipend) paid by Western powers, has been a constant, I would say, the standard main source used by the OPCW in the construction of its biased reports on “chemical attacks in Syria”. Now will the UK. and its NATO associates France, U.S., Canada and Germany, further increase the attributions of OPCW.

In my report UN ‘Joint Investigative Mechanism’ report on Khan Shaykhun proven inaccurate, politically biased”, I concluded that the OPCW reports on the alleged ‘sarin attacks’ in Khan Shaykun of 2017 contained serious flaws on both the sourcing and lack of    “verification” procedures regarding the White Helmets claims. Other reports published in The Indicter cast doubt on similar claims regarding, for instance, Douma, or previous White Helmets allegations of gas attacks like in the Sarmin episode of 2015. All this produce an unquestionable pattern of deception, aimed to serve as false-flags for ‘retaliatory’ military operations against the forces combating the jihadist terrorism in Syria.