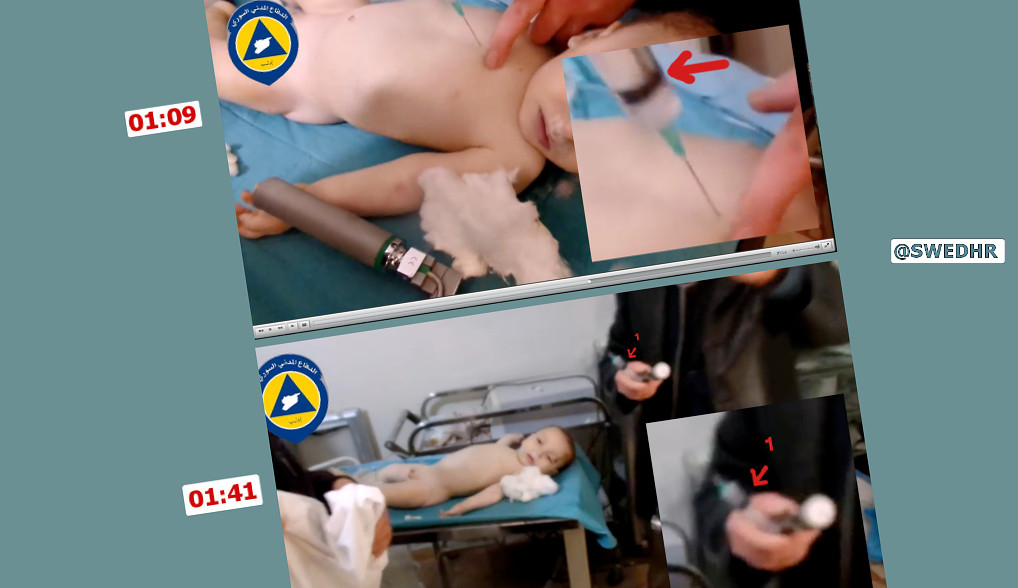 By Prof Marcello Ferrada de Noli, Chairman, Swedish Doctors for Human Rights – SWEDHR . I Summary. This article reports updated findings I obtained in a further examination of videos published by the White Helmets, and which aimed to represent consequences of an alleged gas attack in Sarmine in March 2015 [See my first […]

Summary. This article reports updated findings I obtained in a further examination of videos published by the White Helmets, and which aimed to represent consequences of an alleged gas attack in Sarmine in March 2015 [See my first report of March 6, 2017 White Helmets Video: Swedish Doctors for Human Rights Denounce Medical Malpractice and Macabre ‘Misuse’ of Children for Propaganda Aims.

]. [1] The videos depict a medical rescuing scenario focused on ‘lifesaving’ procedures on children.

The new findings, which have also been confirmed in second-opinions issued by MD specialists and members of Swedish Doctors for Human Rights (SWEDHR) on March 12, 2017, a) demonstrate that the main highlighted ‘life-saving‘ procedure on the infant shown in the second video of the sequence was faked. Namely, no substance (e.g. adrenaline) was injected into the child while the ‘medic’ or doctor introduced the syringe-needle in a simulated intracardiac-injection manoeuvre [See video below with the findings’ synopsis]; b) may bring support to the hypothesis mentioned by doctors in the previous report, referring that the child in question, “if not already dead, might have died because the injection procedure”.

The three children subjected to ‘life-saving’ procedures in the second video were eventually dead, and the cause of death –that according to the White helmets video would be attributed to chlorine gas– has been disputed by other medical opinions independently of the assessments by the Swedish doctors mentioned in the SWEDHR reports. For instance, in the opinion of a UK doctor, the health-status in reference to the above mentioned child could be instead attributed to drug overdose, likely opiates.

The findings in these reports raise serious questions about the ethical integrity of the organization White Helmets, on the anti-medical procedures they advertise in its videos, and the war-criminal behaviour represented by the misuse of dead children with propaganda aims.

Synopsis of the findings, in video upload in You Tube by The Indicter Channel, March 12. The video includes a clip from the CNN video of March 20, 2015, reproducing the same scenes form the White Helmets video, and interviewing a doctor that presented the video materials at the United Nations Security Council, on his advocacy for  No-Fly Zone in Syria.

The White Helmets videos analysed here are two consecutive uploadings done on March 16, 2017 by the “Syrian Civil Defense in Idlib Province” (a description given by White Helmets to themselves) [2] which will be here referred to as respectively “WH Vid-1″, and “WH Vid-2”. [3] [4] The production of the videos served the immediate purpose by White Helmets and the “moderate rebels” of promoting “their” campaign for a No-Fly Zone in Syria. In fact, the campaign has its origins in Hillary Clinton’s doctrine, as showed in a video upload by The Indicter Channel’ here. [5]

At the time, Senator McCain, the White Helmets, al-Nusra Front and other CIA-backed jihadist organizations were intensively campaigning for a No-Fly Zone in Syria. The videos aimed to represent the effects of an alleged gas attack in Sarmin, and imputed to the Syrian government. No evidence was ever produced regarding the attacks, beside two “anonymous” witnesses that claimed they had heard a helicopter (“heard”; not “seen” the helicopter). One of the anonymous sources turned out to be a White Helmets personnel [1].

The ‘save-rescuing’ videos, whose content was never analyzed or verified, were thereafter shown at the UN Security Council April 16, 2015. After that meeting, US Ambassador Samantha Powers declared, “I saw no one in the room without tears. If there was a dry eye in the room, I didn’t see it”. [6] Reuters reported the event [Box embedded in image below].

Ensuing, just four days after, on April 20, 2015, CNN broadcasted a news-program reproducing segments taken from exactly the same videos and propagated for the No-Fly Zone on behalf of “the Syrian doctors” campaigning. The newscast was published by CNN in YouTube on April 20, 2015. [7] The CNN anchor presented the ‘Syrian doctor’ “who has campaigned around the world for a no-fly zone” [Hear it in the MP3 audio here below]:

A striking, as well as politically relevant fact relating to these videos that were showed at the UN Security Council –and thereafter reproduced by CNN– is that such videos had been simultaneously published in YouTube, on the same day 16 of March 2015, by an organization showing a logo with the jihadist Shahada flag used by Al-Qaeda. According to communications I have received from European journalists with contacts inside Syria – the origins of “Coordinating Sarmin” (تنسيقية سرمين) –organization behind the propaganda videos posted by, and in apparent coordination, them and the White Helmets– is to be found in earlier al-Qaeda formations. The flags and symbols showed in the image sequence below may offer proof to such communications.

‘From al-Qaeda, to al-Nusra, to White Helmets…and to CNN’

Observe the black flag in the logo of “Coordinating Sarmine”, which together with White Helmets uplodaded the same video on March 16, 2015. [11]

Do observe that the upload date of the video above is exact the same than the White Helmets’. Same video, same publisher, same organization?

The reproduction of those al-Qaeda / White Helmets footage by CNN, camouflaged as “normal news”, is a fact that should be investigated together with the deceiving content in such footage. A clearer illustration of ‘fake news’ around the disinformation on the Syrian conflict is hard to find.

It is remarkable that no UN official, no CNN journalist, etc., ever reflected on the veracity or authenticity of the enacted ‘saving-lives’ scenes in the video. For instance, and to the best of my knowledge, this is the first time that an analysis of the syringe episode is conducted in the terms I describe here below.

The result of this observation, later supported by two Swedish doctors –one GP and a pediatrician– demonstrates that the syringe’s content was never pumped into the needle injected in the infant’s chest. An alternative explanation, equally bizarre, is that the child was injected with the needle connected to an empty syringe-barrel.

The frame-analysis of the White Helmets video WH Vid-2

Between March 9 and March 10 I studied the video by running it in slow motion.

After I selected the segment, I studied the sequence frame by frame. I took screenshots of the relevant frames in sequence, which also indicated the position on the video in order to allow visualization of the full sequence.

On March 11, I made a 27% slow-motion video sequence, and I sent thereafter the link with the material to the same doctors, colleagues at SWEDHR, which have examined the first material [published in The Indicter on March 6], Dr Leif Elinder and Dr Lena Oske. The video featured the full syringe-episode.

On March 12, I received the feedback of my colleagues, statements which are attached in Section IV below. Furthermore, Dr Martin Gelin –also a senior member of SWEDHR– made post-observations about the laryngoscope positioned on the child’s left wrist/hand.

The same day I summarized the results and published a synopsis of the findings via The Indicter Channel. [12]

‘Lifesaving’ procedures on the children showed in the White Helmets videos were found to be fake, and ultimately performed on dead children.

The syringe used in the ‘intracardial injection’ performed on the male infant was empty, or its fluid was never injected into the child.

This same child showed, briefly, discrete life-signs (uncertain in my judgement) in the first segment of WH Vid-1. If so, this child might have died during the lapse in which the ‘lifesaving’ manoeuvres showed in the White Helmets movie went on. (Which is not the same than affirming that the personnel seen in the videos caused the dead of the infant. In forensic terms, the actual cause of death, as well as the mode and the issue of intent, refer to different items than those treated in our analysis).

[Editors’ Note: This external comment about “likely diagnosis” is not an assessment done by SWEDHR doctors]

I received a reply via email from a medical doctor in the UK. I withhold his name and specialty (not pediatrics) in order to avoid identification, since he expressly asked to remain anonymous, for reasons I understand.

The UK Dr hypothesizes the following:

“I think that even from the very brief video, we can see that this child has a reduced level of consciousness: he does not vocalize, does not open his eyes, and his only movements are to turn his head to one side and to open his mouth before he stops breathing altogether. This looks like respiratory depression, rather than injury to the lungs; he appears to be too sleepy to breathe.  I think the most likely diagnosis is a drug overdose causing reduced level of consciousness and respiratory depression.  Opiates are the most likely class of drug to cause this. Chlorine causes acute inhalation injury, but does not (in any of the sources I have read) cause reduced level of consciousness: the victim struggles to breathe until the end.” [16]

Editors’ Note: This article was updated by the author March 18, 2017. Medical opinions are welcome in the discussion, replication or refutation of the above findings. Email to editors@theindicter.com

[4] Upload by White Helmets under the name “Syrian Civil Defence in Idlib Province”,

The author quotes: “Black banners will appear from the East and they will kill you in a way that has never before been done by a nation.” Many Islamic flags—especially those of militant groups—are black in reference to this hadith.” 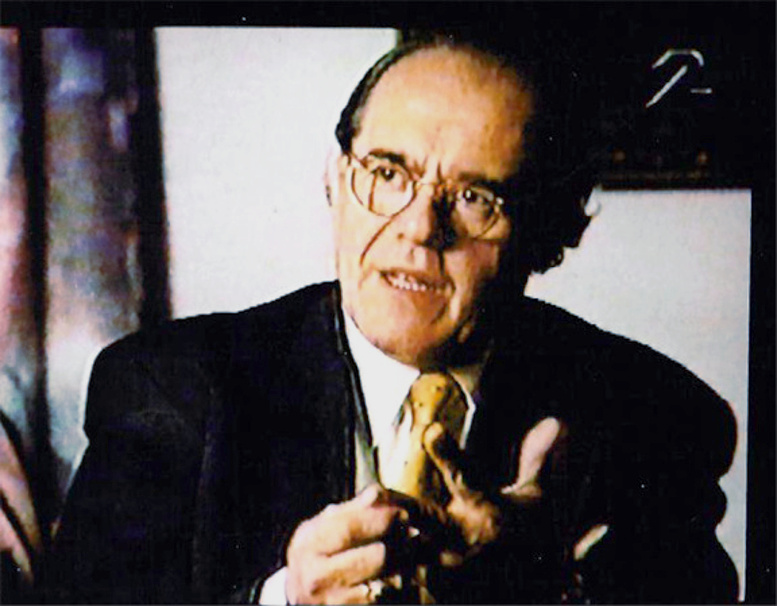 The author: Prof. Marcello Ferrada de Noli (photo at left from interview at the Swedish Television, SvT) is a Swedish professor emeritus, medicine doktor (PhD, Karolinska Institute), and formerly Research Fellow  at Harvard Medical School. He is the founder and chairman of Swedish Professors and Doctors for Human Rights and editor-in-chief of The Indicter. Also publisher of The Professors’ Blog, and CEO of Libertarian Books – Sweden. Author of a variety of books and of research works published in scientific journals. His op-ed articles have been published in Dagens Nyheter (DN), Svenska Dagbladet (Svd), Aftonbladet, Västerbotten Kuriren, Dagens Medicin,  Läkartidningen (Journal of the Swedish Medical Association) and other Swedish media. He also has had exclusive interviews in DN, Expressen, SvD and Aftonbladet, and in Swedish TV channels (Svt 2, TV4, TV5) as well as in international TV and media (e.g. Italy, UK, Norway, Italy TG, Television Nacional Chile, Sputnik, RT, Russia Channel 1, etc.). Reachable via email at editors@theindicter.com, chair@swedhr.org. Follow the professor on Twitter at @Professorsblogg