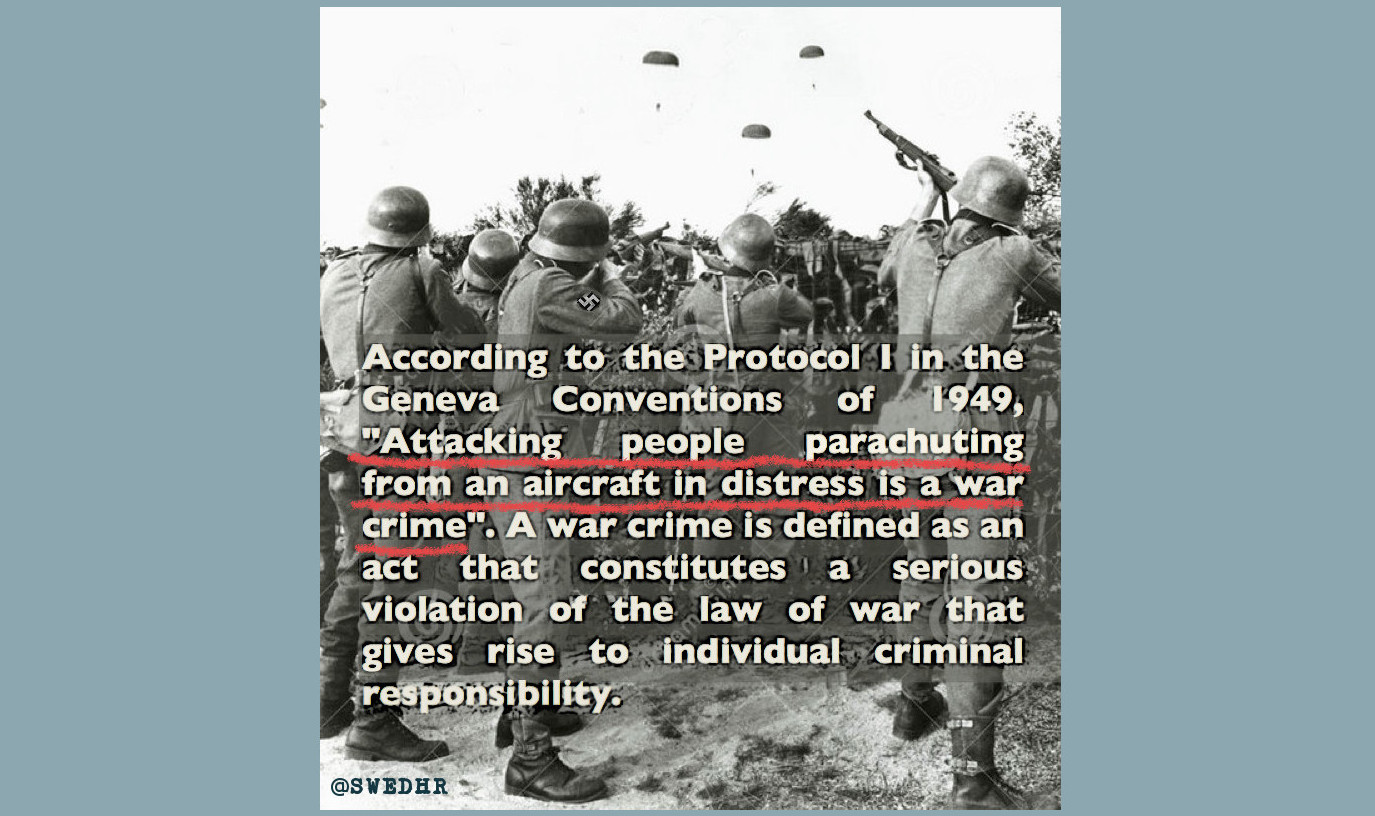 Former Chief of Staff at the U.S. Air Force, Lt. Gen. Tom McInerney, declared 25 November 2015 that he has seen the radar tract on the event, and which indicated that the Russian aircraft was heading south over Syrian territory. General McInerney  concluded on the downing of the SU24, “That had to be pre-planned.“ [His words in video footage further below].

[Go to the update “Geneva Convention: Assassination of the parachuting Russian pilot was a war crime” here.]

A Russian aircraft was in the middle of a scheduled operation aimed to bomb IS formations. While doing this it was intercepted by a Turkish jet fighter and shot-down, whereas the survivor navigator declares that no warning was issued by the Turkish pilots.  The two Russian pilots ejected. One of them was saved by a commando rescue unit. The other pilot – the  aircraft commander – was killed while descending in parachute. New information (26/11) indicates that the operative by the Turkish air force was dome in conjunction with ground operations sustained by the Ankara-backed anti-Assad Turkmen in Syria. In concrete, “a military offensive we started in the mountainous area of  Najiyah”, says to Reuters the head of the forces in the area – a Turkish man.

I will address here several questions about this dangerous event, a) Were the pilots of the Russian aircraft pre-warned on the eventual shot-downing? b) Was the Russian aircraft violating Turkeys’ airspace? c) How was the commander pilot killed, and does the killing of a parachuting pilot constitutes a war crime?

The survivor navigator, Captain Konstantin Murakhtin, declared in the first press conference, as soon he arrived:

– “it was no warning, not on the radio or (otherwise)…there were no contacts. If they have wanted to warned, they could have shown themselves by flying alongside.”

For the sake of my argument, I will analyze the propaganda video released by the Turkish authorities, seen here below. The footage is in a suspiciously HD-resolution of the highest quality, which we are asked to believe was done inside the cabin of the Turkish pilot while engaged in ‘combat-flying’ maneuver. According to this film, the pilot warns the Russian plane that it is approaching the border. The voice says,

– “you are approaching Turkish airspace”

The Western media have said that this message was repeated ten times by the Turkish pilot. But in the official video, we hear only this sentence three times. Moreover, the phrase “you are approaching Turkish airspace” is not repeated three times by the “pilot” voice while times elapses. What do we hear in the video is that the film-maker reproduced the first sentence three times. There is not a single change in the rhythm of the words, the intonation, the ‘syllabus-space’, etc. The sentence lasts exactly the same time in the three “different sayings”. This video seems to be a fake, an amateurishly made fake video.

The survivor navigator emphatically denied that their aircraft was violating Turkish air space. In a videoed interview he complains:

“No way that we’d have violated Turkish airspace. It’s not possible. Not even for one second.” One can hear the statement in the video segment, by clicking on my tweeter below:

“In actual fact there were no warnings at all. Neither through the radio, nor visually, so we did not at any point adjust our course. You need to understand the difference in speed between a tactical bomber like Su-24, and that of the F16. If they wanted to warn us, they could have sat on our wing,” said Murakhtin, who is currently recuperating at Russia’s airbase in Latakia, in northern Syria. “As it was the missile hit the back of our plane out of nowhere. We didn’t even have time to make an evasive maneuver.”

The team had experience navigating in the area. Captain Konstantin Murakhtin declared the following, according to Reuters:

Reuters further informs that US Intelligence has established that the aircraft was downed in Syrian territory.

Former Chief of Staff at the U.S. Air Force, Lt. Gen. Tom McInerney, interviewed in Fox News says that he has seen the radar traction on the event, and which indicated that the Russian aircraft was heading south over Syrian territory.

These are General McInerney’s words:

The Russian aircraft “was heading south to Syrian territory.” And the General added, “That was a very poor judgment from Turkey’s part”.

So, if it were truth that the Russian aircraft was “warned”, according to the US satellite they had complied with the warning and headed south, as required.

Which it would mean that they were simple executed from the rear by the NATO-Turkish air force.

This airplane was not making any maneuvers to attack the territory,” former Vice Chief of Staff of the US Air Force, Lt. Gen. Tom McInerney, told Fox News. And he concludes:

“I don’t really trust President Erdogan in what he is doing,” “I think it was an overly aggressive maneuver and at NORAD [North American Aerospace Defense] command region we would not use this kind of rules of engagement. That had to be pre-planned.” /Source: Fox News Insider, McInerney: “Turkey Shooting Down Russian Plane Was a ‘Very Bad Mistake”

The aircraft did not explode at the moment it was hit, but later as it was going down. This is shown in shown in a video posted by The Indicter in Twitter 24 November, including information from The Aviatonist.com.

If you turn up the volume of the video you will be able to hear automatic-weapons fire in the background (see also down below).

Both pilots were almost certain alive when they ejected. There is no presumption otherwise, because

1) they shared the same cabin at the moment of ejection;

2) the pilots themselves ejected – both can be assumed alive at the moment of ejection. The navigator survived because he was rescued by a friendly commando team. The commander pilot was “found” by Turkish-backed insurgent forces combating both the Syrian government and the Russian Federation which provides aerial support.

In a video uploaded by RT in YouTube, it is seen that the Russian pilot’s body is inert. However, certainly because of respect for the pilot’s family and friends, RT shadowed in the footage the face of the pilot. I made a screenshot of the original uploaded video in which the penetrating injury to the head of the pilot can be seen. I have also partly masked out the face, but a bullet-type wound can be seen in the head.

The point is, the pilot here is surrounded by Turkmen, which do not operate in Turkey; they are in Syria combating the government forces. This fact further brings support to the report that the Russian aircraft was downed in Syrian territory.

In the next image a separate bleeding is notice in the abdomen:

The screenshots above were taken from a video which was fronted with the following image:

In a new released video by Reuters, a commander of an Ankara-backed Turkmen unit in Norther Syria – combating against the regular Syrian Army – acknowledged that they shot at the pilots while descending in parachute. He believed that they had killed both of them, and that soon the bodies were to be brought at the site where the interview was conducted. See the all video here below, click on the image:

A previous uploaded video – now deleted by YouTube – may have been documenting the shooting of the parachuting Syrian pilot, who appears to have been shot at by insurgent forces (unclear if “moderate terrorists” or IS). It shows a likely similar scenario to the the Russian pilot killing of the 24 November 2015.

Here below is the referred footage; click on The Indicter tweeter (best viewed in Quicktime). Regardless the nationality of the downed aircraft, to shot at a parachuting pilot who poses no threat is always a war crime:

According to the Protocol I in the Geneva Conventions of 1949, “Attacking people parachuting from an aircraft in distress is a war crime”. A war crime is defined as an act that constitutes a serious violation of the law of war that gives rise to individual criminal responsibility.

A rationale on the ultimate cause Turkey would have for downing the Russian aircraft can be found in this analysis:

Why Would Turkey Shoot Down Russian Su-24