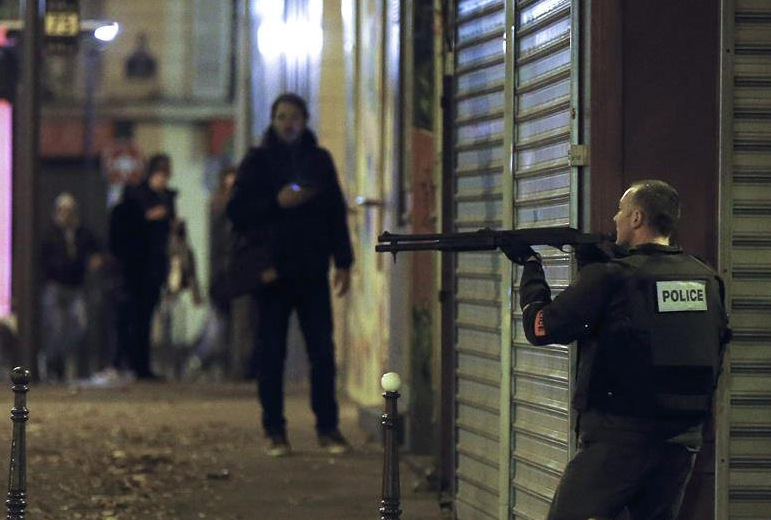 By Gilbert Mercier Since November 13, 2015, France entered a state of shock. Friday the 13th will no longer be only associated with exploitation Hollywood horror flicks, but will become forever linked in the collective psyche to the mayhem in Paris that occurred on that fateful night. It took only about 10 people, plus a […]

Since November 13, 2015, France entered a state of shock. Friday the 13th will no longer be only associated with exploitation Hollywood horror flicks, but will become forever linked in the collective psyche to the mayhem in Paris that occurred on that fateful night. It took only about 10 people, plus a few more to organize the logistics of it, to bring France to a worse predicament than the one that was created by the attack on the editorial staff of Charlie Hebdo in early January 2015. The French press wrote sensationalist headlines stating that the new tragedy, which killed more than 200 people and seriously injured more than 80, was a declaration of war.

The Islamic State in Iraq and Syria (ISIS) quickly claimed the seven coordinated attacks, and some social media accounts linked to ISIS mentioned France as one of its primary targets. As ISIS identified itself as the culprit, the macabre message sent by the organization and its implications for worldwide public opinion was rather simple: we can hit anywhere, at anytime, and any target will be considered fair game. The French government’s reaction was both panicked and swift, and it immediately embraced repressive authoritarian measures similar to those that had been set up by the Bush administration in the aftermath of 9-11-2001. Just like 9-11 in the United States, it seems that the way France’s bloody Friday will be exploited matters more than the tragedy itself. There is no better justification to crack down on civil liberty, freedom and other principles that define the essence of democracy than the good old permanent global war on terror.

French President François Hollande’s cabinet met at midnight and issued some decrees. A nationwide state of emergency was declared, as well as the establishment of tight control at all French borders. The mayor of Paris gave Parisians the formal instruction to stay at home, and within a few hours, civilians deserted the usually lively streets of Paris, which instead became populated by the ever growing members of France’s massive security apparatus: heavily armed police, SWAT teams and military. A decree similar to the USA Patriot Act was hastily put together to allow searches in all buildings and private residences, and the preemptive arrest, without probable cause, of any individual deemed by French authorities to be suspect or dangerous. The notion of dangerous is, of course, vague and elastic and could potentially apply to anyone, including political dissidents.

The show of support for the people of France was immediate and overwhelming, in mainstream and social media. This worldwide Francophilia outbreak in statements, and by the illumination of countless landmarks throughout the world, felt a bit contrived and obnoxious. Considering the ever shrinking global public opinion attention span, the brisk popularity of La Marseillaise, clumsy peace flag avatars featuring the Eiffel tower, and the orgy of blue, white and red will be short lived. In the typical neocolonialist bias of news coverage, the attacks in Beirut, Lebanon, which occurred Friday as well and targeted Hezbollah-controlled areas, killing at least 40 people, were merely noted in the Western press, rather than treated as an ongoing tragedy that deserved extensive follow up and expressions of sympathy. The unspoken and despicable message sent by the press was that the loss of French lives mattered quite a lot more than the loss of lives of people in the Middle East.

One can understand what such a blatant differentiation of compassion can trigger in the mind of a young French person of Arab origin who is usually at the very bottom of the French socioeconomic food chain. People with such grim social prospects are prime and easy targets to become jihadists for ISIS. Islam fundamentalism allows them to act out their deep anger toward a society from which they have been largely rejected. For decades, young French people of Arab origin have been treated like outsiders from within. Consequently, they can be indoctrinated to do the unthinkable and embark on suicide missions. While inclusion and a sense of real prospect for a better future could be a remedy for France’s deep social malaise and eventually make jihad less attractive to young French people of North-African origin, the road being taken by most of France’s political class and ruling elite is the dead end of repression and exclusion.

For the sake of the European Union’s survival, France, and Europe in general, should drastically rethink its failed policies. The Paris attacks should be regarded as the symptoms of a systemic failure. The random murder sprees committed in Paris cannot be excused or justified in any way, but they can be explained. Disenfranchised young French-Arabs know and feel the misery that their brothers and sisters in the Middle East have suffered in Iraq, Libya, Syria and Gaza from the guns and bombs of the US and its European sidekicks. The confusion from that pain gives them the warped sense that ordinary Parisians should also suffer. France has unfortunately been a diligent little helper of the Orwellian Empire, not only in the Middle East but also in Africa, since electing Nicolas Sarkozy president in 2007, and becoming a NATO member again in 2009. Actions have consequences, and the Paris victims can be viewed as yet more civilian collateral damage — not more or less important than the innocent victims of US drone attacks in Pakistan or Yemen — in a world where the net result of absurd Western policies is always the spread of misery and death.

Published in agreement with author Gilbert Mercier.  This article was previously published in News Yunkie Post, Nov 15, and by Counter Punch, Nov 15, 2015.