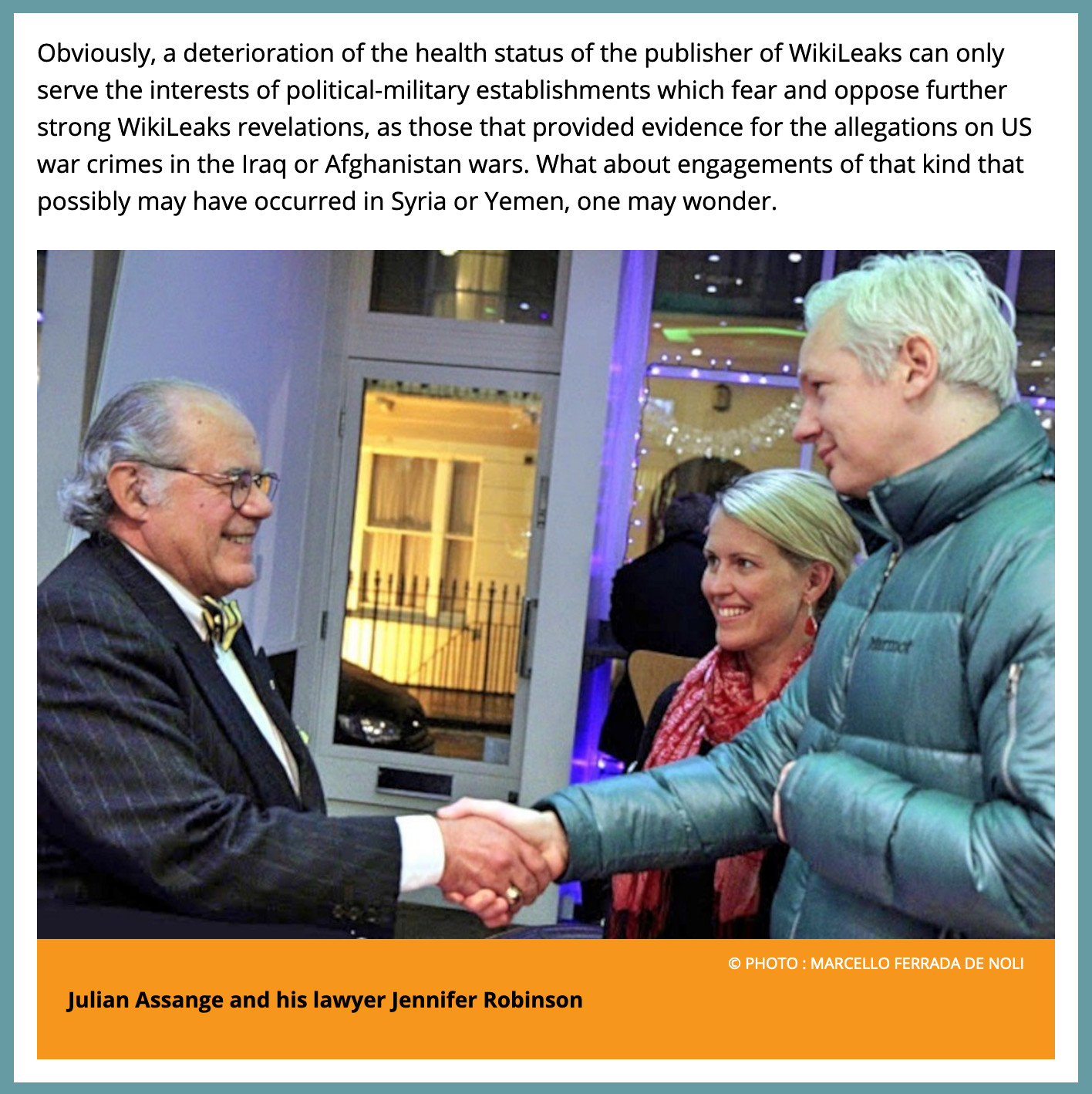 Sputnik spoke about Julian Assange’s case to Professor Emeritus Marcello Ferrada de Noli, the founder of the NGO Swedish Doctors for Human Rights, SWEDHR. * Sputnik: What is behind Ecuador’s move to change its ambassador in the United Kingdom? Why has Moreno taken the step now? Marcello Ferrada de Noli: The background of the Assange case, now maintained for over eight […]

Sputnik: What is behind Ecuador’s move to change its ambassador in the United Kingdom? Why has Moreno taken the step now?

Marcello Ferrada de Noli: The background of the Assange case, now maintained for over eight years, may not be quite known by the public. A less publicized document around the Snowden revelations revealed that in 2010 — this means after “Collateral Murder” and the “Afghan Logs” published by WikiLeaks, US military leaders in contact with their counterpart powers participating in the Afghanistan war under the US-command, asked them to pursue a prosecution of Julian Assange. Of these countries, only Sweden complied.

The case has therefore never been a “legal case”, but purely political in its administrations, and obeying to geopolitical interests. On its development, the case has grown further to other spheres of global dimension: The attacks to WikiLeaks and the impeachment against its publisher Julian Assange have nowadays conveyed determinant survival issues for the Freedom of Speech principle, the freedom of information, added the ethics of Western journalists in regards of reporting or non-reporting precisely about all those press-related issues.

The now suddenly deposed Ecuador’s Ambassador in London, Carlos Abad, has been a career diplomatic since 1971 and served also as Ecuadorian ambassador or top diplomat in India, France, Austria, Peru, the Caribbean countries, etc. So, he is not a political “appointee” of the former government of Rafael Correa, and therefore his removal by President Moreno cannot be explained for reasons of domestic praxis of changing politically appointed ambassadors on the cause of newly elected administrations.
Furthermore, the same Constitutional Decree N° 147 called by Moreno to “terminate services” of Abad in London, also allows the president to appoint Abad in another diplomatic mission —which did not occur.

The above summed the known economic agreements between Moreno and the US government —which deepened the dependence of Ecuador towards the US and through it, to NATO countries- calls for other explanations.

In a meeting in London 2017 with Ambassador Abad, to which he kindly invited me, he told me in the presence of the embassy’s political adviser in London about his concerns on Assange’s risk for a deteriorating health status. I perceived the ambassador as a human and engaged diplomat. And I believe that provided nothing really significant could be done since then to ameliorate that risk, any directive on that regard must have come directly from Moreno’s desk, not from Ambassador Abad’s.

Obviously, a deterioration of the health status of the publisher of WikiLeaks can only serve the interests of political-military establishments which fear and oppose further strong WikiLeaks revelations, as those that provided evidence for the allegations on US war crimes in the Iraq or Afghanistan wars. What about engagements of that kind that possibly may have occurred in Syria or Yemen, one may wonder.

Thirdly, we have that Ambassador Abad was known for his efforts to reach a settlement with the UK authorities about Julian Assange, and which would prevent the extradition of Julian Assange to the USThe question being, would be the UK really interested in finding a solution which may result in avoiding that extradition? My answer is plain, no. The UK is equally interested in silencing or worsening WikiLeaks publish endeavour.

Furthermore, I see quite similarities between the British authorities’ behaviour on that issue, and the one adopted by its Swedish counterparts which I have studied thoroughly. In my book Sweden VS Assange — Human Rights Issues, where I have described how the trumpeted accusations against Assange, added the artificial or unjustified protracting of the prosecutor’s procedure, only aimed to give the US administration opportunity to complete their indictment. Instructions may have come, for instance, through the then US Justice Minister, Eric Holder, who travelled to Stockholm to lecture his Swedish counterpart precisely on the days the Assange case was due to be dropped in Sweden.

Another similarity has been the use of “processual” arguments to delay the freedom of Assange (requested already by the UNGA, a UN body). In the case of Sweden was to allege a false prohibition to interrogate suspected persons abroad, and in the UK case is the retention of Assange on the base that he would not have followed a duty to report to a police station during the Swedish issued of the international arresting warrant, even when that that order not any longer exists (ultimately the Swedish authorities were forced to withdraw the accusations against Assange, when it was proven unfeasible that they would stand in any court).

And due to whichever artificial “legal” resource, Assange is still in London waiting for the implementation of the same US indictment that motivated the process in Sweden.

Sputnik: How concerning is this development for Assange? Will it signify his eventual expulsion from the embassy?

Marcello Ferrada de Noli: In the worst of cases, the current Ecuadorian government may finally pursue the termination of the political asylum of Assange by Ecuador, arguing that Mr Julian Assange would have not complied with the terms of their hospitality, for instance, Mr Assange’s alleged continuation of a publication endeavour that the government of Moreno may consider it harms the relationship of Ecuador with a “friend country”.

However, that also would be a feeble argument, and that in fact that would go against the commitments done instead by the the Ecuadorian government itself, when they grounded the political asylum to Assange on humanitarian reasons, and explicating that such an asylum would prevent Mr Assange to be extradited to a country in which a death penalty is an option in cases where US authorities would relate the prosecution if Mr Assange to issues of national security, for instance, penalized in the Espionage Act.

Sputnik: The departure of Abad leaves Assange virtually surrounded by people he does not know which some see as a sort of ‘psychological torture’. How grounded is such an assessment?

Marcello Ferrada de Noli: Independently of those personnel changes, the conditions of such a protracted staying at the embassy, without the possibility of even taken some steps under the sun, without proper medical attention —even if the previous administration has done their best to provide that attention at the embassy’s compound- all that is enough to constellate a situation of “psychological torture”. Let us not forget that in the core of the experience of torture under captivity, we find the uncertainty on when the next episode would arise, or whether those torture episodes would ever stop, or if they would evolve to be terminal in terms of the life of the individual suffering that torture. I know what I am talking about.

To the above should be added the constant threat of extradition first from Sweden to the US, then from the UK to the US, and now a possible extradition facilitated with the assistance of the very government that granted asylum against that contingency. He had to even face the possibility of a storming to the embassy, as suggested for instance by a highly publicized report in Newsweek magazine.

With unpredictable fate regarding his life, all that would very well constitute a sum of severe stressors.

With all that considered, when I last met personally Julian Assange, at the Ecuadorian embassy in London August 2017 — in the period when that was still possibly — I found remarkably that in spite of visible health issues he was so strong in his spirits, and with his personal integrity at the top, as always. His message was of optimism and solidarity.

The views expressed in this article are those of the speaker and do not necessarily reflect those of Sputnik.