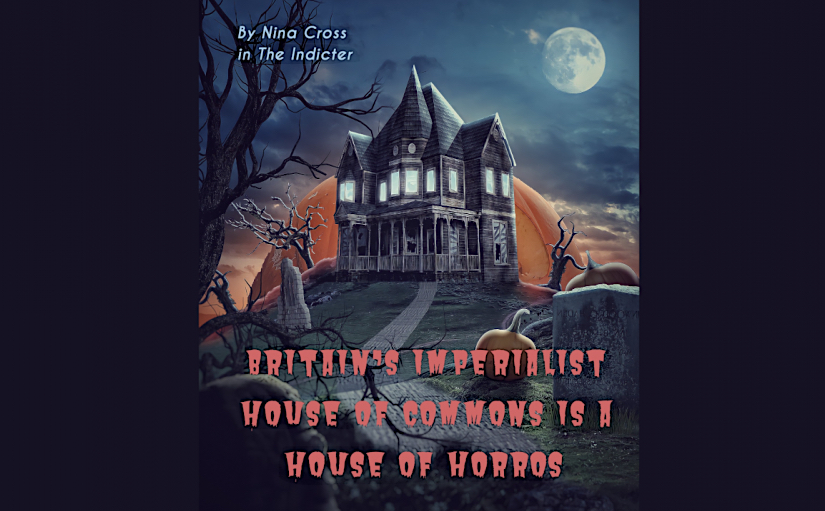 The sprint for the biggest NATO swat spot: How much do British people realise that not just their government but the entirety the House of Commons is in a proxy war with Russia through Ukraine, either aggressively cheerleading from the front or, in a few cases, forced to capitulate?  In fact, the Tory government of Boris Johnson and the Labour Party, opposition in name only, under Keir Starmer, are in a competition to be Britain’s biggest NATO swat.

Starmer’s immediate response, on Russian forces entering Ukraine, was to defer to NATO and “cripple the ability for Russia to function”, a far cry from any notion of peace or political and diplomatic resolution.  Labour has since been trying to out-NATO the Tories, frequently reminding us through corporate media articles that it founded the organisation in 1949.   Labour leaders were vehemently anti-Soviet and anti-communist and today are vehemently anti-Russia. In fact, so keen to establish himself as NATO gold badge holder, Starmer has warned any dissident Labour MPs that they will lose the party whip and be kicked out if they stray from the war path.   MPs must swear allegiance to NATO or be gone.  As a result, those Labour MPs that made a little noise at the start with a mere statement challenging NATO aggression were muzzled and immediately surrendered.

Zelensky Zoom night in the little House of Imperialism

British MPs packed into the House of Commons on 8th March for a Zoom call from Ukraine’s President Zelensky, asking for more weapons and a no-fly zone over Ukraine.  The speech by Zelensky guaranteed a big turnout, “…every Parliamentarian wants to hear directly from the President”, claimed the speaker of the little House.  And rules that apply to elected British MPs were waived for the special visitor that night.  Despite MPs being blocked from House Zoom meetings during Covid lock-down for wearing sweaters, or not having their top button done up, Zelensky set a precedent for T-shirts.  British MPs should take full advantage.

With the little House filled to capacity, each MP could demonstrate their full allegiance to the NATO war machine, the arms industry and the sacrifice of the people of Ukraine in the campaign by the Imperialist western bloc, led by the US, to destroy Russia.

The Zoom call event was a huge propaganda stunt.  The little House provided a stage on which Zelensky, recipient of vast unexplained wealth, capitulating with Ukrainian ultra-nationalists and Nazis, oligarch financiers and powerful Western leaders, could cleverly imitate Winston Churchill and provide fuel for NATO’s proxy war against Russia at the cost of his own people’s lives.

The Zelensky appearance at the House of Horrors was a demonstration of bipartisan imperialist foreign policy.  It was signalling that Johnson has complete impunity to sacrifice Ukrainians and to continue NATO’s project to destroy Russia.  Regarding the devastating effects on the British people,  all are silent.  The pre-existing economic crisis  combined with the wide-spread repercussions of the proxy war in Ukraine,  framed as “consequences of Russia’s war of aggression against Ukraine”and the impact of the US EU sanctions against Russia, will all be financially disastrous for the population.  The rocketing increase in fuel and the cost of living will likely result in a high death toll of the elderly and poor in the coming winter months, as well as a rise in poverty.  But the beacon of British so-called democracy, the imperialist House of Horrors, is too invested in seeing Russian blood at the cost of Ukrainian blood to protect the food security and living standards of its own people.

Boris Johnson is a liability for Britain and the world. Fined for breaking his own laws during the Covid pandemic lockdown, and caught lying about it – both ministerial code violations that require his resignation – he is acting as a reckless opportunist, milking the misery of the Ukrainian people to promote himself politically and save his career.

Johnson has been instrumental in recking the chance for peace.  He suddenly arrived in Kiev on April 9th at a time when Ukraine was holding talks with Russia.  Zelensky was seeking security guarantees from major powers, in return for Ukraine’s declaration of neutrality and pledge not to host foreign military bases.  This had the potential to lead to a ceasefire.  Enter Johnson and the talks were derailed.  Zelensky could not have his security guarantees, with Johnson convincing him to stick to the NATO agenda in what appears to be a mix of bribery and coercion tactics.

Neither can the date of Johnson’s visit to Zelensky be ignored.   It occurred the day after the massacre at Kramatorsk train station, when a Tochka-U missile attack killed many dozens of people.  Johnson immediately called it a Russian war crime.  A few days earlier, he also accused the Russian forces of crimes “not short of genocide” following a massacre in Bucha.   Without any independent investigation, Johnson immediately claimed these were both Russian atrocities,  both occurring during the crucial peace talks between Ukraine and Russia.  Not only was it illogical for Russia to carry out such atrocities while attempting to bring about a ceasefire, but analysis by experienced experts provides reason to believe both massacres were carried out by Ukrainian, not Russian forces.  Here is a link to an analysis of the Kramatorsk atrocity, with analysis of its trajectory of travel, and these images show the victims at Bucha wore white armbands, indicating they were friendly to the Russian forces, and therefore were likely to be viewed as Russian collaborators.

But all the blame of derailment cannot be laid at the feet of Boris Johnson.  He has the full backing of the House of Commons; defunct and dysfunctional in regard to matters of peace and to the welfare of its own people.  It is led by warmongers and liars.  Indeed, the British leaders’ impunity  to lie and deceive is enshrined in the little rule book of the House of Horrors.

After sabotaging the chance for a ceasefire in Ukraine by refusing to give security guarantees, Johnson offered security guarantees to Sweden and Finland, in a move designed to further frustrate Russia.    It seems that Johnson also went to Sweden and Finland to pressure both countries into joining NATO, which both governments have agreed to do,  readily compliant under Western imperialist coercion.  That the lying, law-breaking Johnson with his political back against the wall can so easily acquire acquiescence shows the weak and servile nature of the neoliberal Finnish and Swedish governments.  The fact that neutrality has given them years of stability, should confirm to them neutrality works and instead of throwing it away themselves, see the value of a neutral Ukraine.  We should also recognise that neither government has a national mandate  through which it can justify joining NATO.  We see more and more that the Ukraine project is in the interest of a very small group of extremely powerful and wealthy class, all too ready to see whole populations as disposable in their dangerous adventurism while those weaker western governments buckle under the demands of the stronger. These are the real enemies of the people of Britain, Europe and the world.

Boris Johnson, unleashed upon Europe, is likely to continue wreaking havoc.  It is important to recognise the damage Britain is doing by prolonging and escalating the misery of the Ukrainian people, destabilising Europe, creating a refugee crisis, impoverishing its own people and people across the world – all for the Ukraine project of western imperialists, led by the US with Britain at its side.  And we have seen craven aggression before from British leaders Tony Blair and David Cameron, with full impunity for their bloody adventurism secured by a complicit House of Commons.  Only this time the target has nuclear weapons.

Author Nina Cross has published investigative articles in The Indicter and several other independent media outlets. A significant project involves a series of F.O.I. requests to various British institutions in regard to Julian Assange and other relevant international political and human rights issues. Nina Cross graduated from London University, and is pursuing a Master’s degree in translation studies. She has been  acting editor-in-chief of The Indicter. Here she is found on Twitter:  @NinaCross21

Cover image (background) based on “Haunted house”, by Raphael Ofagbe from Pixabay