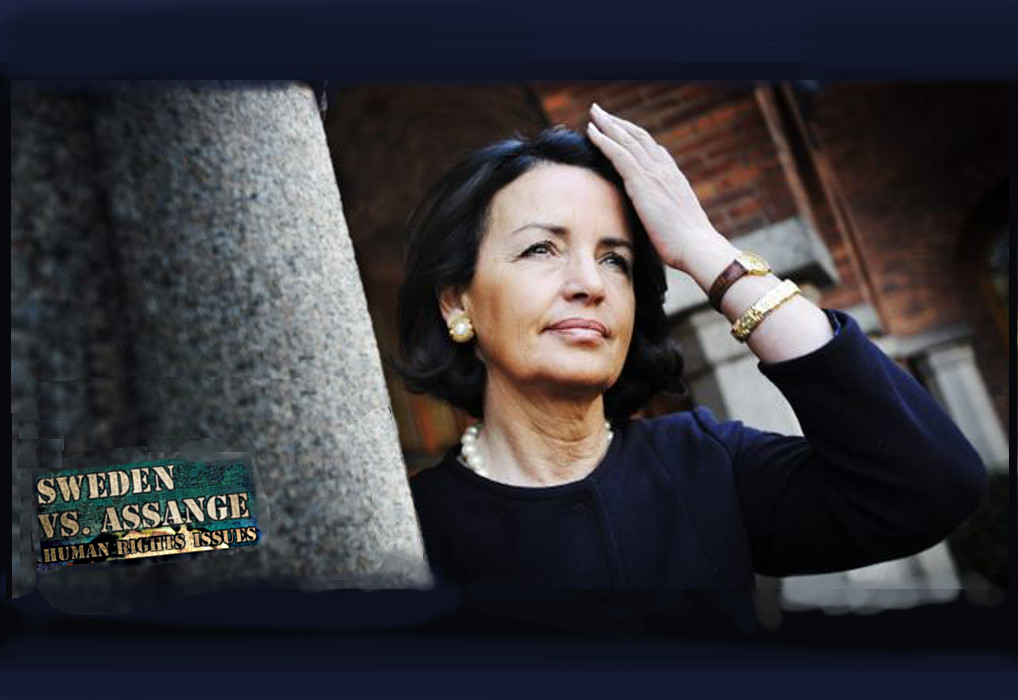 In “Assange –a bizarre story– which demands Swedish response”, the Secretary General of the Swedish Bar Association, Ms Anne Ramberg, criticizes prosecutor’s deeds in the pre-investigation of the case, and says that Sweden has a great responsibility for the situation that has arisen.

Ms Anne Ramberg statements were published 14 of April i

“My knowledge about this matter, now an almost unique one, is not entirely in-depth.  It is a matter featured by everything from prodigal conspiracy theories deprived of any reality support, to a deplorable legal handling from both Swedish and British side.

The right to a fair trial within a reasonable time is established both in the Swedish legal system [Regeringsformen, 2 kap. 11 § andra stycket 1) and in the European Convention (Article 6). This legal right also applies during the preliminary investigation stage. To this has to be added the so-labelled presumption of innocence. It may well be questioned whether the result of the Swedish managing [of the case] was done in accordance with the principle of proportionality. I have previously stated that I find it remarkable that the Prosecutor did not implement the preliminary investigation forward at the pace and with the care one could have demanded. In this context, the courts have a very great responsibility. They could have put tougher demands on the prosecutor, to move the preliminary investigation forward. The conclusions that the prosecutor had as ground to dismiss the case [the pre-investigation], should also have been communicated considerably earlier than what happened. This leads to the conclusion that Sweden has a great responsibility for the situation that has arisen. Now the question is whether Sweden should resume the preliminary investigation that prompted Assange’s asylum request to Ecuador –and his subsequent involuntary lock-in–, and demand his extradition to Sweden.

I fear that the treatment of Assange has damaged the reputation of the Swedish judicial system, even though Assange did not actively contribute to participate to any significant extent. That being said, I have sympathy for Assange’s concern that Sweden would acquiesce with the United States in the event of a request for his extradition. One can only speculate on this. I am of the personal opinion that the Supreme Court would not extradite Assange to the United States. If my assumption is correct, a Supreme Court review [of the extradition case] would result in that Assange could not be extradited,  even if the government so wished.

Let us not forget that whatever we may think of Assange or the deeds he is suspected of, this is about much more. It is about freedom of speech and the rule of law principles. It is ultimately about the right and the moral obligation to expose war crimes. Assange and Wikileaks did it. The revelations about US abuse were necessary and particularly important. Should we extradite to Germany’s Hitler someone who has revealed the existence of concentration camps and genocide, regardless to how that information was obtained?  I don’t think so.”