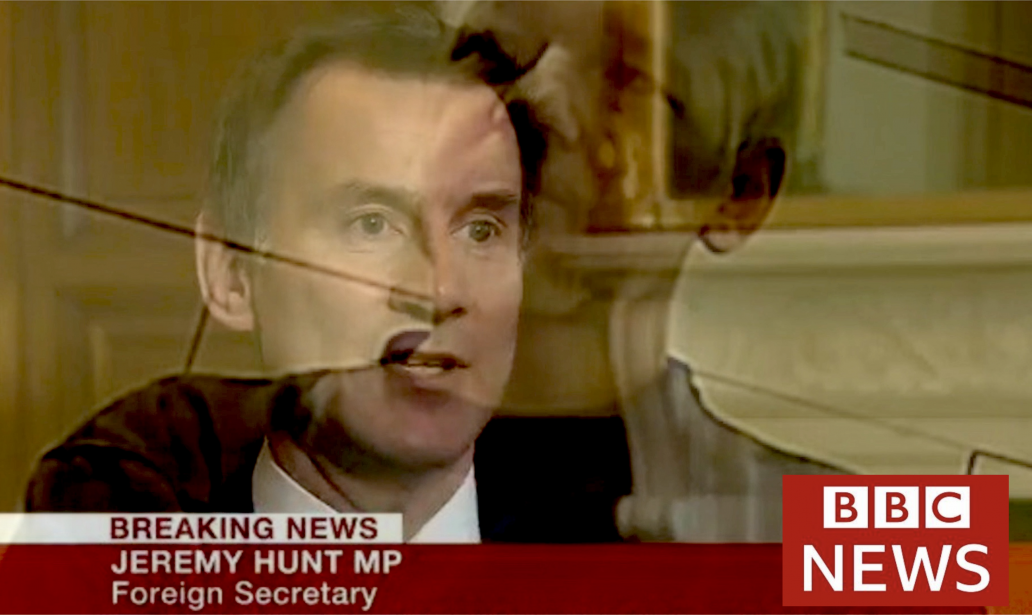 Acting chief editor of The Indicter

This article revisits the ‘The role of the BBC in the state-sponsored persecution of Julian Assange. Part 1’ in light of relevant FOI responses we have received from the British government (linked to below). They confirm that Jeremy Hunt’s BBC interview on 11th April 2019 was specifically arranged in the Foreign Office for the purpose of commenting on Assange’s arrest.  Assange was arrested for the minor offence of breaching a police bail in 2012 as the result of seeking political asylum in the Ecuadorian embassy. He feared persecution by the US government for Wikileaks’ publication of evidence showing US war crimes.

In order to recognise the significance of Hunt’s statement and its impact on Assange, we can measure it against the ECHR’s understanding of how the right to freedom of expression (Article 10 of the European Convention of Human Rights) can impact on the right to a fair trial (Article 6 of the same Convention):

“Article 10 of the Convention, includes the freedom to receive and impart information. Article 6 § 2 cannot therefore prevent the authorities from informing the public about criminal investigations in progress, but it requires that they do so with all the discretion and circumspection necessary if the presumption of innocence is to be respected…The Court has emphasised the importance of the choice of words by public officials in their statements before a person has been tried and found guilty of a particular criminal offence …As to press campaigns against an accused or publications which contain accusatory aspects, the Court has noted that these may prejudice the fairness of a trial by influencing public opinion and, consequently, the jurors called upon to decide on the guilt of an accused…”

With this clarification by the ECHR in mind, Hunt’s comments on Assange can be examined:

“No one is above the law. Julian Assange is no hero.  He has hidden from the truth for years and years and it is right that his future should be decided in the British judicial system.  What has happened today is the result of years of careful diplomacy by the foreign office and I commend particularly our ambassador in Ecuador, and Alan Duncan and his team here in London for their work but also the very courageous decision by President Moreno in Ecuador to resolve the situation that has been going on for nearly seven years I mean it’s not so much Julian Assange being held hostage in the Ecuadorian Embassy, it’s actually Julian Assange holding the Ecuadorian embassy hostage in a situation that was absolutely intolerable for them so this will now be decided properly, independently by the British legal system respected throughout the world for its independent and integrity and that is the right outcome.”

There are no specific facts in Hunt’s statement regarding any charges, crimes or convictions.  His comments “no hero” “hidden from the truth” “holding the Ecuadorian embassy hostage” “absolutely intolerable” are speculative opinion.  His statement is designed to provoke disgust.

As we asked in Part 1 regarding the government’s statements the day Assange was arrested, what possible proportionate and legitimate reason could exist allowing senior ministers to make multiple public statements across government and which infer guilt: “It is only right he is facing justice.” “No one is above the law”.   The issue of public interest could have been addressed with a single objective statement of fact on Assange’s arrest.  But this was not about public interest; it was a strategy to protect the actions of the Ecuadorian government which had unlawfully stripped Assange of asylum.  It was a coordinated campaign by the senior Cabinet ministers to paint Assange as a serious criminal who should “face justice” thereby setting the scene for the US Department of Justice to launch its attack on Assange and set in motion the process to criminalise investigative journalism.

Returning to the ECHR case of the Russian Khodorkovsky discussed in Part 1, the ECHR found that Putin did not violate Khodorkovsky’s presumption of innocence because his comments about Khodorkovsky were made off the cuff, at a presser involving random questions.  The ECHR ruling also took into account that Putin made comments (“A thief should be in jail”) and then explained his reasons: Khodorkovsky had been convicted of a crime.  The case of Jeremy Hunt is the polar opposite: he delivered a prepared opinion statement that smeared Assange and set the scene for his persecution in the courts and prison system.

The political interference in the media coverage of Assange continued the following day. According to Alan Duncan, junior Foreign Minister who engineered the forced removal of Assange from the embassy, a violation of international law, the Daily Mail run a “hit piece” on Assange with his help.  Duncan’s boasting of putting the Ecuadorian ambassador in touch with the Daily Mail demonstrates the irrelevance of the ‘official route’ of the government-media relationship, the façade of transparency. In reality, powerful politicians will use their own networks and media allies to manipulate public opinion.  Following Assange’s arrest, we had a demonstration of how they manipulate and smear for political gain using both official and unofficial routes.

If we expected evidence of the “horrid squalor” and “beyond repulsive” living conditions claimed by the Daily Mail and Duncan about Assange, we are to find none in the ‘hit piece’.  Daily Mail images of a few pieces of cutlery and crockery in what is basically a clean kitchen, showing clean tiles and clean work surfaces show the extent of the “fetid lair” and “full squalid horror” of Assange’s living space in the Ecuadorian embassy.   The images were possibly taken just after Assange had eaten, and possibly screen shot from a still taken from illegal surveillance or taken on the day of his arrest.  We are also shown a picture of a clean toilet and told that weeks before it had soiled pants stuffed in it.  It appears that despite all the surveillance of Assange over all that time, only pictures of some washing up could be published while the faeces narratives in the Daily Mail piece came from the Ecuadorian ambassador, the one individual whose “principal mission” was “to get Assange out of the embassy”.  It is difficult to imagine a more dehumanising and vindictive piece of tabloid smearing, designed to provoke public disgust.

Should Assange’s case ever go to the European Court of Human Rights, the malevolent manipulation by politicians should be laid bare.  The extent to which senior politicians have abused their office to interfere with and frame public opinion of Assange should be set out in the Court, as should the role of the British corporate media. The connivance of politicians through the use of the media is further evidence that the persecution of Assange is state-sponsored and has relied on networks and relationships between powerful individuals in public office and powerful media figures and institutions.

The defamation of Assange’s character by the British government is institutional; to this day, over two and a half years after he was rendered by hostile states and placed in high security Belmarsh prison, treated as a terrorist, the government continues its disinformation and smearing campaign against him, as seen on the government website:

“The Wikileaks founder was arrested at the Ecuadorean Embassy this morning after Government of Ecuador revoked his asylum status. Assange has spent the last seven years taking refuge in the embassy, to avoid extradition, first to Sweden, on an rape charge since dropped, but more recently to the USA.”

But only through the complicity of the corporate media has this abuse been possible.  Without its sustained collusion and servility, the powerful would not have impunity; they would not dare attempt what appears to be the slow assassination of a journalist in full public view for exposing their crimes.