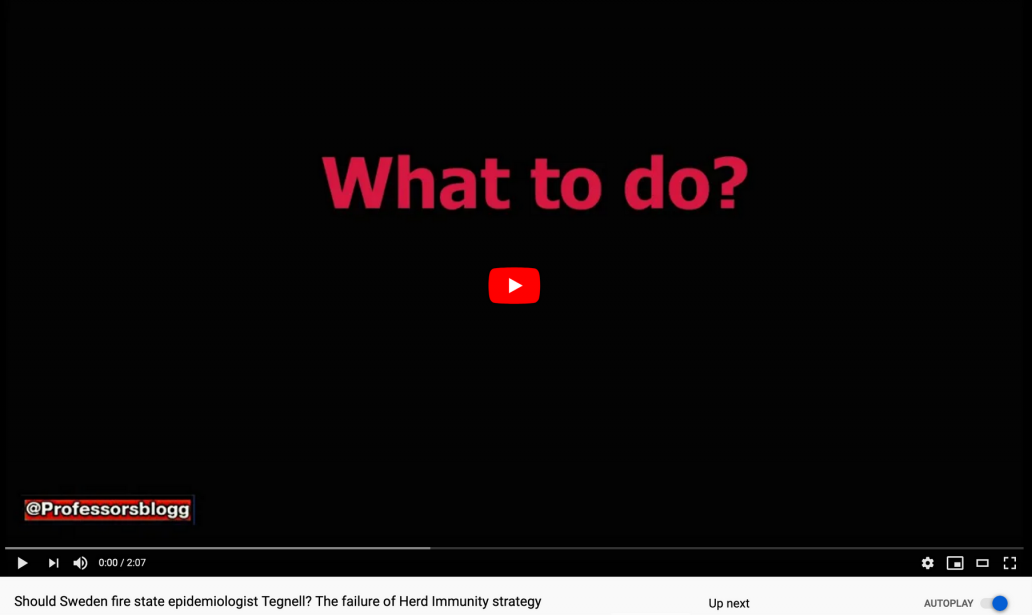 [Watch video down in this page]

Published first in Consortium News as “COVID-19: How Trustworthy and Humane is Sweden’s Pandemic Strategy?” 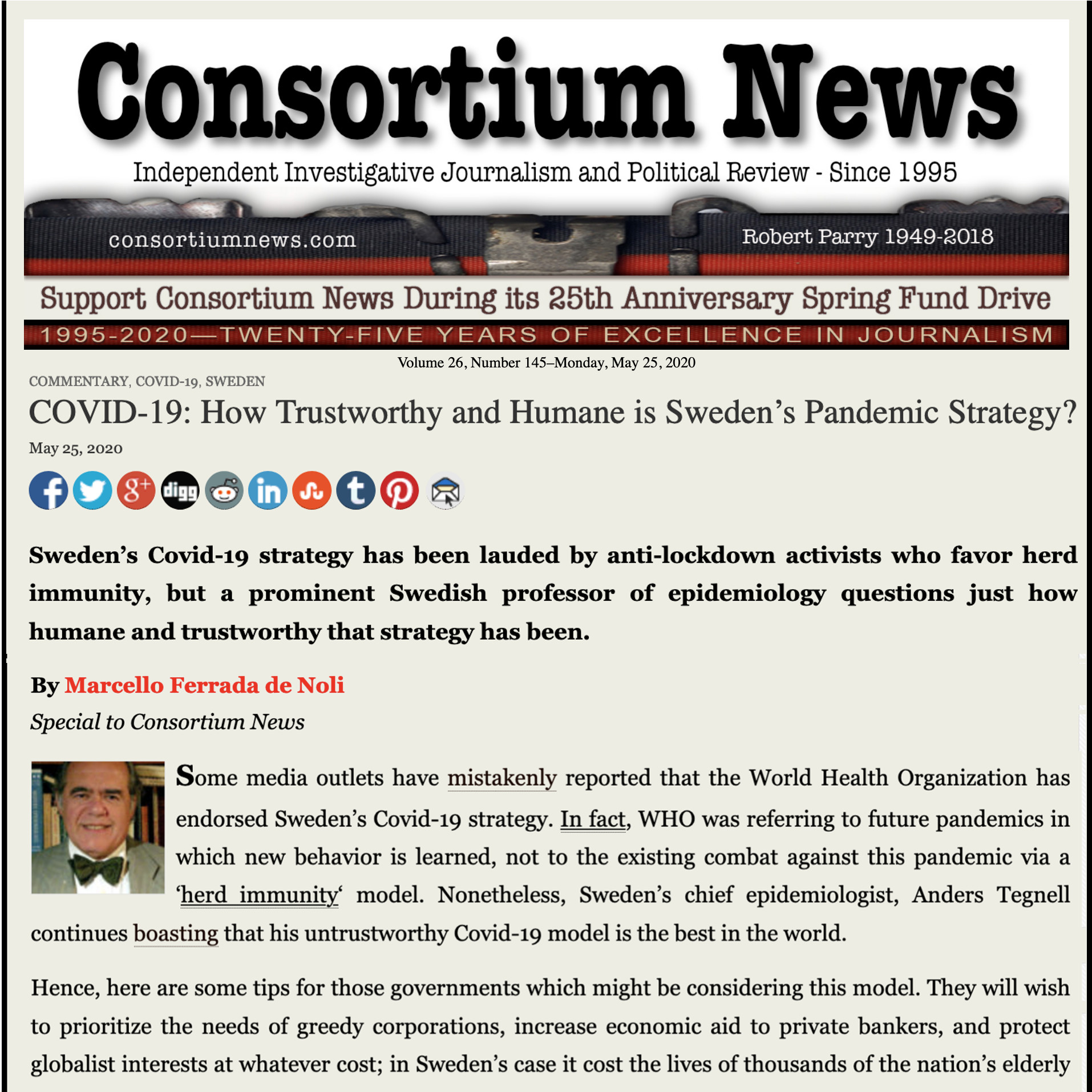 Some media outlets have mistakenly reported that WHO has endorsed Sweden’s COVID-19 strategy. In fact, WHO was referring to future transition phases, not to the emergent combat against the pandemic via a ‘herd immunity‘ model. Nonetheless, Sweden’s chief epidemiologist Anders Tegnell continues boasting that his untrustworthy COVID-19 model is the best in the world.

Hence, here are some tips for those governments which might be considering this model.  They will wish to prioritize the needs of greedy corporations, increase economic aid to private bankers, and protect globalist interests at whatever cost; in Sweden’s case it cost the lives of thousands of the nation’s elderly and poor.

Corporate proxy epidemiologists may be favouring a herd immunity  approach for the sake of business-as-usual. But if their experiment allows the elderly to die in “horrifying” suffocation because oxygen is not provided for them – as  witnessed   by Ms Latifa Löfvenberg, a registered nurse in Gävle, Sweden, (The Indicter Channel, 3 May 2020) – we are entering another level in this discussion.

Here are some tips

Hide the epidemic’s real death toll by “officially” counting only victims that were tested and “verified” at the laboratories you have arranged a deal with. Instead of counting all Covid-19 deaths, for instance, leave out those COVID-19 deaths occurring in private and nursing homes and only include those occurring in hospital settings.  Deaths occurring in in private and nursing homes in the community are not included in the statistics presented by the Swedish Public Health Agency.

Hide the epidemic’s real death toll by “officially” counting only victims that were tested and “verified” at the laboratories you have arranged a deal with. Instead of counting all Covid-19 deaths, for instance, leave out those COVID-19 deaths occurring in private and nursing homes and only include those occurring in hospital settings.  Deaths occurring in in private and nursing homes in the community are not included in the statistics presented by the Swedish Public Health Agency.

Hide the real Covid-19 cases by only performing tests on a limited number of the population. Be the country of your region with the fewest Covid-19 tests per capita carried out. Less testing, fewer tests to send for verification. It’s that simple. 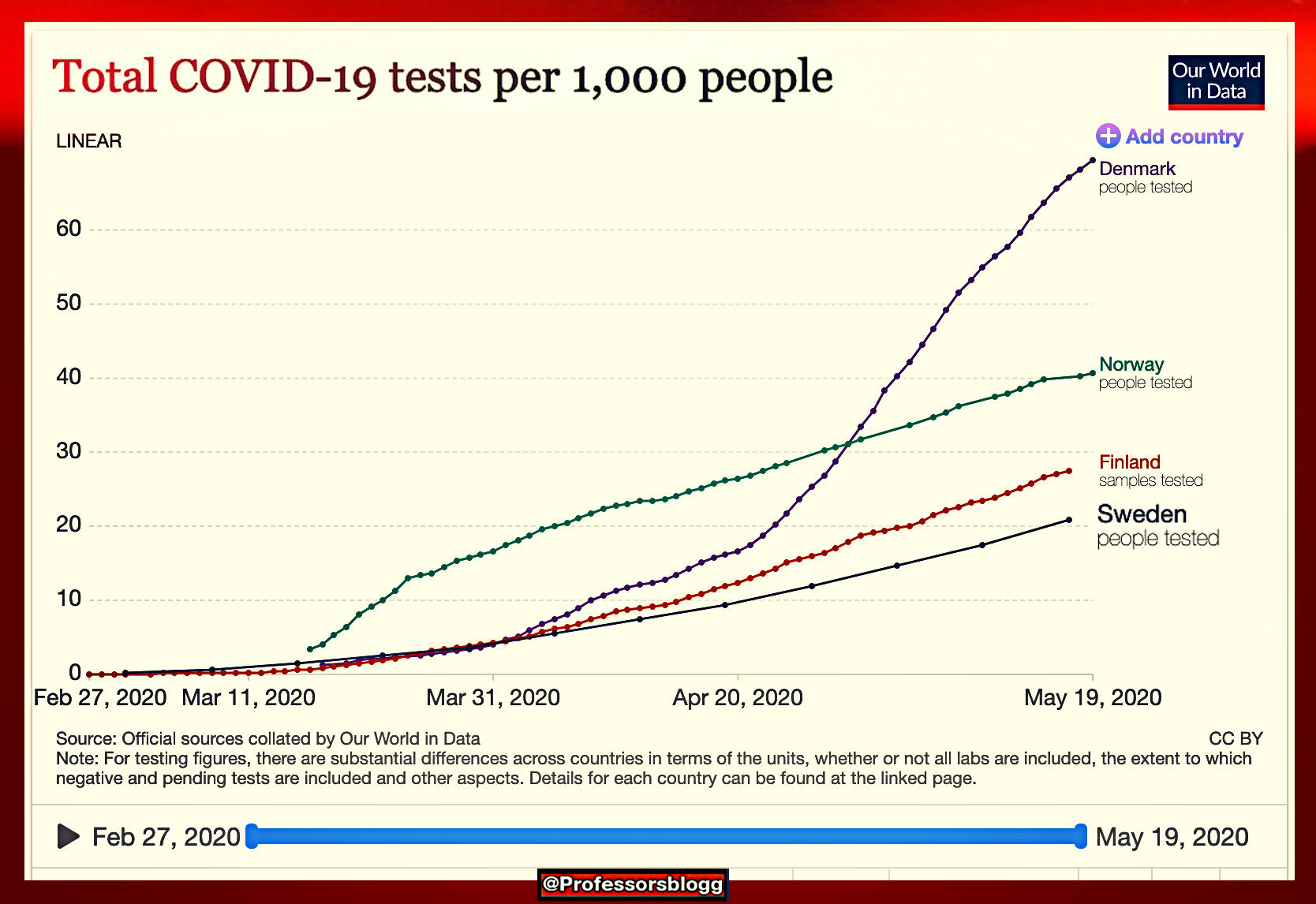 Do not include in your total death toll the fatalities which doctors have diagnosed as with COVID19 in the death certificates they have issued. Otherwise the real death toll will show that is about ten percent higher (as indicated by figures provided by the National Board of Health and Welfare, Sweden’s official statistics on causes of death).

Do not issue any directive to the personnel or staff responsible at nursing homes about wearing masks or protective gear while caring for the elderly. Say instead that those decisions are free to be taken locally. In other words, your national public-health and health-care authorities should not issue any directive on masks for protecting the elderly against infection from the personnel [“Ingen rekommendation om munskydd för att skydda mot smitta från personal“]. Instruct your state epidemiologist to address the press in daily briefings in such a way that they can allow the Swedish mainstream media to report: “According to state epidemiologist Anders Tegnell it is not possible to say whether protecting masks should or should not be used”. (DN, 7 May 2020).

If  a) care home nursing staff are infected without knowing it (because they have not been tested –and they have not been tested because the authorities have refused that testing) and b) because they do not wear masks  they infect many of the elderly they come into direct contact with, and c) because the elderly are fragile, and after they develop  COVID-19 symptoms  are NOT taken to hospitals, but d) ultimately die without proper care or dignity in the throes of suffocation hastened by opiates that worsen their respiratory problems, etc. (Swedish TV4 interview with Professor of Geriatric Medicine Yngve Gustafson, 11 May 2020), don’t mind that so much. Just make the people of your country believe that it’s Okay if the elderly die now, because they will die anyway.

Instruct your state epidemiologist to say that neither the daily number of fatalities nor the eventual overall death toll is the greatest concern in this epidemic. And that forecasting the number of deaths is not the most important part. And if a journalist asks him what the government’s most important concern is, don’t let your state epidemiologist reply that it is the economy. You should get him to say that “health care resources cannot be overwhelmed” And to show that your country’s health care resources are not overwhelmed, drastically cancel the number of your ‘normal’ or planned operations. Follow Sweden’s example by cutting your number of operations by 5,000 a week.

Ensure you have capacity in your Intensive Care Units (ICU) –  and create the impression you have a high – or even the highest – survival rate in your country’s hospitals by simply denying  ICU beds to the elderly and vulnerable, even when they are available.  Let elderly patients die elsewhere, with no chance of them having access to a ventilator. But do all of this while simultaneously plugging the hype that your country is a “Humanitarian superpower”. And don’t mention that time when a minister in your former Social Democrat government claimed your country had a ‘meat mountain’ problem because those born in the 60’s would be forced to feed those born in the 40’s.

So, in order not to waste intensive care resources on older people, issue instructions to categorize them in “biological age” cohorts.  Place as your lowest priority those people of biological age over 80, or those over 70 with one underlying organ system disease. Or even those of biological age over 60 with two underlying organ system diseases. While systematically  denying ventilators to the elderly whose prognosis is assumed to be poor (no one can be totally sure if they would not have been saved if given the chance), you can opt to send them home or elsewhere ­without necessarily testing them for COVID-19.  This way, when they die they will not be counted in your State Epidemiologist’s Public Health Agency system.

All of this will mean you can boast about recoveries, as we do in Sweden,  having in our most prestigious hospital –the Karolinska Hospital– such a high rate of ICU recoveries (“80 percent”), we are now entitled to say that, with such “positive figures”, we have “broken the international trend“ no less. Clearly, follow the example of Karolinska Hospital’s ICU, where a such a system of priorities was put into place even though beds were (and still are) not being used.

Do not investigate or mention in your state-sponsored media (as nearly all of Sweden’s is) the multiple exposures by professors, doctors, and nurses of cases where sick older patients with Covid-19 symptoms have been denied a hospital bed.

The same goes if your top officials are asked about reports of dying elderly patients being denied oxygen in public nursing homes (given instead morphine which worsens their respiratory problem).  Such cases were recently witnessed by Latifa Löfvenberg, a registered nurse in Gävle, who has described the patients’ death by suffocation as “horrific”.

Just reply that giving oxygen is not an issue for the central state health authorities, but “up to each municipal/regional authorities”. 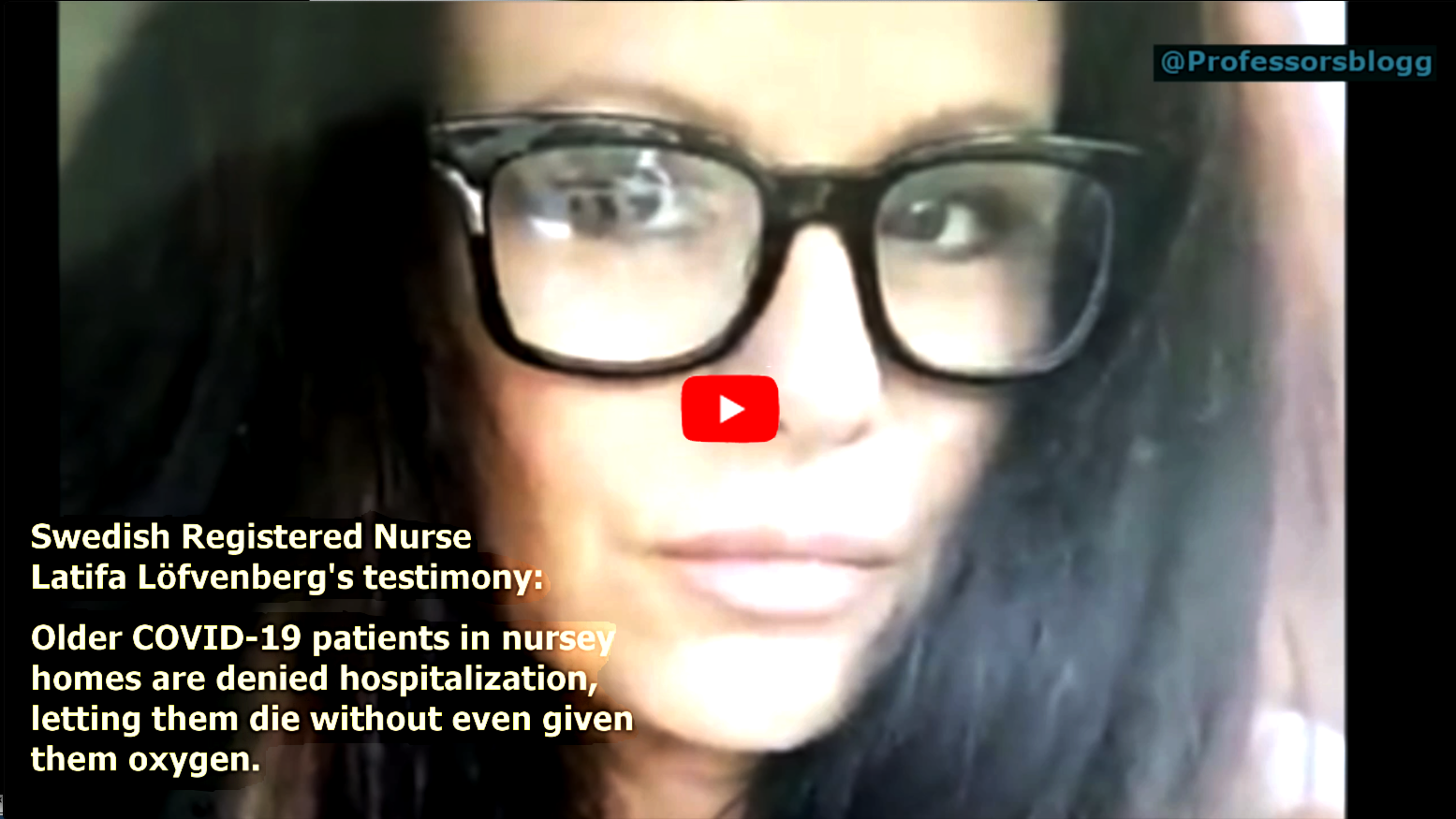 And, of course, the economy: Instead of providing sufficient protective gear to healthcare personnel, and buying masks for the people, etc., be sure that the FIRST thing you do is to give to the profit-oriented private companies and corporate business in your country the equivalent of 724 BILLIONS Swedish kronor (521.186.400,00 US $, or 67.953.814.640,00 Euro).  After all, these are the funds the elderly – those to whom you are now administering euthanasia-like solutions   –contributed to for most of their lives through their noble, dedicated and   patriotic work. 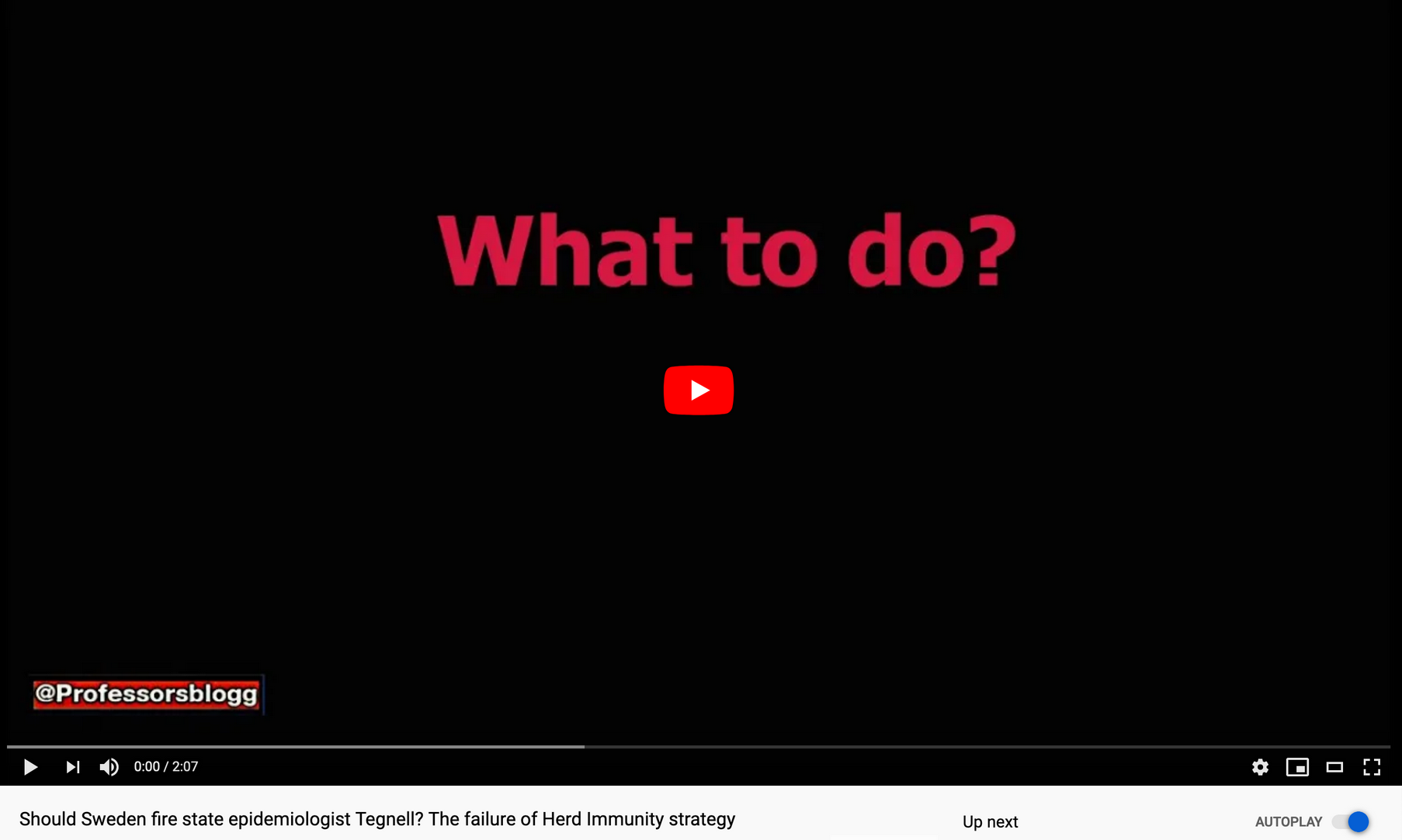 And this is what WHO really said about the Herd Immunity strategy embraced by Sweden: 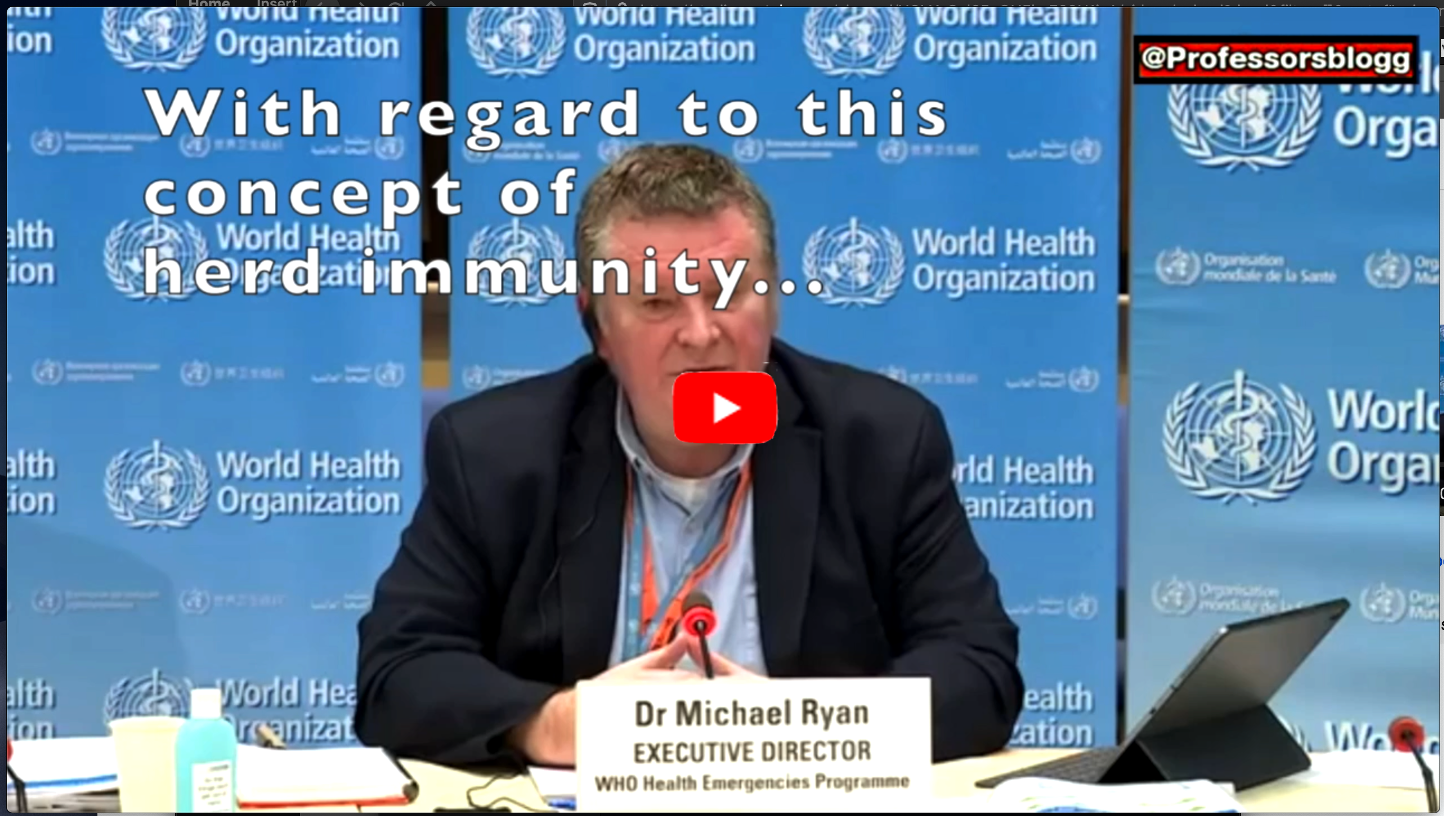