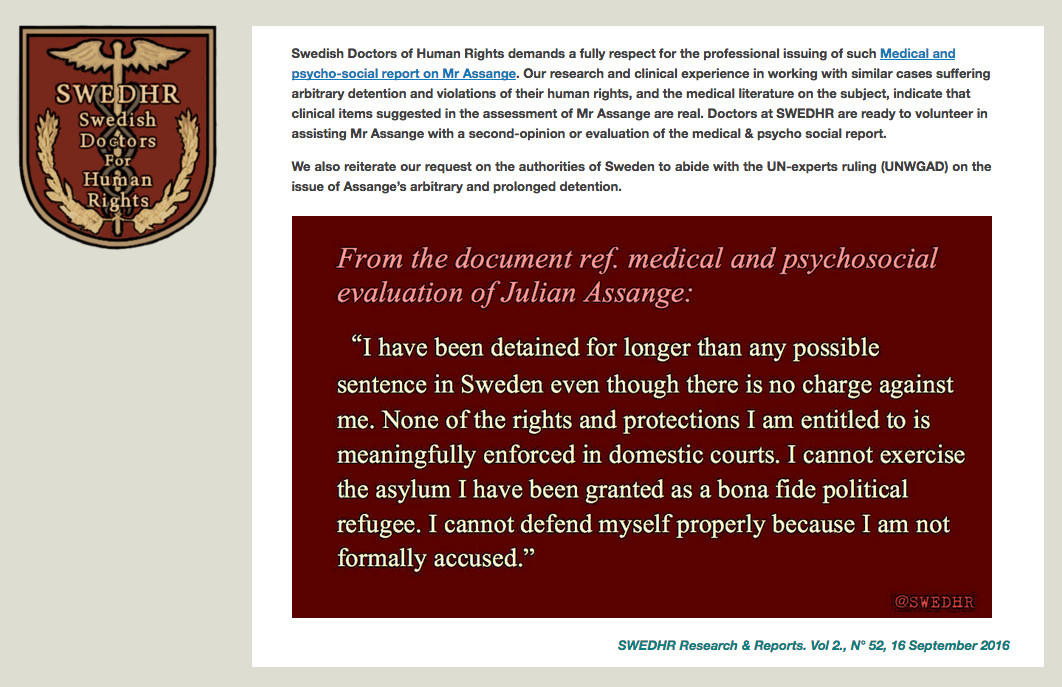 The case pursued by the Swedish prosecution authority against the founder of WikiLeaks has been declared illegitimate by the United Nations expert-panel on arbitrary detention. The ruling established that Mr Julian Assange should be set free immediately, and compensation paid to him by the Swedish state.

However, on “technical grounds”, the Swedish court has now upheld the arresting warrant against Assange, who continues arrested on illegitimate grounds for nearly six years now. This is done amid the confrontational debate between WikiLeaks and the presidential candidacy of Ms Hillary Clinton, arising from the recent DNCLeaks publication by WikiLeaks. US and Swedish political interests align in support of detaining Assange to serve those interests.

We have recently partly reviewed the behaviour from the part of the prosecutor in the case in trying to influence the court decisions [see table 3 above], where spectacular decisions have been taken to give the impression that a “normal” procedure of the case, interrogations schedule, etc., is normally on-going. But above all, the ‘case Assange’ is pursued in Sweden against the backdrop of an intense campaign done by NATO to obtain the formal acknowledgment of Sweden allegiance to their anti-Russia alliance, with the risks of war which such project entails.

For the maintenance of this judicial farce in Sweden, NATO has counted with the collaboration of the monopoly controlling the news in Sweden, namely the state-owned Swedish TV and radio monopoly, and those two owning all the most prominent papers and private channels. Here below their most recent deeds.

The Swedish TV aired just days ago prior the court ruling a ‘investigative program’ packed with omissions and inexact information, all highly detrimental to the truth in the case of Sweden VS Julian Assange. In separate declarations of the program producer reproduced in the Swedish Radio, Mr Julian Assange was anew attacked ad hominem, declared a “paranoid”, etc. Whereas in the program itself the Swedish public was never told of the real harassment and spying against Assange at the embassy, even the recent physical intrusion in the embassy building. Neither it was mentioned in the ‘investigative program’ the important and internationally known UN-ruling (UNWGAD) against Sweden and its request of immediately release of Julian Assange.

Some days ago Wikileaks released records ref. the health-status of Julian Assange. This was mainly intended as a challenge amid the debate of the undisclosed medical records of Hillary Clinton and Donald Trump. As to the inclusion of the health-status issue of Mr Julian Assange in the appeal of the case, that was know long time ago; it was already on the news at the time of the UNWGAD ruling in the spring this year.

In spite that WikiLeaks clearly stated in social media that the release of the document with the medical records was intended “as a challenge to Trump and Clinton to do the same”, the Swedish media omitted this and gave instead an incomplete, i.e. fully biased version.

In fact, one day before the court ruling on Assange freedom, the Swedish media (Dagens Nyheter and eleven other newspapers) accused WikiLeaks of releasing the above-mentioned document solely as a ‘pressure’ of Assange towards the Swedish ruling, without mentioning its truly context at all. Further, the information published by the Swedish press omitted the most relevant and demonstrative clinical features described in the report, and which are directly related to the prolonged arrest, and mentioned instead a few physical “complaints” to be considered not relevant. In nowhere the dispatch in the Swedish media stated that necessary medical assistance has been denied to Julian Assange by the UK authorities.

Swedish Doctors of Human Rights demands a fully respect for the professional issuing of such Medical and psycho-social report on Mr Assange. Our research and clinical experience in working with similar cases suffering arbitrary detention and violations of their human rights, and the medical literature on the subject, indicate that clinical items suggested in the assessment of Mr Assange are real. Doctors at SWEDHR are ready to volunteer in assisting Mr Assange with a second-opinion or evaluation of the medical & psycho social report.

We also reiterate our request on the authorities of Sweden to abide with the UN-experts ruling (UNWGAD) on the issue of Assange’s arbitrary and prolonged detention.