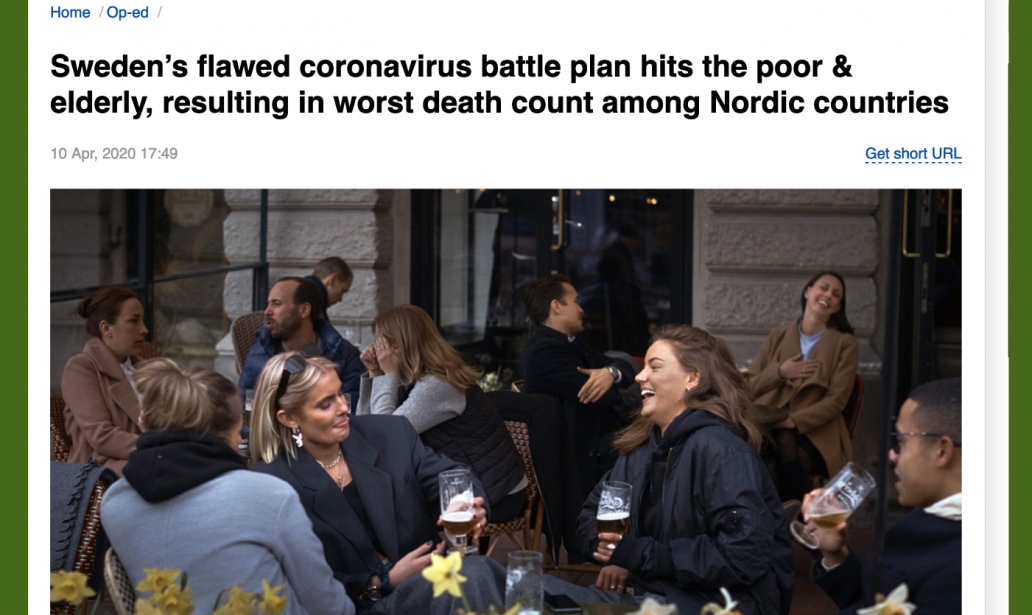 In only three days, the total fatalities in Sweden caused by the current epidemic rose from 477 to 803. Although the problem started roughly about the same time in all the Scandinavian countries, Sweden shows not only the highest rate of fatalities per capita, but also the total death toll results higher than those of all the other Nordic countries together. As of April 9, Sweden shows 78 COVID-19 fatalities per 1 M population, while Finland 8, Norway 29, and Denmark 41. (The US has 47, and Russia 0.5 COVID-19 fatalities per 1 M respectively).

The elderly and the poor

The authorities have been repeating for weeks, that a paramount aim in their strategy is to protect the elderly.  But 40 percent of all the victims were infected in homes housing them. And while no testing was provided to the personnel taking care of those elderly, the virus has reached one third of Stockholm nursing homes. The vast majority of COVID-19 deaths in Sweden corresponds to people of age over 70.

Furthermore, those areas in the Stockholm region habited mainly by immigrants with lower socioeconomic status are overrepresented among the infected by the virus. Worst it is in Rinkeby-Kista (the suburb referred by Trump in his renowned speech ”Look what happened last night in Sweden”), which exhibits the highest rate per capita (48 per 10.000). In social-privileged areas, e.g. Kungsholmen, it is only 9 cases per 10.000. On 16 March, an independent organization of Somali physicians revealed that at least 6 out of 15 fatalities then occurred in Stockholm were of Somali origin.

Further measures detrimental to the elderly’s odds, partly consist in new instructions to doctors as to how prioritize the selection of patients to be treated in intensive care units. Clearly, patients of a biological age 8o or over, should be not prioritized. The same regarding people 70-80 years old having a significant disease in more than one organ system. Neither people of age 60-70 which have similar failure in more than two organ systems are eligible for intensive care.

The above rules are to be applied in situations where the critical beds are not enough. But even if the authorities have now made efforts to increase its availability, Sweden was, according to EU statistics, the country in Europe with the lowest number of curative care beds in hospitals. Local mainstream media informs that during the 90’s  Sweden dismantled most part of the field hospitals kept stored in case of mayor catastrophes. Other measures affecting the elderly is that all planned operations (e.g. cancer, etc.) have been cancelled. The number of operations decreased in five thousand during the previous week alone.

Empirically, Swedes are not abiding with their authorities’ recommendations

As declared by the government and public-health authorities, key component in the Swedish strategy would be some national idiosyncratic factor making Swedes abiding to the authorities’ leadership. I.e., ‘authorities only need to recommend, people follow’. Sweden’s foreign minister Ann Linde explained on 30 March that Swedes have “a lot of trust” in each other and in the authorities and politicians, and that the public follows the decisions and take personal responsibility. She repeated on 9 April: “We trust that people take responsibility.”

Let aside Swedish author Elisabeth Åsbrink’s explanation that the often echoed “trust” could instead be “naivety, or passivity, or laziness, or even a despise for the elderly”, what Minister Linde said is empirically questionable in the context of this epidemic.

Newspaper DN published 9 April  the results of a survey done among the Swedish people witch focused in the attitude of the public regarding “social distancing” –a cornerstone in the authorities’ recommendations. The survey results show that –paradoxically– despite the authorities’ increasing calls for “social distancing” have successively sharpened, less and less of the people interviewed across the days of the survey, say to favour abiding with the recommendation.

The study then names the age-groups which “to greater extent break against the recommendations of the Public Health Agency”. It also concludes that such “national behaviour (riksbeteende) indicates that–with great probability– the infection shall increase in the coming days”.

To assess the injury-epidemiological consequences of the Swedish strategy is also difficult due to unreliable statistics. On the one hand, the reported “infected cases” is solely based on tested cases, chiefly done only at the hospitals; real number of the Swedish cases go unknown. On the other, the death toll reported in daily basis does not represent the real number of fatalities of that day, as the Public Health Agency alleges they receive scores of death reports days after deaths occurred.

In addition, according to a Swedish associate professor in anaesthesiology and intensive care, Dr  Mats Eriksson, a) “Numerous patients released from the hospitals, then die at home, untested, and get the diagnosis unspecific pneumonia”, and b) “There is an instruction in Stockholm, that suspicious deaths caused by COVID19 shall not further tested and therefore not included in the statistics. Yet, they should be put in a death-bag marked “Infected”.”

The Swedish experiment is flawed. Either is not that emphatically true that Swedes are so voluntarily authority-abiding. Either the recommendations from the authorities the public follows are considerably insufficient –beside of non-coercive. The drastic increasing death toll in comparison to neighbouring countries is eloquent.