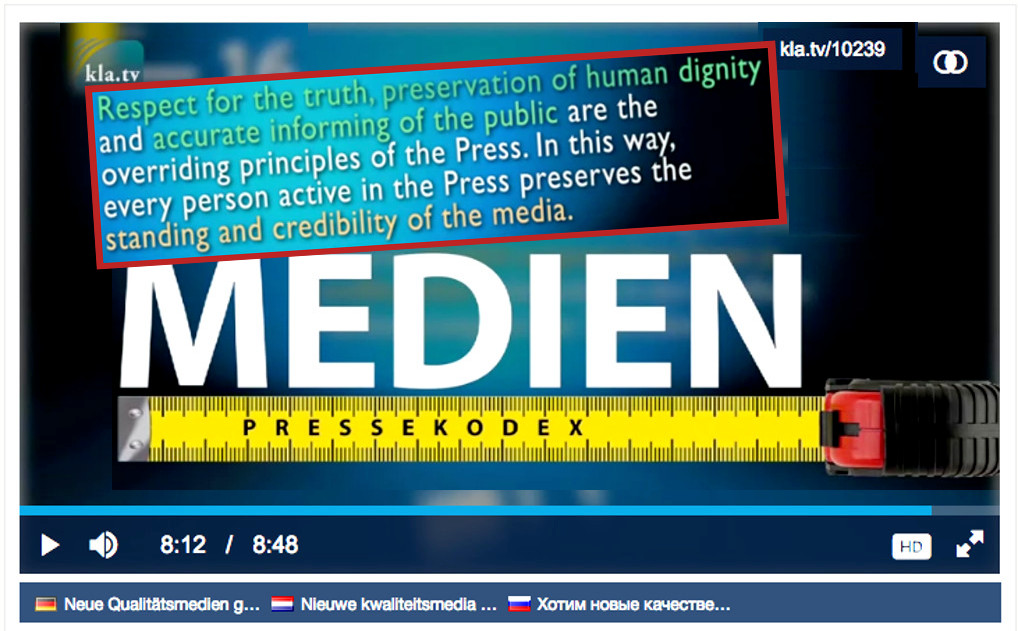 “Der Spiegel” (spiegel.ge) article “Russia’s perfidious campaign against the truth” contains falsified accounts about our organization Swedish Professors and Doctors for Human Rights (SWEDHR). In this statement we demonstrate that the attack –in the main a reproduction of diverse libel spread in some stream media and social media amidst the debate on the White Helmets– represents: 1) disinformation about the true existence of SWEDHR in Sweden, and its absolute independence from governments or corporate interests; 2) a distortion of the positions of our organization on the Syria conflict, the chemical attacks allegations, and the White Helmets; c) in our opinion, a violation of the Press Ethical Code.

May we start by making the observation that, once again, Western media criticism to SWEDHR investigations do not touch at all the issue of the content of our investigate work, its methods and conclusions, and which have remained unchallenged.

The true existence of SWEDHR in Sweden

Der Spiegel states that SWEDHR is a “newly created organization”, which “have never made its appearance in Sweden, but have only become internationally known since they were quoted by the Russian Foreign Ministry and then by RT, Sputnik, Pravda and dozens of other Kremlin-controlled media.”

The facts: SWEDHR was created in September 2014. The first information in Russian media about SWEDHR is from April 2017.

Der Spiegel’s statement, that “However, they (the doctors) have never made its appearance in Sweden” (before April 2017, in the article’s context) is double false:

2. As organization, statements by SWEDHR and/or positions authored by professors and doctors signed as “members of SWEDHR Board of Directors” have been published/mentioned before April 2017 in the leading Swedish newspaper Dagens Nyheter (DN), in the newspaper Västerbotten Kuriren, as well as in the journal of the Swedish Medical Association (Läkartidnngen) and in Dagens Medicine. A special report about our organization has been also published in the Swedish magazine FIB.

Der Spiegel disinformation about SWEDHR is only echoing falsities repeated in a few other pro NATO outlets, all of them having one and only source: one article in DN and its equivalent in Le Figaro. Previously in April this year, Le Figaro and DN voiced a similar argument of a “little known” SWEDHR. Le Figaro’s article was based on declarations by a Swedish TV correspondent in Russia, who has been ousted on allegations of unreliable reporting. The DN article was prepared by a journalist often covering Russian political events in the context of DN long standing Russophobic campaign. SWEDHR’s rebuttal to Le Figaro is found in “Libellous attack by mainstream journalists angered by SWEDHR denounce of unethical war propaganda”. Our answer to the DN claims is found in “The Fake News attack by Dagens Nyheter on Swedish Professors and Doctors for Human Rights”.

Most interesting, another Swedish publication, the libertarian-conservative Fria Tider, independently rebutted DN’s deceptive article about SWEDHR. But Der Spiegel, or the Wikipedia editors of the inaccurate article on SWEDHR, have obviously not cared to quote it. (See the translated transcript down below).

The above statement from Der Spiegel is completely false. Der Spiegel appears to rely in an inaccurate version published by Veterans Today, and which SWEDHR has firmly denounced as spurious (see “Statement by Swedish Professors & Doctors for Human Rights on misrepresentations referred in Veterans Today article on White Helmets”). The statement denouncing the falsehood now repeated by Der Spiegel is prominent linked in our official site –and recently republished by our official account on Twitter. Why would a prestigious outlet as Der Spiegel be interested in propagating this libel? Why would Der Spiegel be interested in further spread a false statement attributed to us which they know is false?

“Swedish Doctors for Human Rights has never accused the White Helmets of “murdering children”.  Neither we have accused of such atrocity the personnel showed in the video published by White Helmets. We took special care of formulating our conclusion as to exclude any accusation of intentional killing.”

If Der Spiegel would be really interested in telling the truth about SWEDHR’s main concern on the White Helmets, it should refer to what we have declared ourselves in the issue, most recently at the Geneva Press Club conference, namely, “Should UN consider White Helmets a politically neutral organization, and its allegations as credible sources by UN investigative panels on Syria?” It shouldn’t, as facts we have exposed demonstrate.

The Fria Tider article was based on its own investigation, on which SWEDHR have not participated in any form whatsoever (we were not even contacted by the authors of that report). However the incorrect heading of the Fria Tider article, its content reveals a contrasting reality to the deceptive picture of SWEDHR portrayed by the above-cited DN article. Here below follows excerpts transcription (translation by Dr Lena Oske).

“Dagens Nyheter tries to undermine the credibility of the doctor’s group – while using the group’s founder as a source.

According to information that DN has received, the Swedish doctors group SWEDHR meant that the suspected gas attack against the village of Khan Sheikhun in northwestern Syria on April 4, where about 80 people should have been killed, was probably a work of opposition groups and not Syria’s regime. Which led Dagens Nyheter –that stubbornly reports the opposite– to strike back.

On Saturday morning, DN.se carried on top a big picture from a Russia Today interview with the founder of the doctors group, the Chilean born Harvard researcher Marcello Ferrada de Noli. It had the headline, “Successful tactics to fight war crimes“.

DN tries to undermine the credibility of the doctor’s group by calling it “unknown“, and highlighting that it has been interviewed repeatedly in Russian RT, which DN calls a “propaganda channel“.

In one article, DN writes, “Although SWEDHR is so unknown in Sweden, its representatives have been interviewed repeatedly in Russian media, and in the Russian Government’s international propaganda channels RT and Sputnik“. In another article, DN writes that some sites “spins on the information of Swedish doctors for human rights and claims that “The White Helmets Murdered The Children In Khan Sheikhoun “(VeteransDay.com Site)“.

However, Swedish doctors for human rights have rejected the article on Veteranstoday.com as fake, and pointed out that they never accused the White Helmets of killing children. On the other hand, the group has claimed that the White Helmets used children with propaganda aims.

…the founder of the doctors (SWEDHR), Marcello Ferrada de Noli, is not ‘very unknown’. He is a medical doctor in psychiatry at Karolinska Institutet and Swedish Professor Emeritus in Public Health. He studied at Karolinska Institutet and for some time was a researcher at Harvard Medical School, where he published several scientific discoveries about the connection between suicide, ethnicity and mental trauma.

In an article from 2006, Dagens Nyheter repeatedly referred to Marcello Ferrada de Noli.

“Marcello Ferrada-Noli is a medical doctor in psychiatry and professor of public health science. He has no doubt about the harmfulness of being exposed to prolonged stress,” wrote DN’s Hanne Kjöller about him.

In a more recent article in Dagens Nyheter, from 2008, Ferrada de Noli is presented as some brave hero, who managed to get from Chile to Sweden as a political refugee, and educated himself as a professor.

The Swedish Doctors for Human Rights board includes several other doctors, such as the former KI professor Anders Romelsjö. There are six doctors in the Board.”

On SWEDHR Independence, and our right to give interviews to any outlet, even outside NATO, and regardless of the journalist’s or oulet’s nationality

Swedish Doctors for Human Rights is an absolute independent organization. We do not receive, neither ask for, financing, sponsorship, counseling, association, etc. from/with any government, institution or corporation.

Swedish Doctors for Human Rights is not a xenophobic organization. As we have already declared in our statement in the Journal of the Swedish Medical Association (Läkartidningen), we  regard objections to our right of granting interviews in Russian, Italian, UK , Chilean, Danish, etc. media as infringing the freedom of expression principle.

We have previously also explained to another German outlet (ARD/BR that Russian media has contacted us after they have learned about our investigations in the publications done in The Indicter Magazine. And with regard whether Russian Federation representatives or media would estimate our investigations as contributing to the cause of truth amid the jungle of disinformation fabricated or spread by western stream media around geopolitical events –such is the case of the Syrian conflict–  that is totally independent of SWEDHR. Furthermore, we thank the Russian media, and also to some honest media elsewhere, for the fair and accurate coverage they have done of our investigations.

What are violations of the Press Ethical Code?