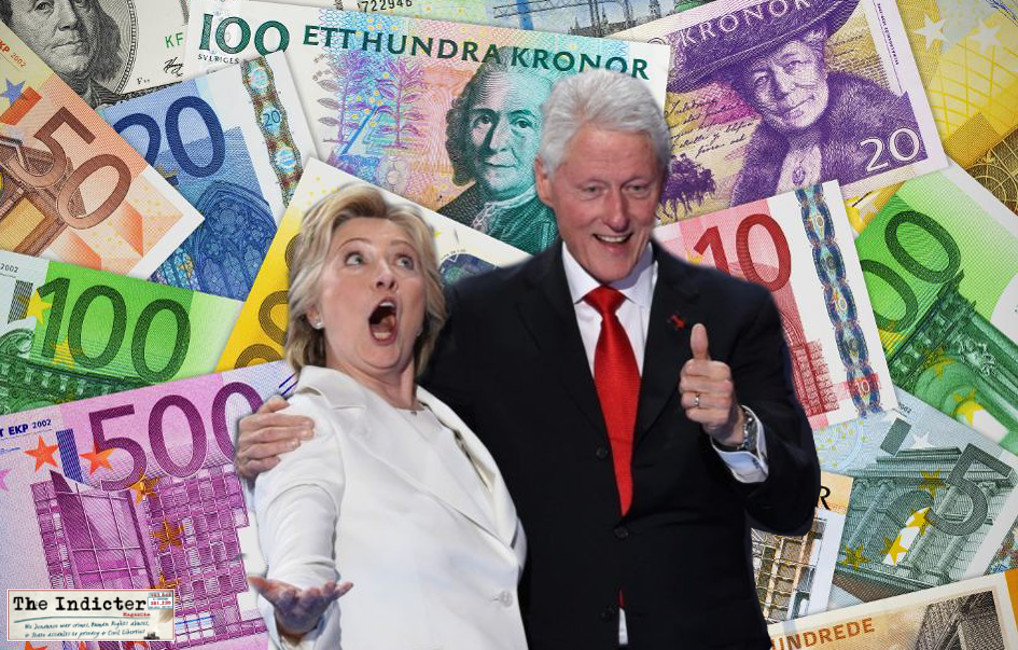 Editor’s Note: Explaining Mr. Charles K. Ortel investigative work, the Wall Street On Parade commented in “A Harvard MBA Guy Is Out to Bring Down the Clintons“ (April 2016)   that he called the Clintons’ charity the “largest unprosecuted charity fraud ever attempted.”  After a prolific research contact with Mr Ortel –who was introduced to us by author and publisher Gilbert Mercier– The Indicter Magazine obtained both inspiration and a valuable feedback that would later crystallize in our investigations on the involvement of Sweden with the Clinton Foundation. See for instance, “Sweden’s business with Clinton Foundation in a geopolitical context“, and “Swedish company Tetrapak linked to Clinton Foundation Haiti Operations. More on Ericsson“. We see the original material by author Charles K. Ortel here below, as a serious call to Swedish authorities and investigative journalists to further examine these facts, which may be compromising Sweden’s international posture. We have also added a recent published video with a talk on this subject with the author and Associate Professor Bilyana Malinoswski ./ Prof M. Ferrada de Noli, The Indicter Magazine.

Sweden’s involvement in the Clinton Foundation should be investigated

Since February 2015, when I concentrated upon charities and their potential for use in fraud, personal enrichment, and money-laundering, I have discovered that the Clinton “charities” stand at the core of a corrupt network of donors, politicians, and others who promote unregulated “globalist” projects that sound appealing but certainly do more harm than good.
Even now, there is no government regulator empowered enough to track down the true impact of charities operating in multiple nations, while soliciting funds.
Unlike profit-seeking corporations and funds, where regulators can be cynical enough to examine true, underlying motives and results, charities are presumed by most to operate above reproach, pursuing only pristine motives, including betterment of living conditions for the majority of humans that is still disadvantaged, from economic perspective.
Charities operated in the names of political and other celebrities are even less likely to acquire close scrutiny by taxing authorities, and government regulators.
But the sad truth is that international charities are “perfect” vehicles for influence peddling, and for financial mischief, especially when they are overseen by conflicted directors/trustees, and “audited” by under-resourced professional firms.
Particularly since 1988, when global markets became more reality than concept, international charities involving dynastic political families such as the Clintons, have become operations where donors can trade tax-deductible contributions for favors from the network of politicians and retired politicians who wield influence over grant-making, and multi-lateral entities. These favors can include valuable licenses, no-bid contracts, and subsidized loans, or decisions to stop or slow prosecutions.
The Clintons and Sweden
Sweden, like a number of other nations, relies heavily on export markets to earn profits from factories and production centers that are sized toward global requirements, rather than much smaller local opportunities. So, it has proven useful, over decades, for Sweden to embrace organizations including the United Nations and its affiliates.
Since January 2001

, the Clintons have adeptly cemented ties with many multilateral organizations, and have nurtured relationships with allies inside U.S. bureaucracies. Moreover, many Clinton donors (to political campaigns, and to their “charities”) seem to have profited from a symbiotic relationship with the Clinton family.
One large donor to the Clinton charities has been an entity affiliated with Novamedia, a company that operates “lotteries” in Sweden and in other nations. But when one looks closely into Novamedia and into its lotteries, one discovers that these are actually businesses that enrich vendors, and send only about half of their revenues (possibly less) towards charities. Evidently, Novamedia is not careful enough in that large contributions have been sent by the lotteries towards “charitable” activities ostensibly run by the Clinton Foundation, even though these activities never have been validly authorized by the U.S. federal and state taxing regulators.
Another important donor has been the Swedish government itself, starting around 2003, in support of “fighting HIV/AIDS” internationally. Here it is quite surprising that auditors for the Swedish government have not thought to check closely enough when and whether the Clinton Foundation ever acquired rights to solicit funds for these supposed charitable purposes.
Finally, U.S. law requires that U.S. charities operating internationally be controlled tightly from a base inside the U.S., and that persons in position to exercise influence over the charity (especially including the Clintons in this case) derive no personal benefits from donors or from activities of the charity. Here, in the case of the Clinton Foundation generally and in the case of the branch in Sweden that operated from 2011 to 2017, one wonders why so many Swedish entities donated and also made payments to Clinton family members for “speeches”, or became involved with Clinton-connected business ventures.
Will President Trump Use the Clinton Case to Help “Drain the Swamp”?
Early in January 2018, an African American woman named Corrine Brown who served in the U.S. Congress for years, representing Jacksonville, Florida will report to a Federal prison to begin serving a five year jail sentence for her part in an $800,000 charity fraud.
Former Rep. Brown, a Democrat, was indicted during summer 2016 unlike Hillary Clinton–each lady was in the middle of a political campaign, but Clinton sought a far higher position as U.S. President, while Brown just tried to retain one of 435 seats in the House of Representatives.
The scope and declared financial scale of Clinton “charity” frauds is many times greater than $800,000 for Brown’s operation–why was Brown indicted, even as no action was taken against the Clinton international nonprofit scheme?
As a guess, President Trump’s Department of Justice may soon move against the Clinton network, and such action will surely expose and draw into question support for suspect “charities” by Novamedia, by the Swedish taxpayer, and by other Swedish donors.
Many large companies inside Sweden are linked to charities and many handle potential conflicts appropriately, having done so for decades.
A moment of profound reckoning approaches–it is past time for Swedish journalists to examine records of supposed Clinton charities, inside Sweden and around the world. – Charles K. Ortel.

Click on image above for video, also including a talk with Assoc Prof Bilyana Martinovski: “Sunday with Charles – The Lyin’ Witch and Her Wardrobe“
APPENDIX
(click on the link for the pdf-file)

The Lyin’ Witch and Her Wardrobe

The author is a private investor, writer, and analyst who covers global financial markets and geopolitical developments/trends, with an eye on exposing fraud and corruption. Since 2015, he has been investigating the work of charities, in particular those that seem to be operating illegally to create wealth and extend political power for their trustees, executives, and selected donors.

Starting in 2007, Mr. Ortel was among those who warned of a looming credit and stock market crisis, concentrating and exposing risks posed then by General Electric Company, a multinational enterprise most thought was safe, secure, and promising.

Since then, he has been among the few who warned that traditional attempts to reignite economic growth (governments spending more than they took in), or unusual approaches (Central Banks suppressing benchmark interest rates) would fail, and only complicate underlying problems.

On his personal website, www.charlesortel.com, Mr. Ortel laid out a 10 point plan to restore American prosperity. He is a guest across multiple media platforms including television, radio, podcasts, and print media, and he hosts his own weekly podcast show “Sunday with Charles” working with award-winning film veteran Jason Goodman and Crowdsourcethetruth.org.

From 1994 to 2002, Mr. Ortel was President of The Chart Group, L.P., a private investment and advisory firm, which he founded with another partner. While at Chart, Mr. Ortel helped create and manage an Irish corporate buyout fund, a small-cap U.S. buyout fund, a French petroleum development company, a U.S. natural gas distribution company and an offshore fund of hedge funds. He served as Chairman, President and Director of numerous Chart-sponsored companies and as an outside Director of Tedcastle Holdings Ltd. and Ariel Corporation. From 1991 to 1994, Mr. Ortel was Senior Managing Director and Member of the management committee at The Bridgeford Group, Inc. From 1980 to 1991, Mr. Ortel worked for Dillon, Read & Co. Inc. Trained in corporate finance, Mr. Ortel eventually served in a senior capacity within Dillon Read’s corporate buyout department before leading Dillon Read’s worldwide merger and acquisition group as a Managing Director.

The author on Twitter: @CharlesOrtel
The Indicter Magazine. Copyright © 2020. All Rights reserved.
Made with by WPlook Themes