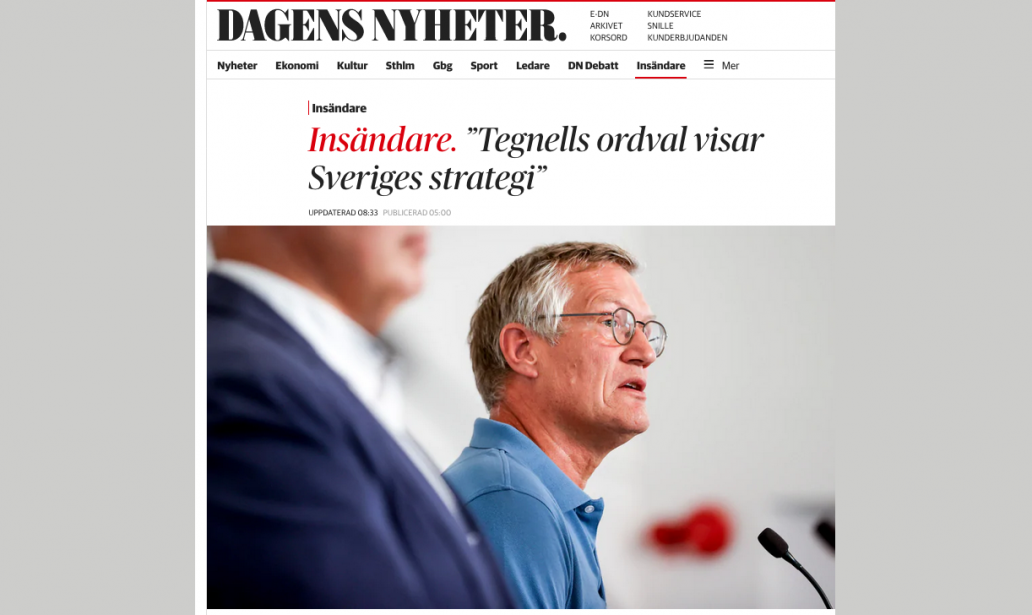 The Indicter Editor’s note: This analysis was published as Letter to the Editor in the Swedish newspaper Dagens Nyheter, 25 August 2020. The article’s original title is ”Tegnells ordval visar Sveriges strategi” . Translated from Swedish by The Indicter, with the author’s permission.

“LETTER TO THE EDITOR. The Swedish Public Health Agency’s choice, unlike Karolinska Institutet (KI), of not recommending protection masks,  contributes to the spread of the coronavirus in the society. State epidemiologist Anders Tegnell’s choice of words shows Sweden’s strategy, writes Rodrigo Ferrada Stoehrel, PhD in media and communication science.

Language, words and symbolic forms are neither objective nor neutral. They are fluid and can be challenged, for example the Swedish flag or concepts such as “democracy” and “monarchy”. Different people read different meanings regarding the same symbols, whose association varies depending on the context.

There are also words that are more difficult to challenge, for example those that are culturally stigmatized such as “Nazism” and “Communism”. Or to use a later and more contemporary example: “herd immunity”.

Flock immunity is, as Anders Tegnell at the Public Health Agency put it, a sensitive concept because the word risks sounding “as if one is willing to accept illness and death to a greater extent” (Expressen 12 Aug 2020). So: there is an unpleasant price that consists of human life as payment for the collective immunity.

In order not to get confused in the rhetoric of whether Sweden’s main strategy (or goal) is herd immunity or not, my suggestion is that we try for a moment to forget the word and instead concentrate on the actions that in one way or another contribute to or prevent that immunity is gradually allowed to enter society.

There is currently a debate about proactive and reactive measures. The proactive ones refer to prevention and the reactive ones to those that are used after the infection has spread.

On the proactive side, we have above all social distancing –another somewhat tricky concept. Roughly: the Public Health Agency’s recommendations to keep distance, to work from home (those who can), distance education for universities and a ban on public gatherings with more than 50 people.

In relation to the reactive, we have heard the argument that it is important to have a well-functioning healthcare with room for the most needy. It then appears (obviously) as if the Swedish Public Health Agency wants to bring about a balance between the proactive and the reactive.

Or as Tegnell says: “The goal is not to remove every occasion of infection” (Aftonbladet  27 Mar). This is because “it is better that you let it [the infection] to slowly trickle through. Then you can keep control and take care of it [the infection] so that it does not have to harm your society more than necessary ”(Tegnell in Aftonbladet, 16 Mar).

The point is clear. The Swedish Public Health Agency believes (and has done so for a long time) that it is only through successive immunity that the infection would eventually be controlled.

It’s about getting a balance; to let immunity – in whatever form this immunity looks like – slowly trickle through. Because if we look beyond all words and instead look at the consequences of this non-use of protection masks (in places where the recommendation on social distancing is difficult to comply with), the consequence is that immunity increases as infection increases (and harvests victims).

Let me take it one step further. Because protection masks has a proven effect against infection, according to Karolinska Institutet, an effect of its application is that immunity is also inhibited when the infection is slowed down.

Tegnell wrote in an e-mail, that a “point that would speak in favor of keeping schools open, is that herd immunity would then be reached more quickly” [”poäng skulle tala för att hålla skolorna öppna för att snabbare nå herd immunity”] (Expressen 12 Aug). Hence, the issue of mouth and respiratory-protection mask is important. That is, not to use them as ways to achieve immunity faster. Consequently, a narrative that is difficult to stand for publicly and defend in TV interviews.

The more than 5,800 Swedes who have died so far in the pursuit of immunity will not return, which at the same time and ultimately is the cost – deaths and grief – for all circulating antibodies that now potentially give a streak of hope. It is no wonder that Tegnell, when he appears in the media, put first his words on a weighing scale (Svenska Dagbladet 11 Jun).”