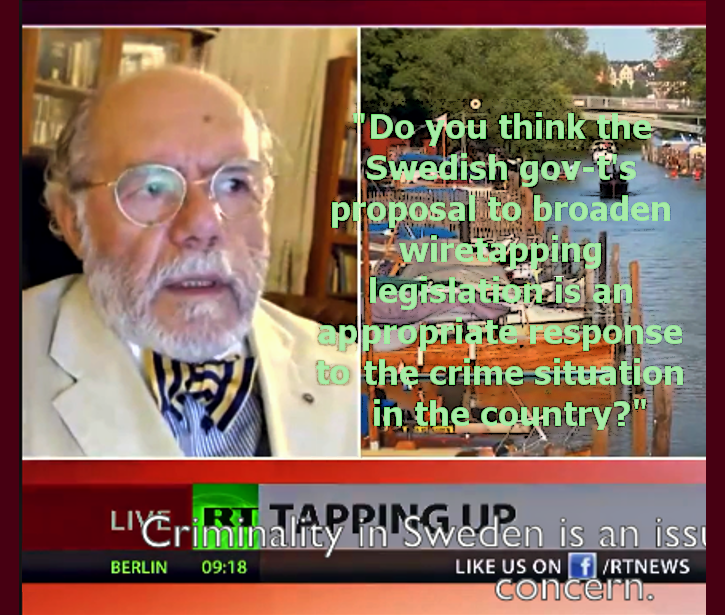 Sweden’s Police vice-commander has put forward a proposition to legislate a new form of wiretapping, in order to combat the rising criminality in the country, which the authorities emphasize it refers primarily to gang criminality, or “clan-criminality” among immigrants. This new wiretapping system is to be used even against individuals which are not suspected of have committed a crime. The government’s Interior Minister has declared being open towards the new proposal.

RT International did an interview with me on the subject above, and a segment of it was aired in the news program of today 8 September. Here below a transcription of the full interview. See the video down below this text.

Criminality in Sweden is an issue of reasonable concern, and it has to be addressed as soon as possible, however not primarily via a menace to the civil liberties of the population, a population which comprises the vast majority of the immigrants in Sweden, that has nothing to do with criminal behaviours.

On and on the government has denied the issue, it has forbidden to present public statistics where ethnicity of the perpetrators of criminal and violent deeds could be revealed. But these are the updated facts: In the first half of this year we have in Sweden about same number of killings in the gang-criminality circuit than we had in the entirely past year, or the year previous.

In my opinion it would be reasonable to wiretap, in accordance to a court authorization, communications on which there are tenable suspicions of criminal, or terrorist activities. I oppose the indiscriminatory surveillance against citizens which are not suspected of any crime. But that surveillance, even is supported by legislation, it will not solve the problem, of course not.

Regarding what else it could be done, we have to distinguish between purely police efforts and decisions to be taken, I mean, responsibilities to be taken, by the Swedish political authorities.

On the first series, there are a variety of items where the police could have help via a better coordination with other actors in the international transport endeavour. Specifically, one measure could be an increase in the border controls of vehicles into Sweden. Currently, or in the period pre-pandemic, these controls did look at times somehow neglected. As I am a frequent traveller by car from Italy to Sweden, and vice-versa, I am a witness on the poor control into the vehicles then implemented at the frontiers.

Another measure to improve is the coordination with police institutions’ efforts not only in neighbouring countries, but with the police authorities of the countries where it is suspected that these criminal individuals have their original and / or ongoing connections.

But the above is not what it would produce a definite improvement, let alone solve the problem.

What it is needed, is a radical change in the mindset of Swedish politicians and the cultural elites in symbiosis with them.

For the problem is not purely of law-enforcing nature, like it will end with a more intensive and extensive police intervention, or adding more and more instruments of surveillance or repression.

The problem is primarily social, and therefore the concern of political decisions.

And here we come back to the original problem, an issue of idiosyncratic nature I would say, which is the apparently detachment of Swedish politicians, including the government, regarding responsibilities that their previous opportunist decisions have brought about in the Swedish society as a whole.

A core issue here is the positions of the authorities towards the acculturation mess they have occasioned in Sweden via their ill-fated decisions on mass-immigration in 2015 and partly onwards.

Undoubtedly, we have that the rising of criminality of these type has been associated with immigration issues, to which integration flaws belong too. I would like to stress, however, that the issue is not immigrants perse ­–which in its vast majority are law abiding, and that if given the opportunity they work as hard and honest as a Swedish-born individual. And, by the way, a vast proportion of “immigrants” are born in Sweden, although they are considered, and named / treated by many, as “second generation immigrants” .

The issue is primarily the integration versus rejection of the immigrant class.

In the recent interview in Swedish Radio, which Sputnik cited, the upcoming head of the Stockholm police force also revealed that the kind of criminality in discussion occurs principally in main-cities’ suburbs considered socially less-favoured areas” (“utsatta områden”).

Well, they surely have the data to support that conclusion. Not any surprise. Sweden is “unlike anywhere in Europe” in a series of issues. Take for instance the Swedish management of the current pandemic…Or historically, Sweden’s main geopolitical stances, from its position towards the 3th Reich during WW2 up to now…leading in Europe the demands on increasing sanctions against Russia.

What was unlike other countries

in Europe, it was not only the massive number of migrants that Sweden took in around the half of last decade. What was most unlike the rest of Europe, and the word, I guess,  was that 80 percent of migrants that the Swedish authorities allowed into the country  did not have identification papers. I mean, you would not know where those migrants really came from, why they came from, who were they, etc. That is not only naivety, that is utter irresponsibility from the part of the Swedish political authorities.

This what happened; Sweden was an staunch supporter of the war for “regime change” and “oil for the West” that the US and other principal NATO countries waged via jihadist-proxies against the legitimate government of Syria. Parallel to the advances of the Syrian government forces, which at a given moment after the support received  by Russian armed forces, advanced in the recapturing of Syrian territory. The US and other NATO allies made the narrative that those who fled during that period of the “war in Syria”, were “victims of the Assad regime”, and needed shelter just precisely in Europe.

The Swedish authorities, a) or simply swallowed the above by means of sheer naivety, or b) they were consciously taken the opportunity to show Sweden was the “humanitarian superpower” defined by Carl Bildt’s rhetoric; or c) they saw a possibility of confronting Russia by “helping Assad’s enemies” (the “Syrian refugees”), without the need of participating more actively in the war.

It should be noticed that Sweden has, at least since 2014, been leader in Europe in agitating an increasing of economic sanctions against Russia, for whatever reason at stake. An anti-Russian stance, or complex, confuse the hearts and therefore blind the minds of politicians, their media and corresponding cultural elites, to the point of harm the interest of its own country.

For whatever reason, those above or else, the fact is that over 160,000 migrants were received as “refugees” in Sweden from 2015. In addition, the fact is that the majority of them did not come from Syria! And the Swedish authorities swallowed all that,  despite the United Nations different conventions referring causal for political asylum, in nowhere estipulate that fleeing from a combat zone” is a causal for political asylum.  Political asylum should be given according to international conventions, only to individuals persecuted for its political ideas, political activities, religious activities, and so on. Economic migrants are definitely not in the list.

Certainly, among the different nationalities in that migration wave, there was a main bulk of Syrian immigrants, added from other countries in the Middle East, which for whatever reason took the opportunity to start a new life, to work hard and be happy. But the fact is that even if Syrians was the more numerous among the different ethnic groups, they were not the majority. Migrants from Africa, Afghanistan, etc., took also their chance. And the Swedish police could not know better, as 84 percent of those migrants of 2015 did not have identity papers, although many of those showed in the media clips and pictures sported cell phones.

Referred to only migration, no, I won’t . One fact is that the qualitative increasing of this type of criminality, the gang criminality, started years before the huge migration wave towards Sweden in 2015. However, it is also a fact that it increased in later years.

Based on that, on that recent-years increase, I would instead blame the Swedish politicians that let in the country that enormous amount of migrants [by 2015] without knowing who they were, from where they came from, etc.  Secondly, as I mentioned,  I blame the politicians for not taking seriously and with civic responsibility the issues of integration, the issues of racism, the issues of negative sentiments from the part of sectors of  the immigrant population that feels and experience sheer marginalization in society, social ostracism, arbitrariness in the labour market, in the common life activities, even among academia, etc.

Ending structural racism in Sweden, at the same time that hardening the combat against criminals, would be a way to get rid of the problem in the long run. The day that immigrates are not “immigrants”, but Swedish citizens honoured as such, with the same rights, to same works and same housing, same education, etc., that day the hard gang-criminals shall have real difficulty to recruit proxies, to sell their drugs, and to steer hate among humans born equally on earth at any side of borders.