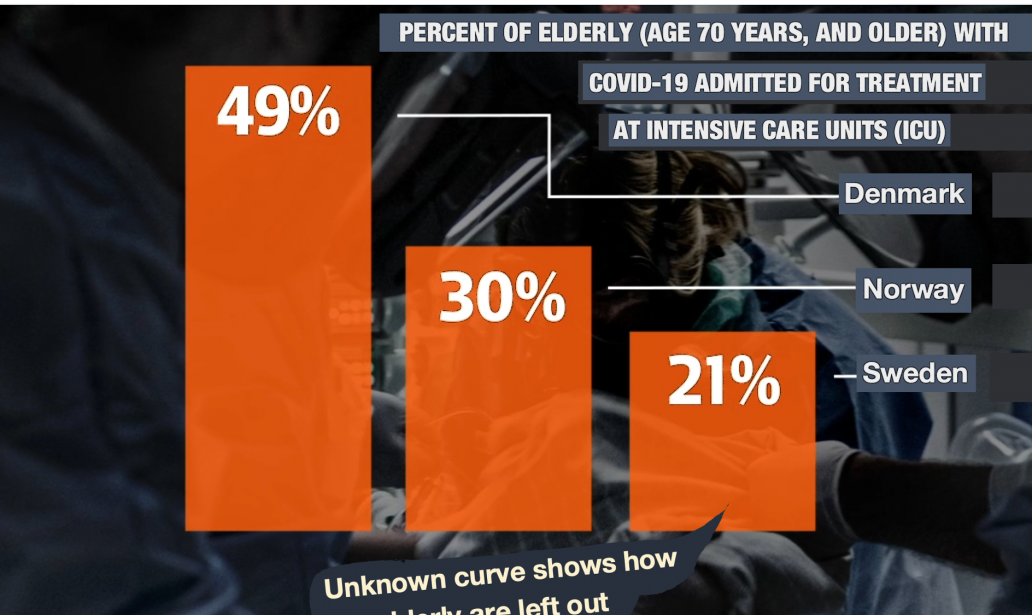 With a coronavirus death rate that is among the world’s worst and shocking stories of neglect emerging from the country’s care homes, Sweden’s political and healthcare leaders have a lot to answer for.

One of the most notable features of the Covid-19 pandemic has been the different ways countries across the world have responded. This has obviously resulted in varying outcomes. Some nations have fared reasonably well. Others less so. And some, such as Sweden, have had a terrible time.

On May 14, it achieved the unenviable record of having the highest number of confirmed daily Covid-19 deaths per capita reported over a seven-day rolling period.

The chief epidemiologist at Sweden’s public health agency Anders Tegnell admitted that such a high death toll is “horrifying” – a dramatic change of tack from earlier in the crisis, when he claimed that the body count was perhaps “not the most important part.”

These results come, remember, from a country that was targeting herd immunity and, according to its ambassador to the US, Karin Ulrika Olofsdotter, believed it could be reached sometime in May in Stockholm.

Besides the dramatic number of fatalities, what is emerging in Sweden is a dreadful catalog of inappropriate healthcare provided for the elderly, with sick and dying people denied resources which should be widely available.

It is worth noting that 90 percent of the total Covid-19 deaths in the country are of people aged 70 and older, and that half of these occurred in nursing homes. There is, for example, one case under investigation by prosecutors of a care home in Stockholm where over a third of the elderly who lived there reportedly died after coronavirus ran amok.

In a piece titled ‘The treatment of Sweden’s old and vulnerable is a ‘catastrophe’’, the Telegraph reports the story of a local Stockholm politician, Bjorn Branngard, who got a call from the nurse in charge of the care home where his mother was. The nurse asked him if it was ok to move his mother to another section. “Why?” inquired Branngard, “Because it’s only her and one other person who is still alive. Everyone else is dead,” she said. Eventually, his mother died too, just a few days later, said the report.

To their credit, some health workers have been prepared to speak out on the shocking treatment given to the elderly. As I reported in the Indicter, registered Nurse Latifa Lofvenberg witnessed the demise of many patients living in care homes, and told of how they were denied oxygen to aid their respiratory problems, resulting in “horrible” deaths. Her bravery in exposing this led to her being fired from her job after her comments were posted on YouTube.

Confirmation of this macabre practice was given by a respected professor of geriatric medicine, Yngve Gustafson, in an interview on TV Channel 4. He admitted, “What most often is done with the elderly at nursery homes, after deciding not to take them to the hospital, is that they prescribe palliatives usually including both morphine and midazolam. This means that one quickly suffocates the patients, because both drugs deteriorate breathing.”

But it’s not only in care homes that discriminatory healthcare behavior against the elderly been observed. It has also taken place in hospitals, according to a growing number of reports filed with the Swedish Health and Social Care Inspectorate (IVO).

These complaints surround patients denied treatment at intensive care units (ICU) at hospitals in the Stockholm Region, despite places being available (as they still are). IVO has described the reports – which also concern the Karolinska University Hospital – as “serious.”

One complaint filed with IVO was also published in the newspaper Expressen. It read: “We are concerned about the process of selection for respiratory care among patients with severe Covid-19 infection in the Stockholm region. We have repeatedly found that those patients who are deemed to be in need of respiratory care for a long time (e.g. a couple of weeks) are denied intensive care with the argument that a younger patient with better prognosis may need the place in a few days.”

According to Dr Elda Sparrelid, Stockholm Region chief physician, there is no patient data linked to the cases claimed by the filing doctors. “Therefore, it cannot be investigated whether someone received the wrong care or not,” she added.

The situation emerged after the National Board of Health and Welfare issued instructions – described in an earlier article – to handle priorities in case the ICUs reached “disaster” mode, where resources would be depleted and no longer available to all.

But Swedish hospitals have not been in that critical situation, and ICU beds have remained available. ICU head at Karolinska Hospital, Dr Bjorn Persson, admitted on May 5 that only “around 115 of the 140 available intensive care beds are currently occupied.” Nevertheless, while Chief Doctor Persson denied that patients “who had still had a chance of survival were not treated,” medical staff members gave a different account, and IVO chief lawyer Linda Almqvist admitted it initiated an investigation.

Another problem has been that scores of elderly Swedes with Covid-19 have had to wait to receive health care at hospitals, or simply told to stay at home for an inappropriate length of time. Some have even died without ever getting the opportunity to see a doctor.

Further evidence of the neglect of the elderly in Sweden is the apparent determination of the local authorities to manipulate, or even cover up, the extent of the scandal. An exposure by a regional newspaper, Ekuriren, laid this bare: In eight out of nine municipalities in Sormland (south of Stockholm), it alleged that authorities “deliberately withheld the information in order to prevent media scrutiny and public transparency” regarding the number of elderly Covid-19 infected in care homes.

In summary, the management of the pandemic by the Swedish public health authorities is not only an affront to scientific epidemiology, but also compromises the medical ethics and human rights of a country that considers itself a “humanitarian superpower.” It’s just as well other countries have not followed suit.