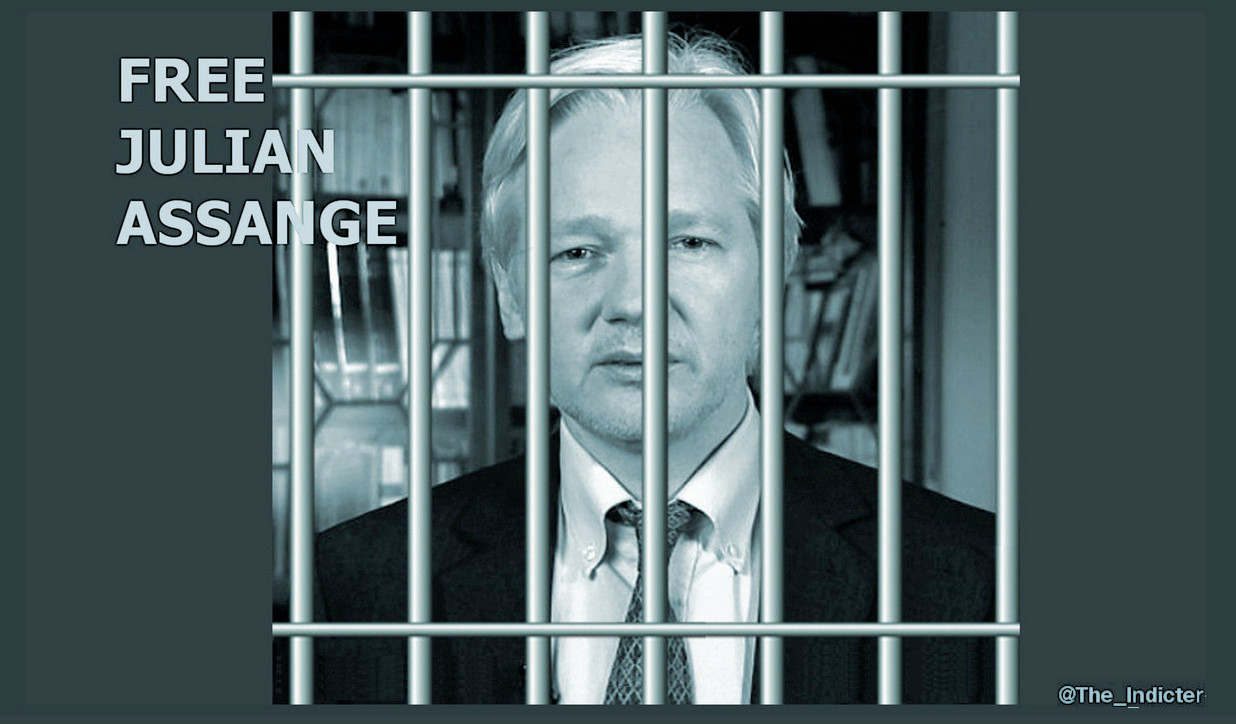 By Nozomi Hayase,
Member of The Indicter editorial board.

Through the silencing of Assange, the heart of democracy suffocates.

On Thursday, the Department of Justice made an unprecedented move to file 17 Espionage Act charges against WikiLeaks founder Julian Assange. This indictment was what Assange and his legal team have been warning about since 2010 and the risk of extradition was the sole reason why Assange sought and was granted political asylum by Ecuador in 2012.

Free press defenders condemned this aggressive prosecution of Assange by the Trump administration as “the most significant and terrifying threat to the First Amendment in the 21st century”. This attack on free press as a pillar of democracy was predicted long ago by a leading figure in America’s early development. Thomas Jefferson feared that there would come a time when the American system of government would degenerate into a form of “elective despotism.”

In the face of Western governments’ coordinated efforts to criminalize journalism and imprison this award-winning journalist, democracy becomes defenseless.

Assange echoed this warning from one of America’s founding fathers in his message to his supporters: “I told you so,” which he delivered through his lawyer after he was arrested at the Ecuadorian Embassy. He was not only aware of this unaccounted power inside this nation, but also through his work with WikiLeaks, he shed light on its shadowy activities, and provided ordinary people means to counter this force that has now become tyrannical.

WikiLeaks by publishing truthful information about the US government, revealing its war crimes, corruption and human rights abuses, came head to head with the Pentagon and the US State Department. Long before Edward Snowden’s NSA revelations, Assange alerted public about mass surveillance, informing people how the Internet “has been transformed into the most dangerous facilitator of totalitarianism.”

In March 2017, with its Vault 7 publication that detailed the CIA hacking tools that enabled the agency’s excessive power, the whistleblowing site challenged the national security state. Right after this largest leak in CIA history, the US government’s assaults on the free press intensified. In April, the then-Attorney General Jeff Sessions stated that the arrest of Assange is a priority, threatening to prosecute media outlets publishing classified information. Trump’s Secretary of State and the former CIA director, Mike Pompeo called WikiLeaks “a non-state hostile intelligence service,” claiming that the organization tries to subvert American values and that it needs to be shut down.

Now, with the Trump administration exercising extraterritorial jurisdiction to bring charges carrying 175 years in prison against a journalist who is not a US citizen, and who has published material from outside of the US, we are seeing the reality of American despotism.

Back then Jefferson warned citizens:

“The time to guard against corruption and tyranny, is before they shall have gotten hold of us. It is better to keep the wolf out of the fold, than to trust to drawing his teeth and talons after he shall have entered.”

That time, is now here. WikiLeaks publication of the Global Intelligence Files that exposed the inner workings of geopolitical intelligence platform company Stratfor, contained email discussions on Assange’s arrest. An email from December 2010 said, “Pile on. Move him from country to country to face various charges for the next 25 years. But, seize everything he and his family own, to include every person linked to Wiki.”

After illegally terminating political asylum of the WikiLeaks founder and having the UK police drag him out of the embassy, Ecuador confiscated Assange’s belongings, including legal papers and medical records from his time living in the embassy. On May 20, just days before the US government brought espionage charges against him, Ecuadorian officials handed over Assange’s entire legal defense to the US authorities.

From a high security prison where he is being held in solitary confinement, Assange sent out an urgent message. In a handwritten letter addressed to British independent journalist Gordon Dimmack, he described the difficult conditions he has been placed in:

“A superpower that has been preparing for 9 years, with hundreds of people and untold millions spent on the case. I am defenseless and am counting on you and others of good character to save my life.”

Assange continued, “I am unbroken, albeit literally surrounded by murderers, but, the days where I could read and speak and organize to defend myself, my ideals, and my people are over until I am free! Everyone else must take my place.”

If Trump’s America succeeds in extraditing this foreign journalist to the US, there will be a very dark time ahead. This would not only be the end of journalism, but would lead to a destruction of the very foundation of our civilization—a premise of society governed by the rule of law. Democracy needs ordinary people who stand up and defend their rights against all adversarial forces that try to revoke them.

In the face of Western governments’ coordinated efforts to criminalize journalism and imprison this award-winning journalist, democracy becomes defenseless. Through the silencing of Assange, the heart of democracy suffocates. We now must become his voice, overcome fear with courage and counter lies with truth. We must penetrate distortion with moral clarity.

Jefferson who foresaw the doomed future of American government also said; “Were it left to me to decide whether we should have a government without newspapers, or newspapers without a government, I should not hesitate a moment to prefer the latter.”

Assange sacrificed his personal liberty so that we could all be free. This freedom that he is still fighting for, alone, inside Belmarsh prison, comes with responsibility. Defending Assange is a duty of everyone who cherishes freedom. We must confront the American empire and take responsibility for this beast that has been unleashed from our own government. We must stop Assange’s extradition to the US to save free press and democracy from American despotism.

Published in the May issue of The Indicter magazine, in agreement with the author. It appeared first at Common Dreams, with the same date.