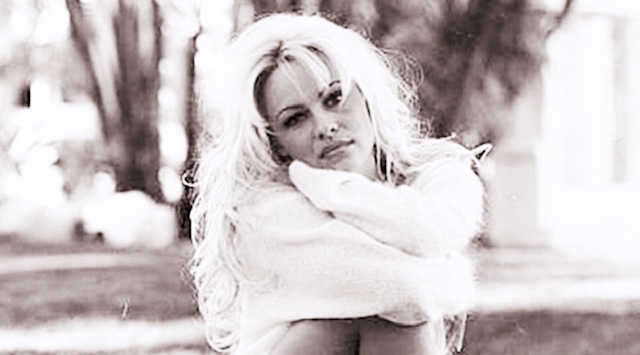 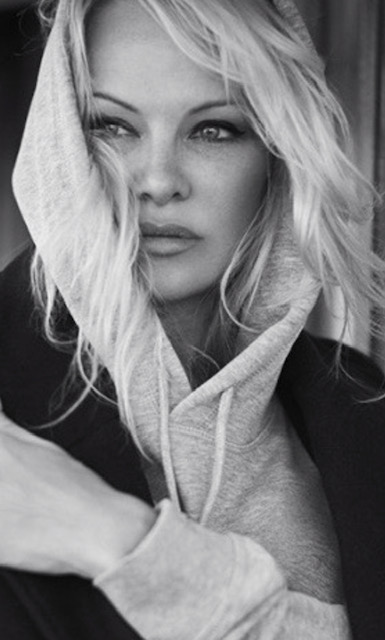 Today, I want to speak out as a woman. A woman who has survived rape and sexual abuse. A woman who knows how cruel men can be, and how deep the wounds in a woman’s soul. To this day, I remember the excruciating pain. To this day, I can feel the agony. To this day, their faces keep haunting my sleep – a fate shared by countless women worldwide. No, I would never defend a rapist, there can never be an excuse for this crime, nor for offenders enjoying impunity. We owe it to ourselves, our sisters and girls to speak out and fight complacency.

But in our resolve to do the right thing, let us never forget the danger of error, and the power of false accusations. For the same factors that make allegations of rape so difficult to prove in a court of law, make them even more difficult to disprove in the court of public opinion. Therefore, false allegations of sexual misconduct have always been the tool of choice for any campaign of mobbing, blackmail or slander. Once someone has been stamped a “rapist”, whether convicted, charged or merely alleged, his reputation has not only been sentenced to death, but has already been executed in public.

And this is the reason I speak out today. I speak out in support of a friend. A friend whom I love dearly, but whose health is crumbling, whose hopes are fading and whose time is running out. A friend who has dared to speak truth to power, who has shone a light on their criminal deeds and who is now paying the price. A friend whose voice has been strangled, whose hands have been shackled and whose name has been slandered. His name is Julian Assange.

Let us remember that Julian has never been convicted for a sexual offense, that he has never even been formally charged with one, and that there never has been any supporting evidence against him. In fact, when the rape allegations first emerged in 2010, Julian voluntarily cooperated with the police, responded to their questions and stayed in Sweden until permitted to leave. Even the chief prosecutor, having carefully considered all the evidence, closed the case, stating that “I don’t think there is reason to suspect that he has committed rape” and that the alleged conduct “disclosed no crime at all”. Only to be re-opened a few days later by a different prosecutor, and based on conveniently modified allegations of fact.

Let us also remember what both complainants have confirmed already years ago: namely that their sex with Julian had always been consensual, that they had never intended to report a crime, but that Swedish police had pressured them into doing so. And when Sweden finally wanted to drop the case in 2013, it was the British who urged them not to get “cold feet”. Sweden complied and, in the following years, went out of its way to ensure that Julian would not be able to defend himself against the rape allegations without at the same time exposing himself to extradition to the US.

On 13 May 2019, Sweden re-opened the very same grotesque investigation for a third time since August 2010. We all know that the rape allegations against Julian are bogus. We all know what is their real purpose. And we all know that Sweden acts in bad faith. As poignantly summarized by Women Against Rape: “The allegations against [Julian] are a smokescreen behind which a number of governments are trying to clamp down on WikiLeaks for having audaciously revealed to the public their secret planning of wars and occupations with their attendant rape, murder and destruction… The authorities care so little about violence against women that they manipulate rape allegations at will”. I fully agree. This is not about justice for rape. This is about the rape of justice. A tragedy for Julian, a disgrace for Sweden and a serious betrayal of all of us believing in justice, democracy and the rule of law.

To me, Julian is a personal friend, a hero, a liberator. To you, he may be an enemy, a traitor, a sleazy snitch. You are entitled to your opinion and don’t have to change your mind. But before you draw your conclusions, please make sure you have really thought this through.

If, after all I said, you still believe Julian is a rapist, did you ever ask yourself whether the mere fact of a ripped condom can really amount to “rape”? A ripped condom which has revealed no trace of DNA? A ripped condom happening in the midst of repeated sexual encounters between consenting adults? A condom which Julian is accused of having ripped intentionally, but without the only other person in the room even noticing the deed? Just in case you didn’t know: that’s all he is being accused of. Pause and think. And then draw your own conclusions.

If you really believe Julian “hacked” US Government computers, then pause and think: Why would he do so, when all the files he published had already been freely given to him by a whistle-blower with full top-secret authorization? And if you really believe that Wikileaks’ revelations have unlawfully harmed someone, then why not sue the organization for just compensation? And if you hate Julian, simply because Wikileaks embarrassed you, your company, your government or your political cause, then pause and think: Who is really to blame for the shame? Who committed the wrongdoings that were exposed? Are you sure you are not simply shooting the messenger? And what entitles you to become his torturer and henchman?

The truth is that Wikileaks never falsely accused anyone of anything, but published clear evidence of war crimes, corruption and abuse. Yet, the only people accused and prosecuted are those who uncovered the dirty truth. Sure, there is an ethical discussion to be had on the legitimacy of leaking government secrets, and on related questions of privacy, safety and national security. But then let’s create a proper forum, invite everybody and talk about it. Sure, there may be alternative ways of ensuring transparency and preventing abuse, but as long as proven war criminals are allowed to walk freely, Wikileaks may well be our best and only shot at trying to hold our leaders to account for the crimes committed against us and against others in our name.

So let us not be naïve. Julian Assange is not being pursued for rape. This is not about who Julian is, it is about who we are and how we are dealing with dissent and fundamental challenges to the secrecy with which politics, business and other affairs of public interest have been traditionally conducted. It is about whether we can torture and abuse with impunity, not only on the battlefield but also at home. It is not only about Julian’s dignity, but also about our own.

This is one of those moments in history, when each of us stands before the choice to either sleepwalk into collective disaster or to stand up and do the right thing. For centuries the mob has stood by cheering, while inconvenient women were being burned alive, purportedly for having had sex with the devil. And nobody dared to expose the lie. Today the entire world stands by cheering, as the witch-hunt goes after an inconvenient man, purportedly for being a rapist, a hacker, a narcissist and – who knows – perhaps even the devil himself? But today I stand up and speak up as a woman, as a friend, and your sister in the human family. And I ask you to shake off that poisonous black veil from your heart and your eyes and to look at the truth of what is being done to Julian. And before you draw your conclusions, please pause and think, and then stand up and do the right thing!

Appendix video, below: “Pamela Anderson speaks out after visiting Julian Assange in prison“, published in YouTube 7 May 2019. 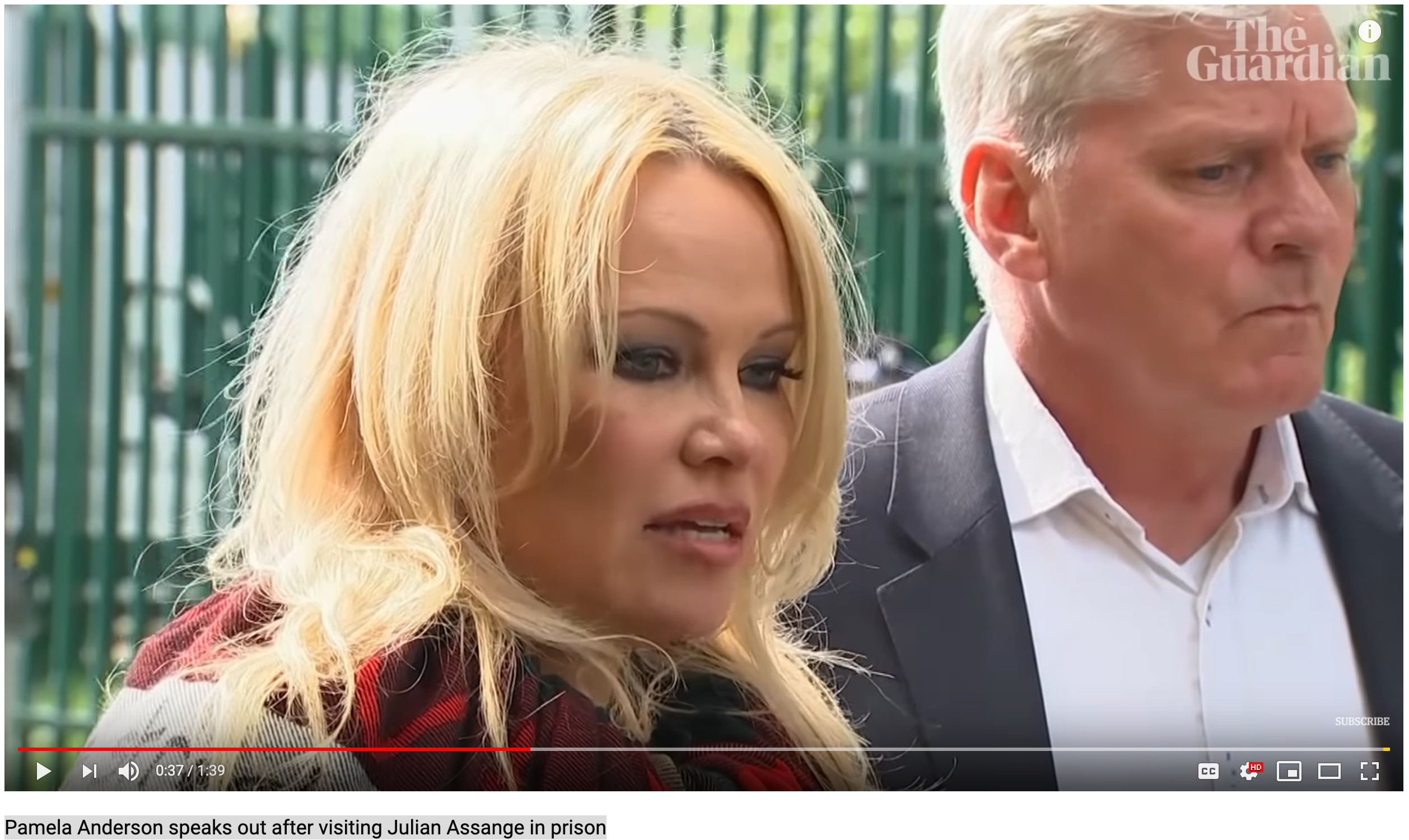