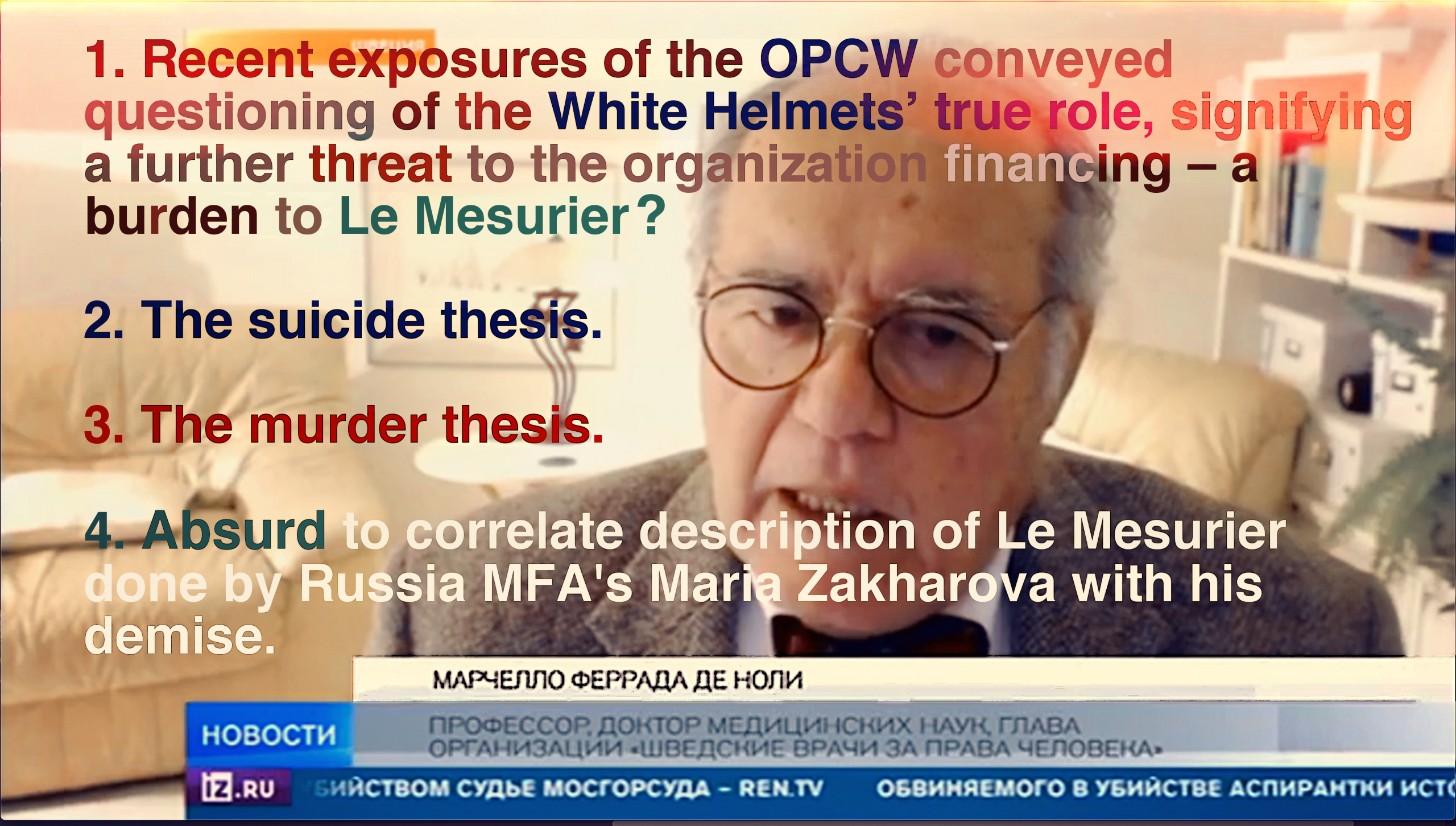 On April 11 2019, I replied via Skype an interview asked by Russian Media Information Center Izvestia, regarding the White Helmets founder James Le Measurer’s demise. Ensuing, I also sent a written summary with my views voiced in the interview.

I publish here below an extended transcription of the summary of my opinion sent to Izvestia Tv, to which I have added further context and details of James Le Mesurier’s demise. It contains:

1. Recent exposures of the OPCW conveyed questioning of the White Helmets’ true role, signifying a further threat to the organization financing – a burden to Le Mesurier?

4. Absurd to correlate description of Le Mesurier done by Russian MFA Maria Zakharova with his demise.

1. Recent exposures of the OPCW bring into question not only the veracity of its reports of alleged chemical attacks in Douma, but also the White Helmets’ true role as “source” in the disinformation ops helping to prolong the war in Syria. The revelations entail a  further threat to the organization’s financial troubles.  Was this the burden causing the heightened stress in Le Mesurier –a condition reported by persons close to his life in Turkey, and for which he sought medical treatment?

Instead of declarations by the Russian Federation Foreign Ministry characterizing James Le Mesurier as a former Intelligence officer,  a relevant context of his presumably death – irrespectively of suicide or else– is to be found in the recently revealed scandal around the OPCW . Namely, the exposures on the creation and manipulation of information done by OPCW aimed to obtain a false report on the alleged gas attacks in Syria –allegations originated all of them in Le Mesurier-founded White Helmets’ “reports from the field”.

Those revelations potentially convey further devastating blow to the organization created by Le Mesurier on behalf of the UK (and NATO) interests, which he so dutifully fulfilled through his professional life. Namely, new investigations are expected to follow suit after the Geneva Panel, and they shall shred new light on the irregularities of previous OPCW reports based on White Helmets claims, such as in the highly criticized OPCW report on the alleged attack in Khan Shaykhun, 2017.

Swedish Doctors fo Human Rights SWEDHR has also requested an investigation on the allegations put forward by Human Rights Watch –also based on unproved White Helmets claims– of a purported gas attack in Sarmin, Idlib, in 2015.

MSM gives the impression that Le Mesurier was “once upon a time” only the initiative-founder and first trainer of a dozen White Helmets. In fact, at the moment of his death –amid the White Helmets headquarters in Turkey– as the ultimate gestalt of Mayday Rescue, he was still a main actor of the organization White Helmets logistic, and hence of its survival. Any demolishing exposures on the true White Helmets role in Syria, would ultimately ricochet towards Le Mesurier, and to the powers behind his task.

The revelations of the above mentioned panel added to the pile of economic concerns of Le Mesurier –whose company Mayday Rescue had recently sustained the blow, or the menace of, the retraction from Donald Trump government of 5 million pounds towards the White Helmets organization. Before that, the Netherlands has also stopped financial aid to Le Measurer’s propaganda organization. In other words, Le Measurer was at the moment of his demise “besieged by finding worries”.

How pivotal the financial issue is for the White Helmets? My opinion on the White Helmets is that they have substantially contributed to the prolongation of the war in Syria through their deceiving reporting om alleged chemical attacks, which has been their primary mission. Also, they have participated and or assisted in concrete terrorist deeds together with Al Nusra, Al-Qaeda and etcetera fundamentalist/jihadist terrorists.

White Helmets is not the Syrian Civil Defence –which in fact do exist in Syria with that official name, and recognized by the International Civil Defence Organisation, ICDO, in Geneva.

The White Helmets has been instead described by prominent investigative journalists as “propaganda organization” (Pulitzer Prize-winning journalist Sy Hersh), respectively “a complete propaganda construct” (John Pilger, multiple award-winning journalist and documentary film maker). And the public has seen videos and photographic material of White Helmets cadres joining a variety of terrorists’ actions in Idlib, for which those may be called rather defenders of al-Qaeda and of other terrorists, than defenders of ordinary Syrians. 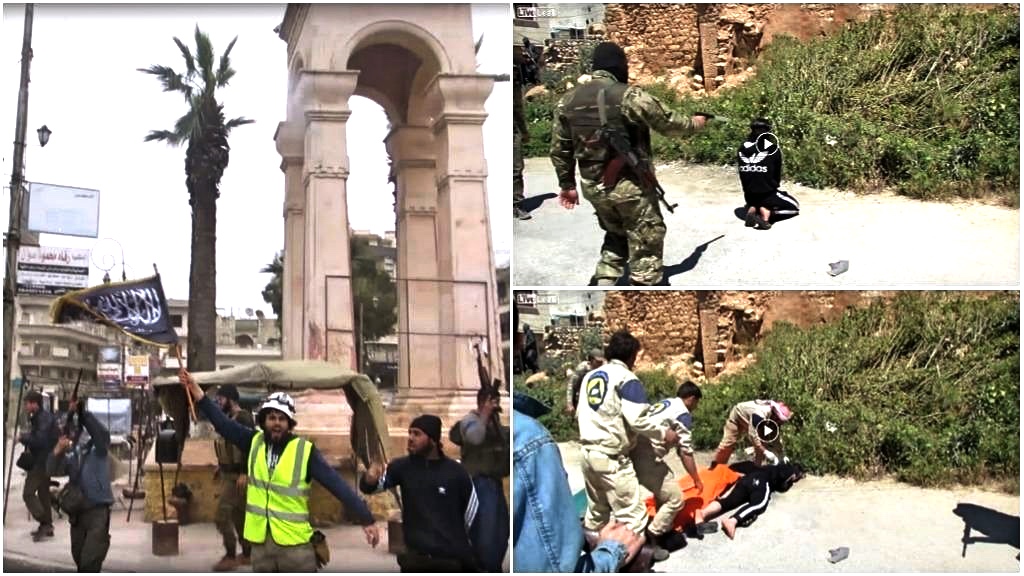 Emma Winberg reported to the police in Turkey that her late husband had recently began with “psychiatric medications“, and that he communicated to her  “15 days before his death that he thought of killing himself.” This communication would be a powerful forensic-psychiatric indicator, pointing to the suicide explanation of his demise. However, a forensic diagnose on “suicide” has not been done. The only certain is that he had a violent death caused by the observed injuries.

In forensic medicine, on order to attribute the category of suicide to a to a violent-death case iy is necessary to establish that the injures causing the demise were self inflicted, and also intentionally self-inflicted with the purpose to die as consequence.

Above: From my book “Posttraumatic stress disorder and suicidal behaviour…” Karolinska Institute, Dept of Clinical Neuroscience, 1996. Chapter “The problem of undetermined suicides”, page 47.

Also, it was reported that Le Mesurier’s housekeeper (Gul Fayzullaeva) declared that “he had appeared ‘tense’ and ‘stressed’ and complained of feeling unwell”. The auto perception of stress has a many levels. Nevertheless, epistemologically wise, only trauma-related stress (in psychiatric meaning) have significant associations with suicide diagnoses on the cause of death.

What “psychiatric” medication, what psychiatric diagnose, if any? As it has also been reported he suffered of stress, there are medications to deal with stress and/or anxiety which have nothing to do with antidepressants.

With the above said, the reporting of “recently began with psychiatric medication” would possibly indicate (if with “recently” it is meant a couple of days) that the effect of those medications had not yet counter arrest the depressive status associated with possible suicidal ideation.

The communication of suicidal ideation is highly relevant information, particularly if he would have also detailed reasons for it, or developed on the means he was thinking to use to take his life, or even whether he would have any plan to do it.  Which would be totally different if he was only reporting that he have had a transient suicidal ideation –not that uncommon.

Was he then on antidepressive medication? Did James Le Mesurier’s doctor assess he was at the risk of suicidal behaviour? Was the doctor a psychiatrist?

Also, the media bring reports on treatment for “stress”. What kind of stress? What was in the aetiology of that stress? Was stress associated with a traumatic experience? In that case the odds for suicidal proneness are also increased, epidemiology wise.

What tells against the suicide hypothesis are the apparent absence of previous behaviours by Le Mesurier indicating dead wishes or suicidal intentions (with the exception of what has been declared by his widow, Ms. Winberg). For instance, among the statements by Le Mesurier’s trusted handyman is found:

“He might not have been well, but there was absolutely nothing to suggest he was planning to harm himself. That he would never come back.”

Other peers he had have declared to have found him, recently, in good spirits.

In conclusion, the hypothesis of suicide is not so far supported by conclusive evidence.

Izvestia asked me, “who you think would have been interested in the death of James Le Mesurier?”

I replied: Who would be interested in eliminating the founder and main gestalt of the White Helmets? First, we have to review what this organization is for real, and the scenario where they operate.

White Helmets behaviors do not portrait the organization as the humanitarian NGO portrayed by the governments of USA, UK, Sweden, etc. White Helmets began as a propaganda organization of the Western powers, embedded in the ranks of the (at that time) called “moderate rebels”.

The White Helmets role does not consist in solely  participate in propaganda stunts or in providing false information “from the field” about alleged gas-attacks from the part of the Syrian government. There is plenty of documentation in the public domain about the White Helmets operatives fully armed and in company of terrorists.

However, all those terrorist formations have been fighting against each other. Those factional warfare has been happening all the time, but now these disputes have increased in facing the imminent military and political defeat in Idlib, a Syrian province in the nearby of Turkey. They were all trying to co-habit in Idlib, but those difficulties have maximized now during the defeating process.

The border between Turkey and Syria (Idlib) has become more and more diffuse, if not invisible, with the current invasion of Turkey. All those formations have traditionally been backed by Turkey. The White Helmets were given much space in Turkey to propagate their message.

Furthermore, there is another aspect to consider in the speculation of an eventual murder:

Again, these current questioning of the role of these White Helmets [See item 1, above] are at the core of the context regarding the sudden demise of the White Helmets founder James Le Mesurier.

I wrote this in my summary to Izvestia (11 Nov), “What secrets will James Le Mesurier carry to his grave? Or, putting in other way, what explanations he will not be able to produce in the course of future investigations –which it shall hopefully ensue on the White Helmets role in the Syria war?”

4. Absurd to correlate description of Le Mesurier done by Russian MFA Maria Zakharova with his demise.

Investigative journalists have in the past described in detail the ubiquitous Intelligence & Security professional whereabouts of James Le Mesurier. It is information since long digested in the public domain. I will mention two examples here:

The same author, together with Vanessa Beeley, in their analysis “Inside the “Humanitarian” Regime-Change Network Exploiting Jo Cox’s Death“, wrote (August 2017):

James Le Mesurier, who would go on to found the White Helmets in Turkey in 2013, served as intelligence coordinator for Pristina City in Kosovo soon after the NATO intervention that led to NATO being accused of war crimes for its targeting of thousands of civilians and media. 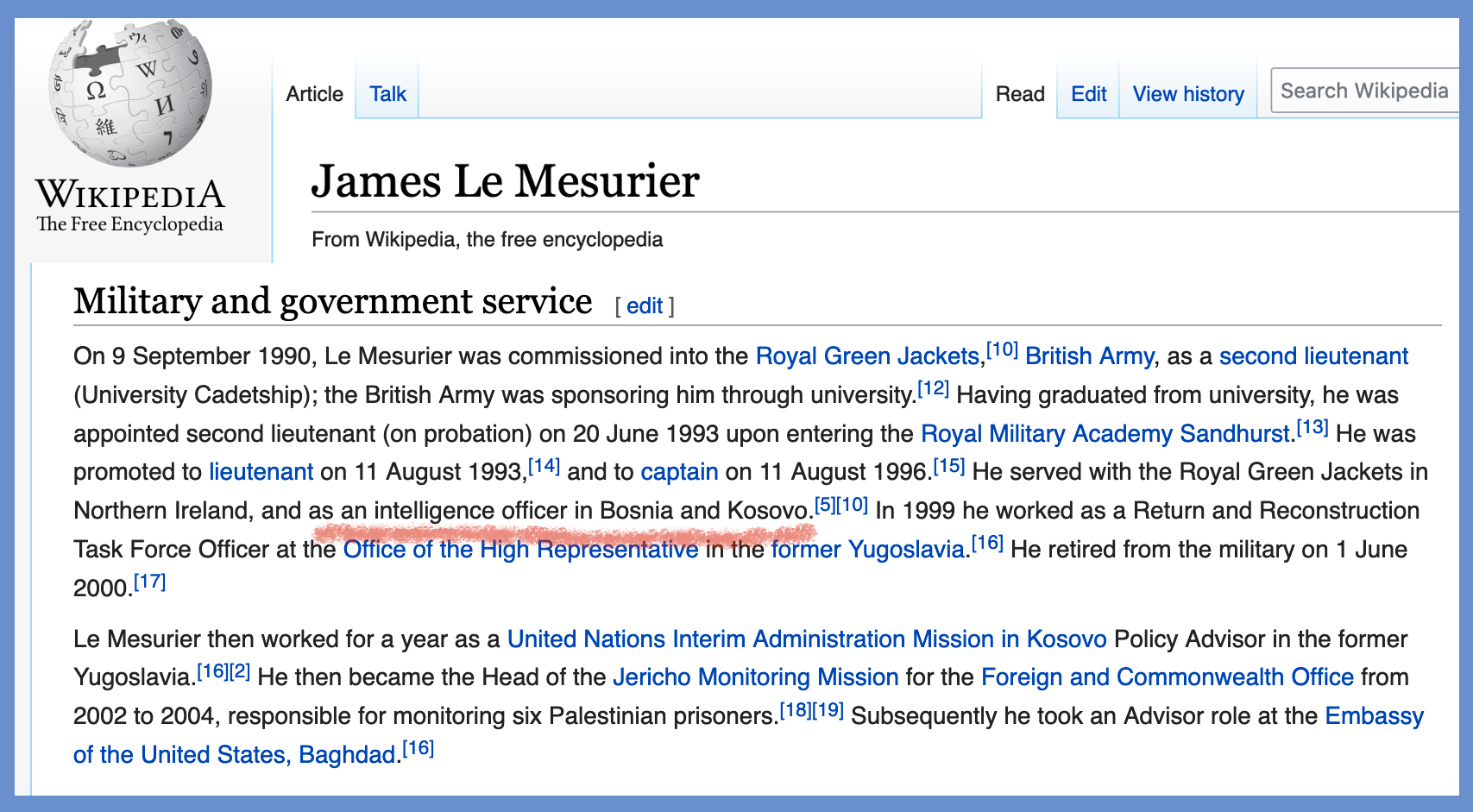