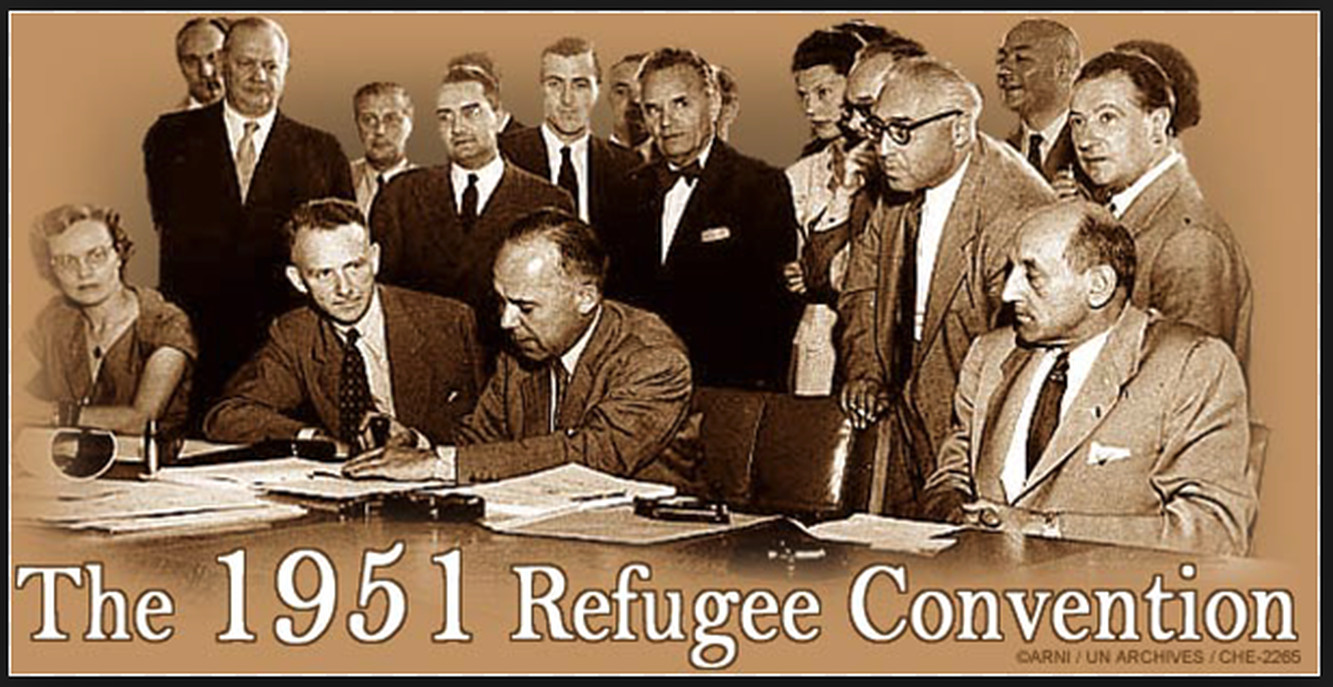 This article analyses the definition of Political Refugee in the currently applied UN Convention of 1951, and  against the backdrop of the increasing migrant influx into Europe during the last months. It concludes partly that the general ascribing of political asylum to migrations on the cause of war – but without the presence of the […]

This article analyses the definition of Political Refugee in the currently applied UN Convention of 1951, and  against the backdrop of the increasing migrant influx into Europe during the last months. It concludes partly that the general ascribing of political asylum to migrations on the cause of war – but without the presence of the criteria “being persecuted” – is not contained in the prevalent  Refugee Convention; and that these concepts should be further enhanced. Partly it states that the definitions of political asylum clearly includes publishers and whistleblowers under governmental persecution on the basis of their exposures of war crimes, human rights violations and breaches of civil liberties.

German Chancellor Angela Merkel has recently called Europe’s asylum norms ”obsolete” [1] and the ensuing High-level Conference on the Eastern Mediterranean – Western Balkans Route of 8/10 observes that the increasing flows of refugees and migrants “poses significant challenges to border management and asylum systems”. [2] Although some countries, among them Germany, have temporary abandoned the Schengen Agreement, there are no official requests for the annulment or transitory abandonment of the asylum right whose origins are found in the 1951 Refugee Convention. In our view, the imperative task ahead is to revise the 65 years old definition of refugee and the update the asylum eligibility criteria within the context of human rights.

The current endemic migration towards Europe is characterized by:

a) a mistaken view of a uniform and selective origin of the migrants – wrongly ascribed as being primarily Syrian [see below];

b) a selective targeting of certain EU countries as immigration destiny;

c) a high mobility and/or uncertainty in regards to numerous refugees’ intention on whether or where they would petition asylum.

For example, the Swedish police authority estimates that during the last month approximately 40,000 refugees have requesting asylum in Sweden while another 40,000 refugees may have come to Sweden without asking for asylum. [3]

A common misconception regarding the current “refugee crisis” is that it is mainly caused by the war situation in Syria. Correspondingly, it is assumed that: i) the outright mainstream of the migrant flow is of Syrian origin; ii) hence, migrants are war-refugees; iii) ergo war-related refugees are entitled to asylum “according to the Genève Convention.”

The media spread of dramatic images – i.e. the corpse of a Syrian child lying on a beach – served as the catalyst for the notions above, which resulted in sectors of the public driving their political representatives, or vice versa, to act for the betterment of the Syrian refugees. And this in turn exacerbated the migrant flow.

However, the Finish MP, Mr Peter Östman (Chairman of the Christian Democratic Parliamentary Group), declared recently that migrants from Syria constitute less than a third of the 350,000 to 400,000 migrants that have come to Europe so far this year. The remainder, says MP Östman, constitute a mixture of people from Africa, the Middle East and South Asia. [4] Further – as reviewed below – the idea that migrants displaced by own choice (war-related or not) are to be equated with “refugees” according to international covenants is mistaken.

Given this current flood of immigrants to Europe, we wish to call attention to the problem of the existing imprecise definitions of political asylum. Such indefinite classifications may prove seriously damaging to active human rights defenders or politically engaged individuals taking real risks in pursuing resistance to oppression. In order to secure the applicability of true political-asylum criteria in the selection of applicants, we recommend a redefinition of the concept of “political refugee” in Sweden and in generally by the EU countries.

The 1951 Refugee Convention is often confused with the Genève Convention of 1949, which has tangled the debate process. Another confusion is the use of the term “refugee” (such as in “refugee crisis” or “refugees on the way to Europe”) when actually referring to migrants – whatever their reasons – in transit to the country of their choice.

These confusions are highly relevant not only to those tasked with developing standards, but also in societal terms, because it may lead the public to project prejudiced or misunderstood notions about generic migrants onto the residing population of refugees. Further, subsuming the categories of “alien citizens,” “foreign-born,” “refugees,” and “asylum applicants” in the same generic category of “immigrants” is an oversimplification that confounds the debate to the detriment of finding correct solutions for the different situations.

The definition of refugee in the 1951 Convention Article 1, A-2, points to a person who,

It should be noticed that the above definition of refugee (Article 1, A-2) does not refer to individuals migrating for solely for reasons of war. Although it is often said that the Refugee Convention was inspired in Article 14 of the United Nations’ Universal Declaration of Human Rights (“Everyone has the right to seek and to enjoy in other countries asylum from persecution.”), [6] there is no mention of an asylum right based on displacements caused by war or similar disasters.

On the other hand, the above cite Article 1, A-2, does not specify an asylum right based on gender identity, despite its incorporation in more recent or updated documents by the United Nations. Such an asylum right may be a vital addition to the current asylum definitions.

Further, it is clear that Article 1, A-2 does include those individuals facing persecution and personal risk for defending civil liberties and human rights in the international context, including whistle-blowers, journalists, and publishers such as Julian Assange and Edward Snowden. Such true political refugees should be granted asylum in any EU country and the definition of “political refugee” must make this distinction unequivocal.

A fear of being persecuted, even if deeply experienced, is a subjective perception that is not necessarily equivalent with an actual experience of political persecution. Data from a psychotherapy facility for Chilean refugees at Sollentuna, Stockholm, in the 1980’s, showed that only a lesser proportion among those who have been granted political asylum have actually experienced combat for political aims, participation in political struggles, or even had a political engagement.

Trauma-related psychological injuries have been a frequent reason for political asylum. Our view, however, is that these cases belong to the category of asylum on humanitarian grounds. Certainly, experiences of imprisonment and particularly torture can lead to posttraumatic stress disorder (PTSD) [7] and even increased suicidal behaviour, [8] [9] but in general, PTSD alone is not a self-evident proof of the individual’s participation in political activities that entails persecution. In addition, not all experiences affect individuals uniformly and not all potentially traumatic events result in traumatic experiences or, further, in trauma-related diagnoses.

In reference to the common practice of giving temporary political asylum to individuals who fail to produce identification documents, it is important to recognize that dramatic developments in electronic communications have taken place in the 65 years since the Refugee Convention was conceived. Modern methods of communication enable both public and officials to rapidly and securely obtain documentation of identity, native country of birth, and the status of risk for political persecution.

Finally, no democratic country in the European Union should be involved in giving asylum to any individual who is responsible for the commission of war crimes. We must also consider whether this restriction should apply to individuals belonging to organisations that advocate the establishment of political systems or ideologies that deny the principle of human rights for all, regardless of gender and ethnicity.

The European Council should work for the modernization of the 1951 Refugee Convention. Conditions for the granting of refugee status should be strengthened and become more detailed. The reasons given in the Refugee Convention Article 1, A-2, (individuals persecuted on the reasons of ”race, religion, nationality, and membership in a particular social group or political opinion”) should be enhanced and better defined. Addition of such categories as gender identity and whistle-blowing activities is vital. The latter should be specifically defined to include individuals persecuted on the reason of have denounced war crimes and/or breaches against human rights and civil liberties in an international context.

Please recognize that our organization does not oppose the right of any person to emigrate to any point in the world for social, economic or personal motivation. Nonetheless, EU countries must distinguish such immigrants from refugees, most specifically true political refugees. We aim to create a more precise normative distinction between these categories, solely in order to secure a fairer selection process on behalf of the truly persecuted.

[5] United Nations High Commission for Refugees. (2012). Convention relating to the Status of Refugees.

This article was published at NewsVoice, and a Swedish version at the neswpaper Västerbottens Kuriren, VK.

Professor Ferrada de Noli publishes The Professors’ Blog, and is CEO of Libertarian Books – Sweden. He is the author of Sweden VS. Assange – Human Rights Issues, My Road to Malatesta, and Rebeldes con Causa.