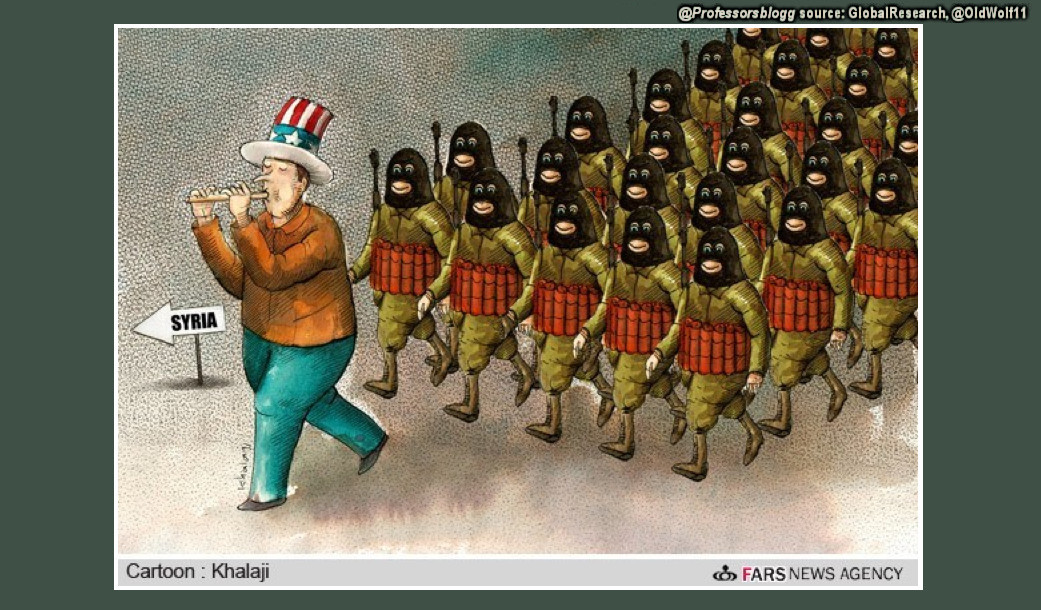 By Professor Anders Romelsjö Ph.D.. Editor-in-Chief of the ‘radical-left’ magazine Flamman wrote recently in her editorial column, “Putin has allied with al-Assad, although his regime is the root of the senseless violence against civilians in Syria”. This commonly assessment of Assad’s role is incorrect, and it can be seen as part of the US propaganda […]

Editor-in-Chief of the ‘radical-left’ magazine Flamman wrote recently in her editorial column, “Putin has allied with al-Assad, although his regime is the root of the senseless violence against civilians in Syria”. This commonly assessment of Assad’s role is incorrect, and it can be seen as part of the US propaganda disinformation.

Facts show that the war in Syria is the result of a planned intervention by the United States and allies. Obama (See DN 13/5 2015), Biden (Harvard speech 2/10 2014) and others have acknowledged that the US war policies promoted Al Qaeda and ISIS. Further:

There were of course reasons to protest against the Syrian government. Such popular protests commonly begin in major cities; however in Syria they began 17/3 2011 in the remote Daraa, a city with 75 000 inhabitants. Strong evidence exists that some armed demonstrators killed several people before security forces returned fire. Other violent protests in the country put a peaceful development in jeopardy, ultimately making it impossible.

In 29 March 6 million across Syria demonstrated in support of Assad. According to a report from the Arab League done after an extensive tour in Syria at the turn of 2011-2012, there were generally peaceful demonstrations in Syria both for and against Assad.

The United States demanded, rapidly and anti-democratic, that Assad must be removed. The Swedish government supported this standpoint, while the Syrian people’s opinion was irrelevant, as it is today.

The US started a campaign to demonize Assad

In April 1, 2012 the United States and more than 70 other states (“Friends of Syria“), including Sweden, made public their support to the US-appointed SNC (Syrian National Council) and FSA (Free Syrian Army) opposition – mainly based in other countries: the support has been concretized with weapon-shipments and, by then, with about 30 million US dollars. These measures, and the sanctions, lack support in the UN charter and in international law. Ultimately, these supports to terroristic rebels combined with sanctions against Syria have been going on for over 4 years, and with known results.

The declarations by the Swedish foreign minister and others on that Assad should have killed seven times more civilians than ISIS comes from the unreliable London-based SOHR (Syrian Observatory of Human Rights), which has ties to – inter alia ­ – the US and the Muslim Brotherhood. Their statement lacks evidence for its support. The same applies to the information about use of barrel bombs by the Syrian army against civilians. I ask, by the way, how does SOHR distinguish between non-combatants “civil” from plainclothes rebels, who want to appear as civilians?

Russia carries out more, and probably more effective bombing in cooperation with the Syrian army, which since long constitutes the main force against terrorism on the ground. The protests from the US and the EU towards the Russian bombing show the hesitation of their “struggle against terrorism”.

The recent meeting in Vienna stressing cooperation for a political solution, and hopefully for a joint struggle against the ISIS and similar groups, is to be welcome. Basic democracy implies that the Syrian people should be free to decide their future and whether they will wish to choose Assad or another candidate. So far, various sources including NATO tells of the popularity Assad enjoys among the Syrian people. And who should otherwise decide? Syria has carried out democratic reforms. Contrary to a common misbelief there are several political parties in Syria, and they are active in the Syrian parliament.

References relevant to statements in this article can be found in the article (Swedish) “Is Foreign Minister Margot Wallström victim of anti-Syria propaganda?”

Professor Anders Romelsjö is the publisher of the political blog Jinge.se

He is a co-author of the book (Swedish) “USA as World’s Police”.

This article was written before the Paris attacks.  A Swedish version has been published in Flamman.