I address here some problems in the Ukraine-war media coverage currently practiced in Sweden. I will also refer to the consequences that such biased media coverage has for the security of individuals and organizations which have been critical to that media coverage in the Swedish stream media. And how I became listed in the Ukrainian “Myrotvorets”, widely referred in social media as the “Ukrainian hit list”

Against the backdrop of that report, I was asked by RT News (broadcasted 29 October 2022) the following:

According to your investigation on Swedish media coverage of Ukrainian conflict, source criticism becomes the main problem. In your point, why this issue is so problematic?

“It is problematic because in source criticism is mandatory to do a proper assessment of the credibility of the information, attending to how reliable the source is, and investigating the possible bias of the source. Also, whether there is an agenda behind the promoting of that information which the source is providing.

I am aware that this might be at times difficult to assess even among experienced journalists with professional ethics and personal integrity. Yet, there is a simple formula to tackle that situation when source criticism appears difficult to practice. And this is to provide the public also with the version that emanates from the other party. Balancing the report, sort to say, or at least doing some effort to cope with it (the non-bias imperative) –instead of neglecting that.

And this is what is not usually done by journalists employed by the Swedish mainstream media, being this quite noticeable in the last decade. And now, particularly in the reporting of the Ukraine war scenario.

We at SWEDHR have compiled about one hundred cases of those abuses against the human integrity of individuals and against organizations or representatives of anti-war voices.

Cases of abused and/or war crimes exerted by the Ukrainian forces against the civilians in Donbass, or soldiers of the Russian side, even video-documented (plenty of them made public in Telegram), have never been commented in the Swedish mainstream media.” 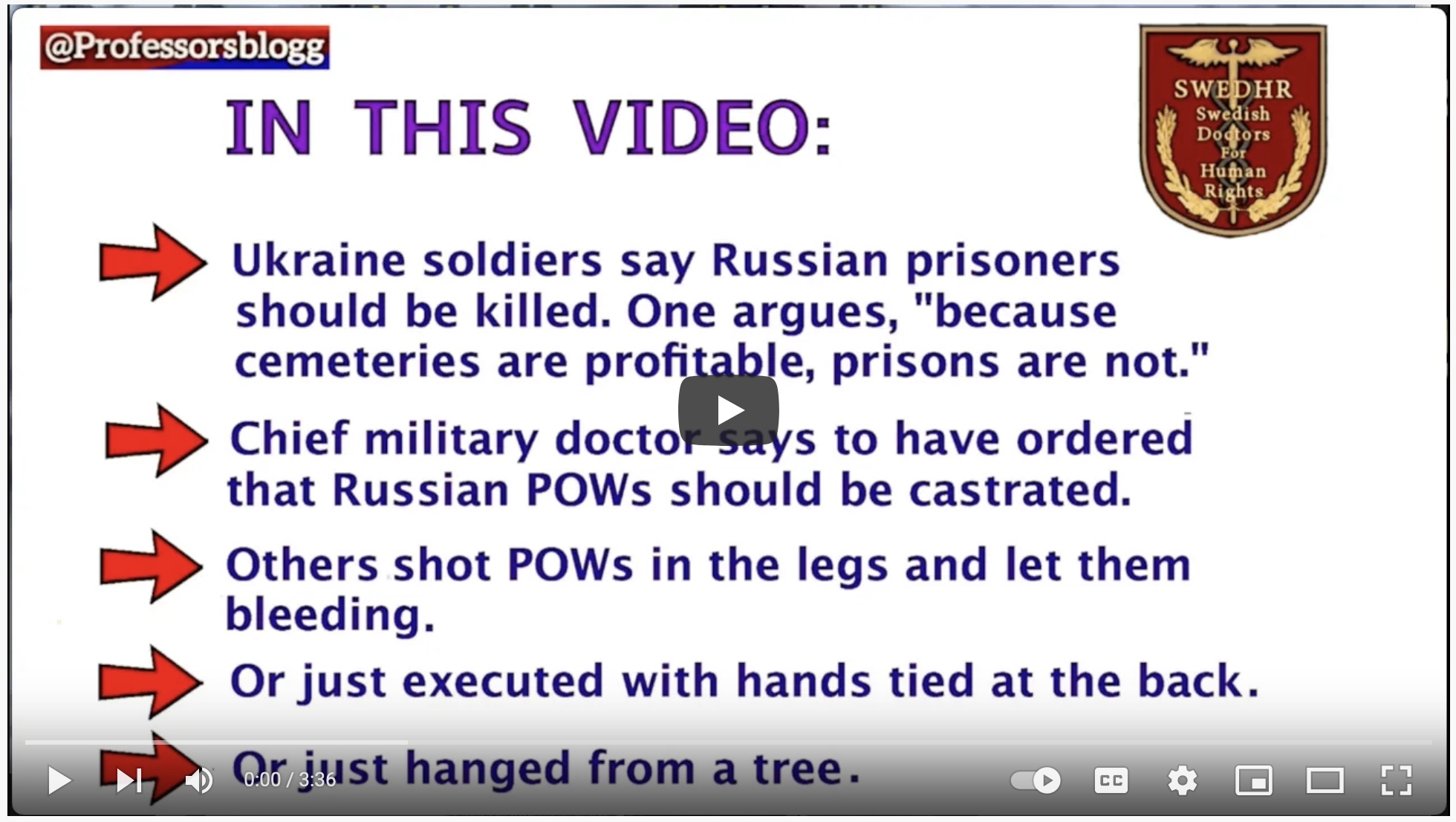 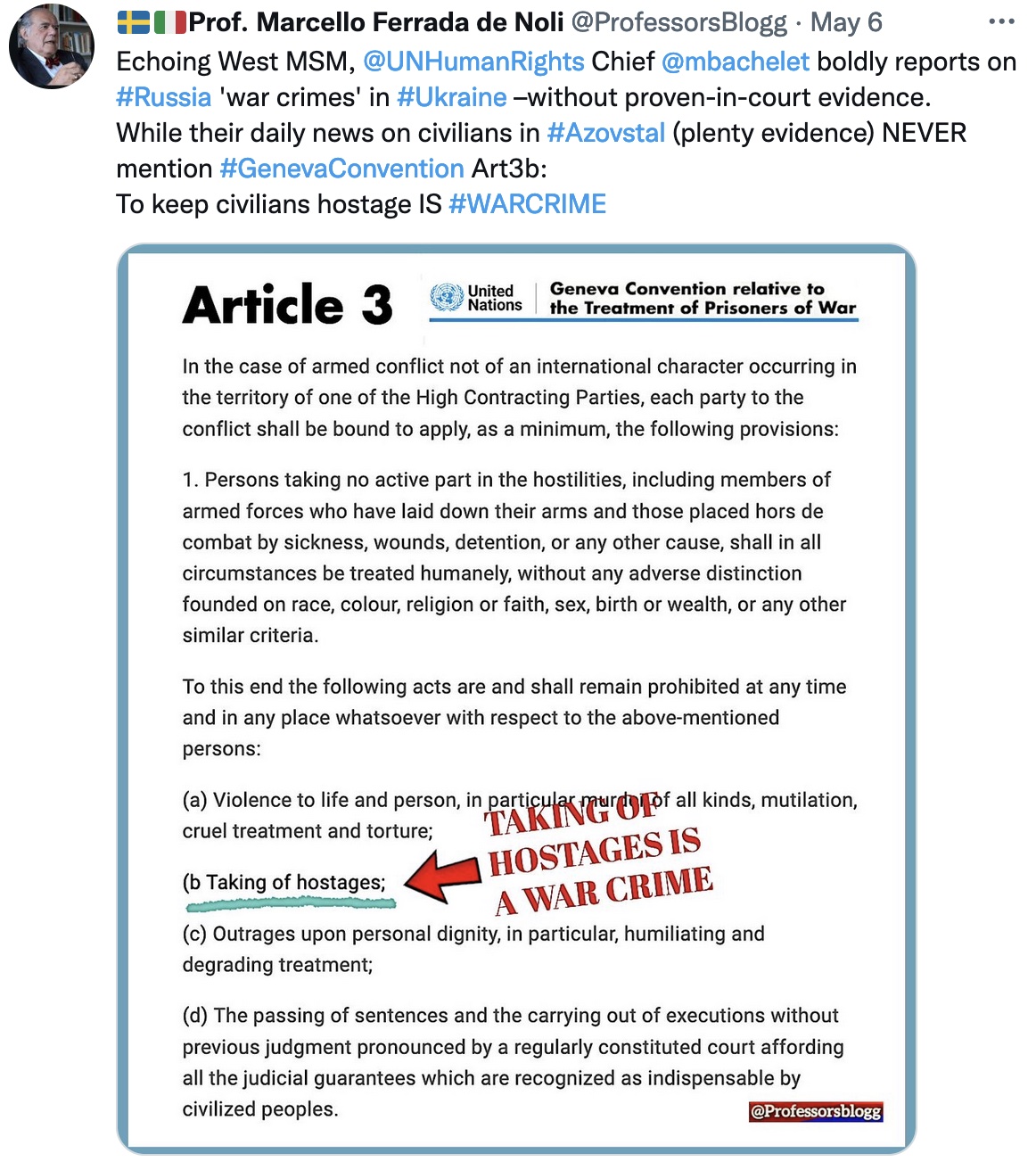 Serious human-right abuses against the population of Ukraine from the part of the government or Ukrainian cilvilians are not reported, despite its proven existence –including those breaches against freedom of the press in Ukraine, detention, and incarceration of journalists, etc. –this last item which would be a “natural” concern from the part of their Swedish journalist-colleagues. 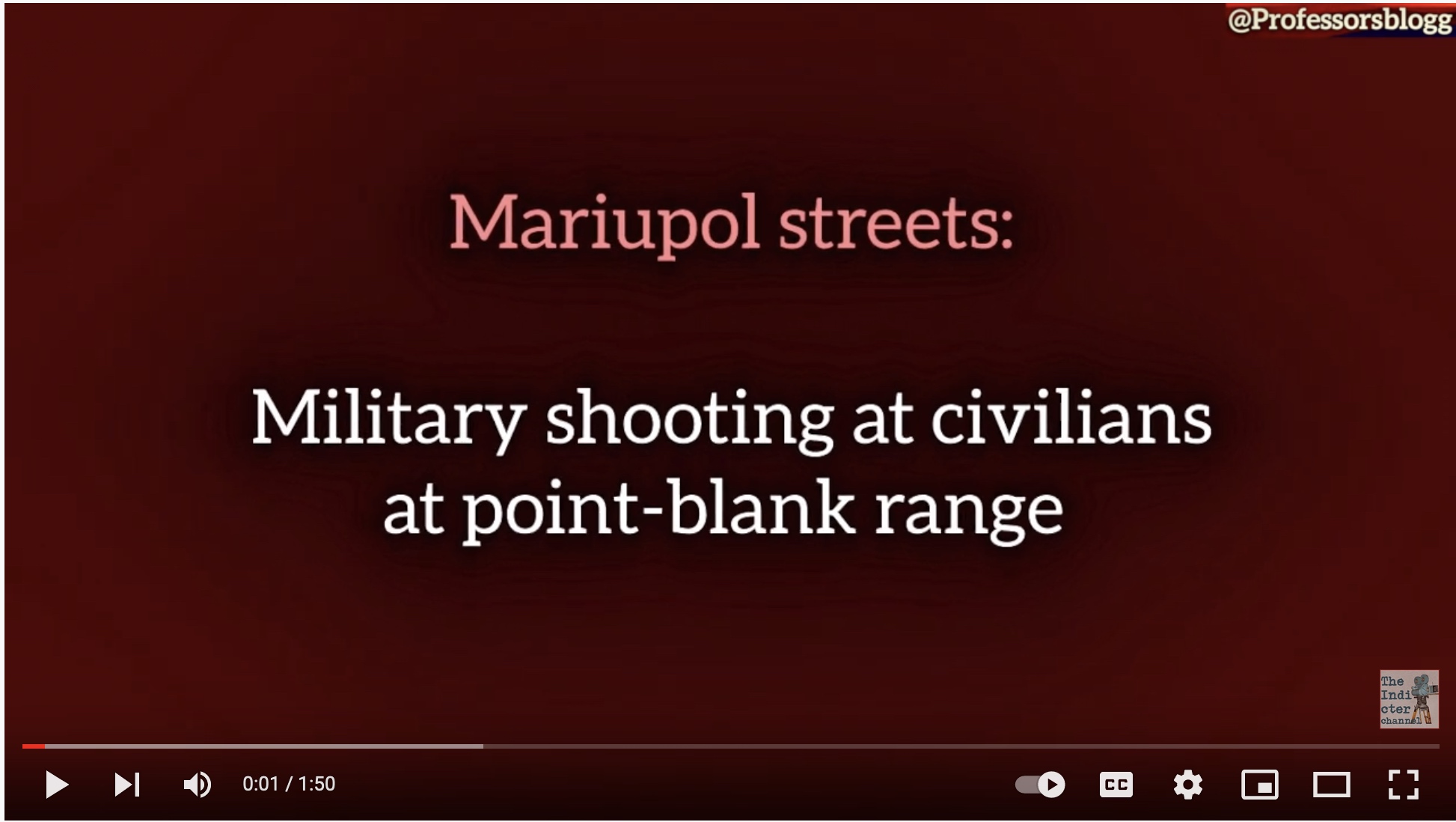 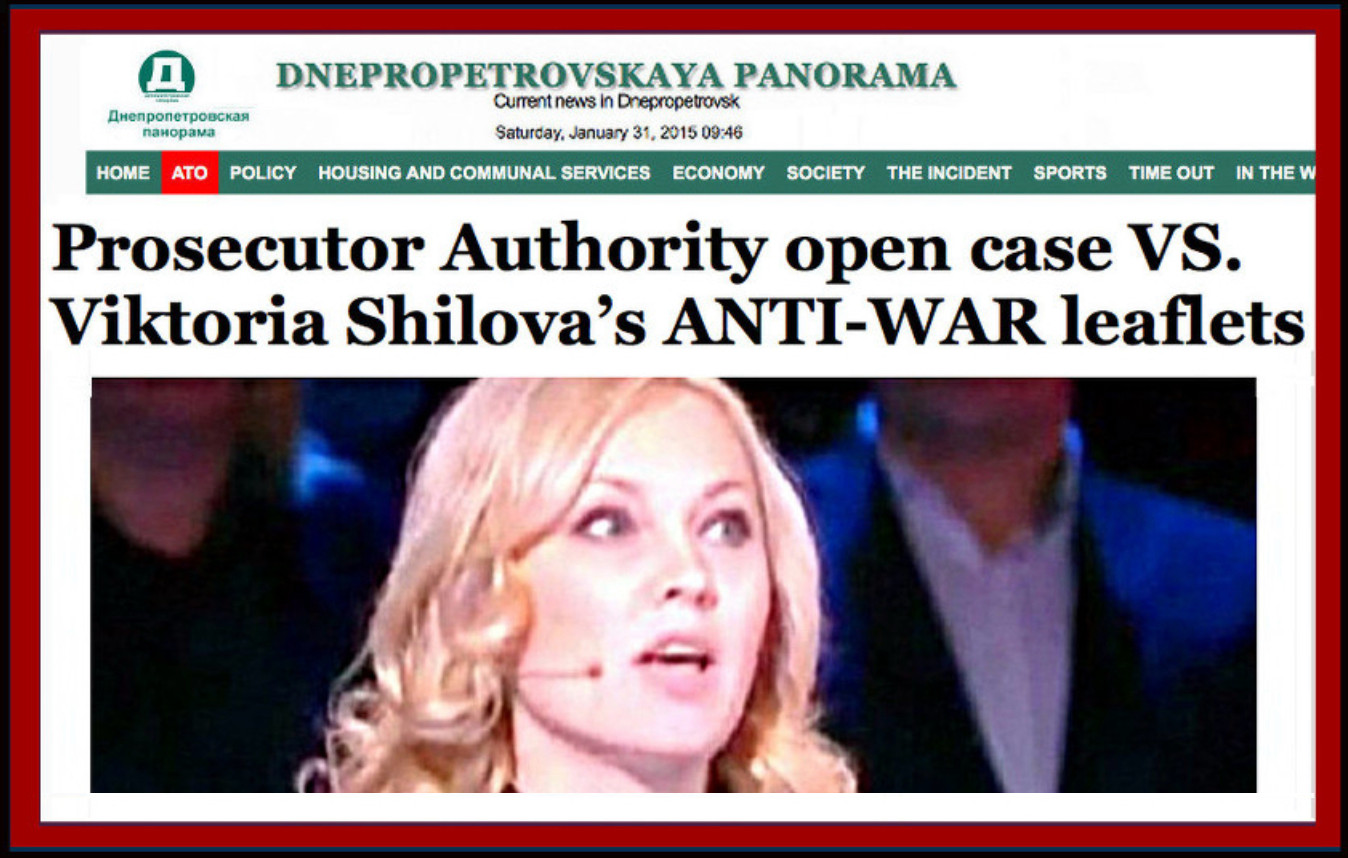 I have done a fourfold breakdown of the expression “fake news” –when referring to war reporting– in the following categories:

– a) Fake news as the reporting as “true” something it has never existed.

– c) Fake news as the transforming of an existing reality, ergo concealing the big picture, or the context. Like in showing trees, but not the forest, to serve an agenda.

– e) Fake news as the use of demonization of a source, or the vicious attack ad-hominem against the author (person or organization) of the reporting that contradicts the narratives created by the West MSM.

An example of a) above, is when newspaper Svenska Dagbladet (SvD) reported that Turkey had closed the sea for Russian vessels. That was not true, and I twitter-linked to Svd about that important error. They did not care to correct.

Examples of “b) fake news” are plenty. Some most notorious have  been the reporting of the “Busha massacre”, or the reports on “mass graves”. There is published evidence that points to another version of what really happened (see below), which Swedish MSM did not care to report. Another illustration is the reporting of what happened in the Maternity Hospital of Mariupol. In both cases the Swedish media presented as irrefutable the Ukrainian version. 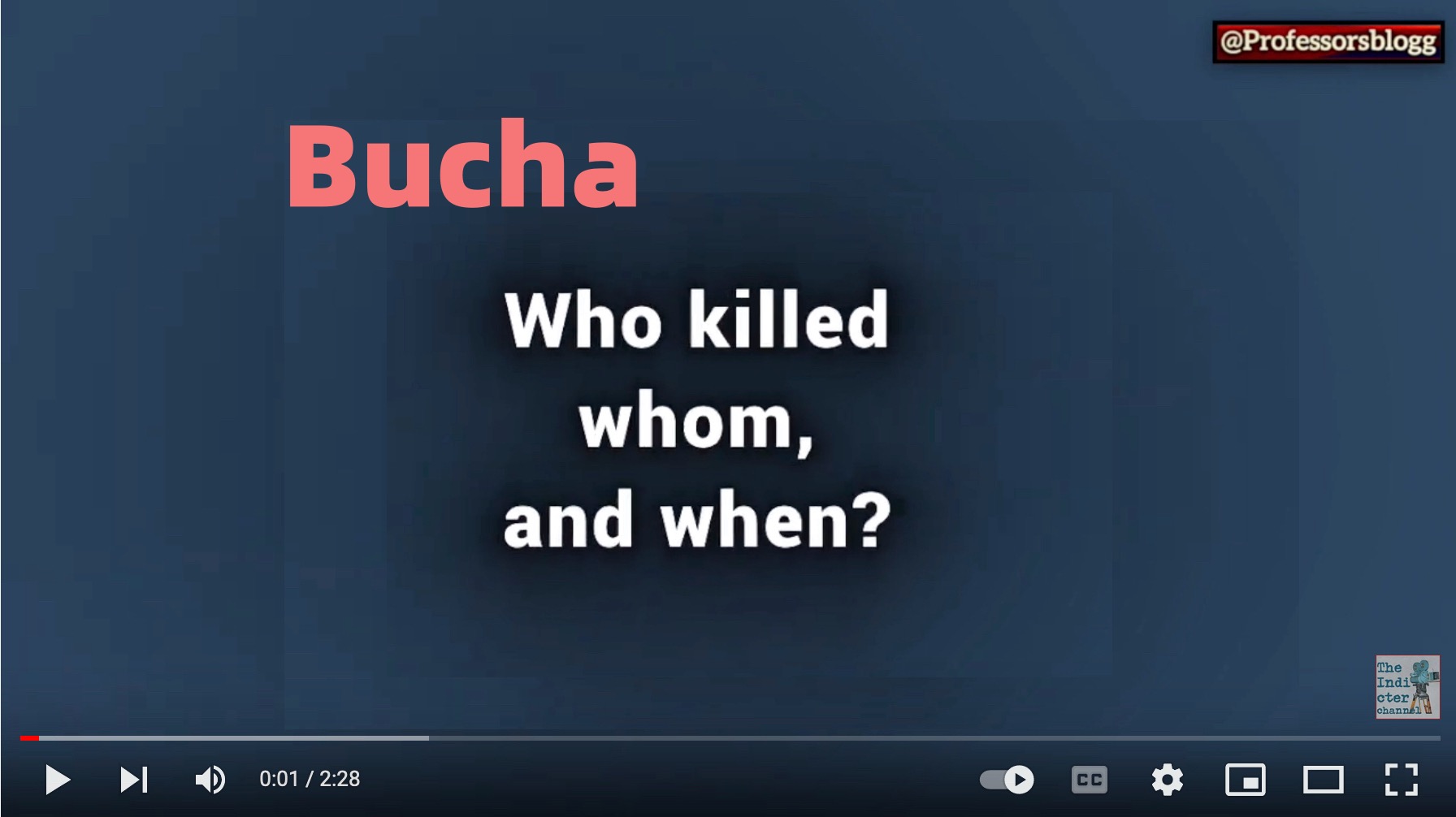 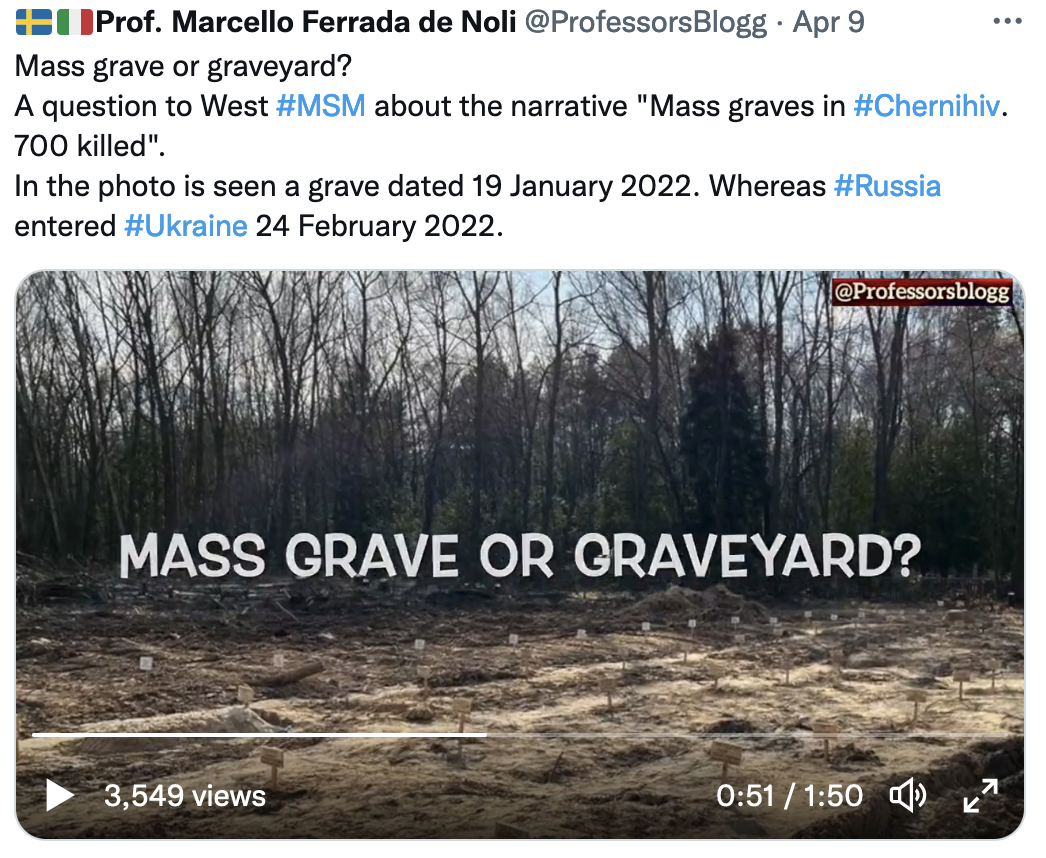 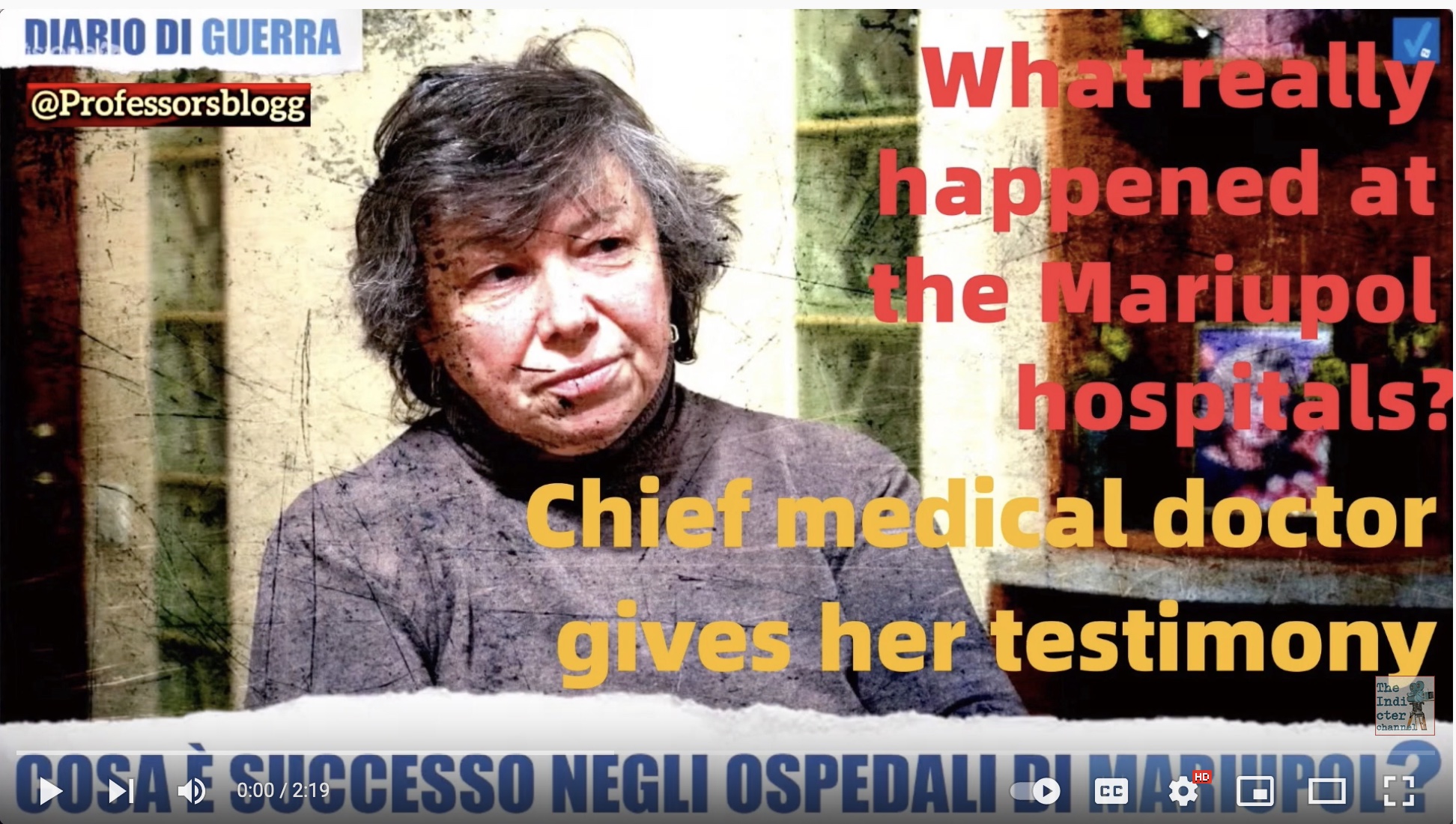 What really happened in the Mariupol Maternity Hospital? Click on image for video

Regarding the f) variant of “fake news” –the demonization of a source, accompanied by the attack ad-hominem, and not seldom libelous, against of individuals or organization critical to the MSR narratives– is something that may end in serious consequences for the targets of this fake-news variety. A variant of the so-called ‘kill the messenger’ artifice. It can very well illustrated with the attacks that our NGO Swedish Doctor for Human Rights experienced by the part of Dagens Nyheter (DN). This had extraordinary consequences, as I explain below.

Serious consequences of ad-hominem attacks by the Swedish media

One example is the media operation executed in Sweden against the NGO Swedish Doctors for Human Rights (SWEDHR) in 2017, where DN “exposed” that the SWEDHR chair person has characterized the Ukrainian junta “as ruled by fascists”. .

In that occasion, DN run a large reportage about SWEDHR in which in no way disputed the evidence, argument and conclusions of the findings done by the physicians-specialists in our report probing that materials uploaded by the UK/US financed organization “White Helmets” about claimed gas attacks in Syria were fake, and even represented medical misconduct. Instead, DN tried to discredit our organization by reporting “bias” from our side, argued that in The Indicter –our geopolitical and human rights magazine– the chairman of the organization had characterized the Junta in Ukraine “as ruled by fascists”.

In true, what I have said –and still maintain– is that some members of the government installed after the putsch orchestrated by the U.S. (in complicity with the then Swedish minister of foreign affairs Carl Bild and other EU actors) were conspicuous members of neo-Nazi organizations. There was, for instance the leader of Svoboda (formerly the Social National Party of Ukraine). 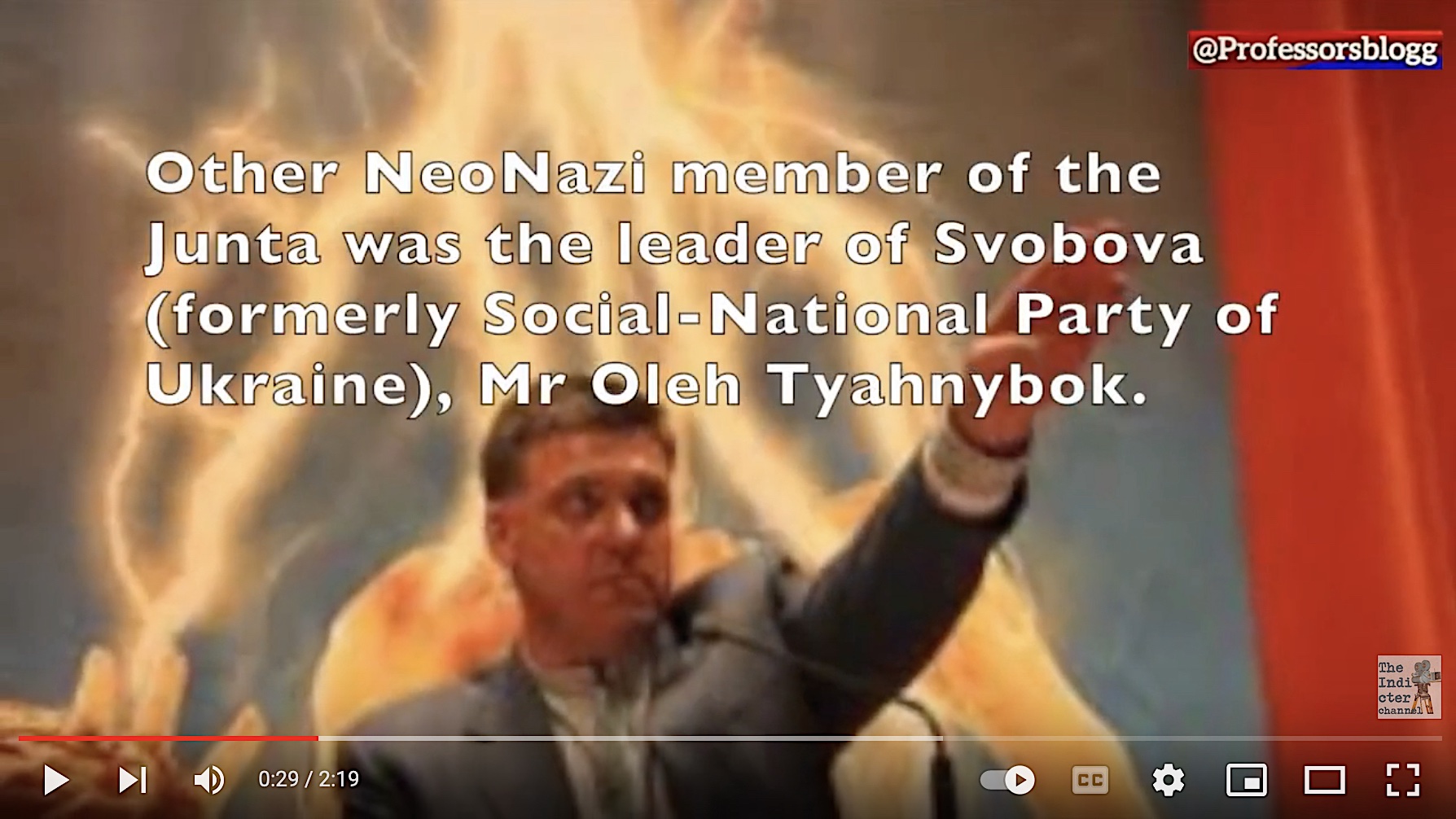 From the DN article:

Translation: “SWEDHR and its website The Indicter shows that the group, since the starting in 2015 carry out a clear agenda. The group representative –(Marcello Ferrada de Noli, ed,)—thinks among other that Ukraine is governed by fascists, and that Swedish media, like DN, spray ‘Russophobic propaganda’ “

The attack on SWEDHR in the DN report was reproduced by the Swedish News Agency TT, and afterwards published in all the newspapers of the Swedish MSM.  Again, nothing in those republications referred to our evidence-providing about the false claims by the “White Helmets”. In the same fashion, it was reproduced by Le Figaro (who also ran an ad-hominem attack against in the same terms against the SWEDHR chair), Der Spiegel, Libération, etc. Afterwards, same DN attacks were reproduced by the US based pro-NATO publication “Coda Story”.

(Myrotvorets had in these weeks a renewed publicization in social media due to the claim of a temporarily inclusion of Elon Musk in the hit list. This, it is argued, after Musk announced that his enterprises would not continue to support the Starlink system used by the Ukrainian Army. But he apparently changed his mind, and apparently so did Myrotvorets about the claimed inclusion of Musk in that infamous list.

As seen in the translation here below, I am the list as “founder of Swedish Doctors for Human Rights”. 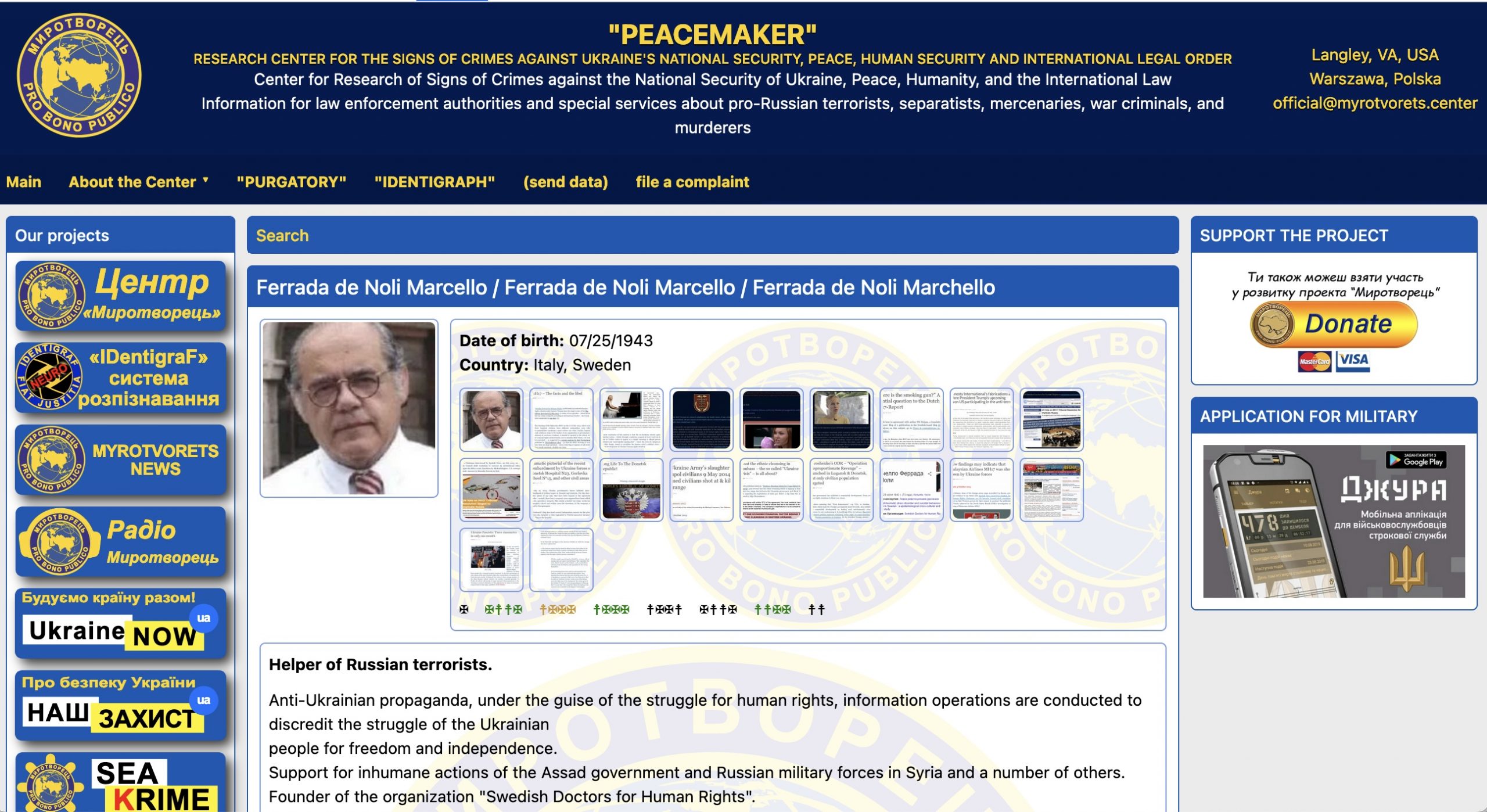 So far it would be difficult to probe a direct causal-connection between that referred ad-hominem publication in DN and the ensuing listing of my name in the Ukrainian Myrotovorets. But the fact is, firstly, the characterization of “criminal” that the list is doing about me, expressly mentions the “propaganda attacks against Ukraine” –something that DN was first to spread in the international “big news” sphere. Secondly, the inclusion of my name appeared by the times of the DN publication, also reproduced in international outlets. Thirdly, the Ukrainian authorities and the Swedish MSM monopoles appears to be guided, in my opinion, by the same ideology and geopolitical patron.

To make my point more explicit, I reproduce here below an image with the first page of the Swedish newspaper DN, at the occasion of an accidental visit of then President Barrack Obama to Stockholm. It reads “Welcome to Little Sweden Mr President”

Concomitantly, the so-called debate about the NATO membership of Sweden against the backdrop of the Ukraine conflict, was in fact a travesty of a debate. To start with, opinion articles of actors that hold a critical position to the official narrative were never, or almost never published.  In my case I was forced to publish my opinion pieces in outlets based outside Sweden, including in America´s independent outlets. And in The Indicter, of course, which is only a monthly review.

They would say that indeed it was a discussion in the media about NATO. But what kind of discussion was that? It was more about the modality by which Sweden was going to cooperate with the US and other NATO members. In that debate, practically it was not given a visible space to those that opposed the whole idea of a NATO membership. Which is for instance the position we had at the SWEDHR.

In turn, what the docile media of Sweden projected in the public sphere–like in Plato’s cave allegory– was the absence of a real Swedish political debate with the participation of the public. For instance, the government never called a referendum on that issue. They did before about the EU membership, about the Euro, etc., but not on this essential issue for the national security of all and each member of the Swedish society. In other words, the Swedish non-democratic media was only the mirror of the non-democratic political conduction that Swedish political authorities carried on in the NATO issue.

Let me give another illustration. It is said that at least the Parliament of Sweden approved the NATO membership. Neither this was strictly democratic, as a variety of PMs were elected by their constituencies precisely because by elections times those candidates opposed during their campaigns a NATO membership of Sweden.

Finally, the issue of source criticism becomes problematic when, like in the case of Sweden, in the main there are only two monopoles that owns most of the media of Sweden, meaning Bonniers and Schibbsted.

How these flaws in the war news reporting is main responsibility of the reporting journalists or of the editorial management, or the economic owners of the outlets, well I think it is a combination of all that.

FOLLOW UP: and to what consequences it may lead, if media avoids fact-checking before publishing reports?

That creates a biased one-sided coverage of the crisis, initially prompting to the public to wrong conclusions. However, in the long rung it could represent a boomerang to the powers controlling that media. For truth always manages to surface, even if it takes time. It is as Lincoln is quoted saying: