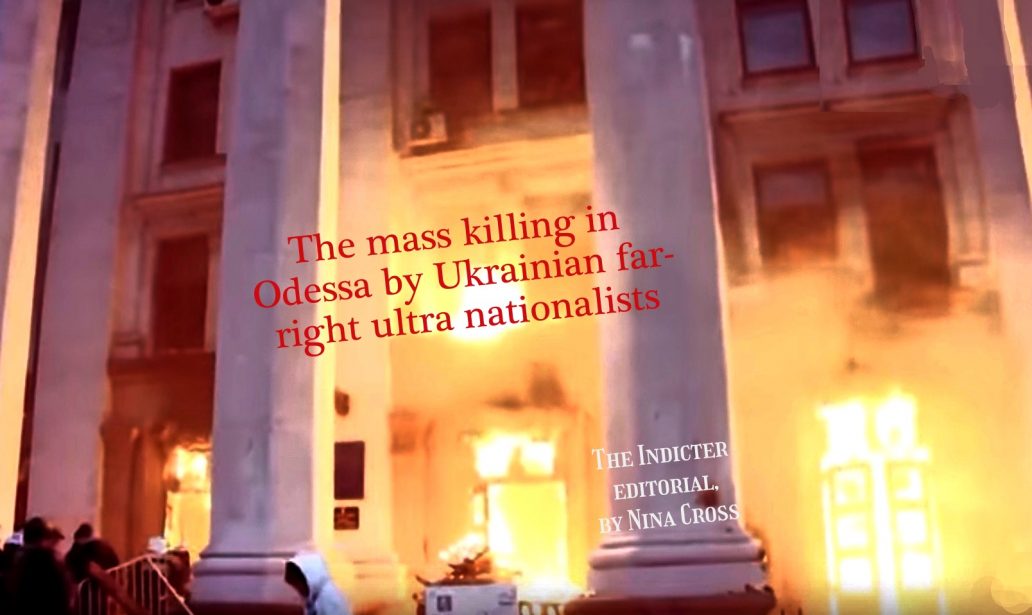 The Indicter editorial, by Nina Cross.

We remember today the people who died in the massacre of May 2nd 2014 in the House of Trade Unions in Odessa, Ukraine.  Today marks exactly eight years since the mass killing by Ukrainian radical nationalist groups of Odessan residents who rejected the instalment of a US-backed government in Kiev following the bloody coup.   The people of Odessa had voted strongly in favour of Viktor Yanukovych, the democratically elected President, ousted by the coup.

Rallying in the city of Odessa at the end of March 2014 the anti-fascist protesters wanted a referendum to determine regional autonomy.  They set up tents on Odessa’s Kulikovo Field Square, in front of the House of Trade Unions, and remained there for several weeks.  On May 2nd 2014, organised nationalist and fascist groups, burned down the tents.  Many of the anti-fascist protesters, including children, fled into the building.  The building was set on fire and many people perished from smoke inhalation or burned to death.  However, some victims were shot, others strangled to death and beaten to death.  There is also footage of people being hacked up and shot after escaping, while others were beaten.  These murders provide evidence that the deaths were not all the result of an arson attack that spiralled out of control, but were intentional and deliberate acts of mass murder and terrorism. The reported total of deaths in the building is 42, but it is possible, given the number of people missing, that the total could amount to over 100.  It is also reported that sixteen people who escaped the fire were later murdered.

Nobody has been held to account for the mass killing.  Independent investigations and analysis not associated with the Ukrainian authorities have provided evidence showing coordination between the authorities, those oligarchs manoeuvring for political power behind the authorities, the police, and the security services using nationalist and far right groups.

Witnesses have produced testimony that:

The usual number of police seen in the vicinity was significantly reduced so there were not enough police present to stop the massacre.

The fire brigade found excuses to not help when told about the fire, and even stopped answering the calls for help.

When the fire brigade did arrive, the firefighters were attacked by the Right Sector nationalist group but the police stood by and watched, later claiming there was no order to intervene.

The House of Trade Unions was kept open for weeks after the fire, allowing anyone to walk in and contaminate evidence.

No proper or independent investigation of the murders has been carried out to bring those responsible to account, and this has been recognised by the UN Human Rights Commission.  The UN Human Rights Monitoring Mission in Ukraine (HRMMU) has itself provided testimony about the event.  However, it has provided from the outside a description of equal responsibility:

“…both sides of the clashes were violent…

“We were present on the scene and witnessed how the ‘pro-federalism’ groups began throwing stones and Molotov cocktails at the participants of the unity march. The situation spiralled out of control as the police failed to respond effectively to violence from both sides, even though they had been warned in advance of the high possibility of violence…

Mission’s staff saw both sides throwing stones and Molotov cocktails and heard the sounds of gunshots coming from both sides, and then saw the House of Trade Unions on fire.”

Did the mission staff really know who they were observing?  Evidence exists to show coordination of the attack included the use of provocateurs, who wore red armbands on their sleeves to distinguish themselves from the genuine peaceful activists, and were used to initiate fighting. Given the bodies in the building showed clear evidence of torture and murder not caused by arson, but suffered before the fire took hold, and given this could only have been possible by violent radical far right groups entering the building with the intention to murder, how can the HRMMU, in its 2021 update, keep to its initial assessment, referring to the atrocity as “clashes that eventually ended with the loss of 48 human lives”?

Has this omission been of benefit to the Ukrainian authorities?  The Ukrainian public officials such as Vladimir Nemirovsky, then governor of Odessa, told ‘Euromaidan protesters’ on Face Book that they had acted legitimately, as they had neutralised “armed terrorists.”  Presidential candidate, Yulia Tymoshenko, thanked the ‘protesters’, and the attorney general accused those murdered of being “Russian terrorists”.

Only when the ‘joint responsibility’ narrative is crushed and the deliberate and coordinated nature of the mass killing in Odessa is addressed by governments and legal and human rights mechanisms, can a proper effective investigation be possible and those responsible held to account.

The Indicter and Professor’s Blog have produced analysis over the years on the events of Odessa in 2014, including analysis of video and photographic footage.