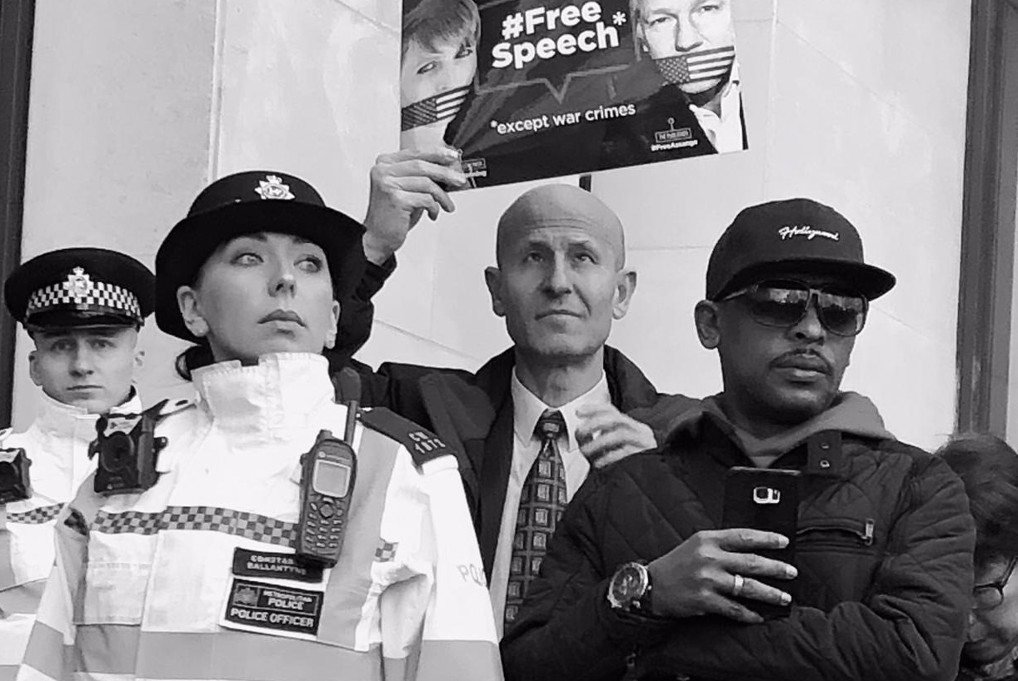 By Prof Marcello Ferrada de Noli, chairman of Swedish Doctors for Human Rights, SWEDHR Outside Westminster Magistrates Court, April 11, 2019. Photo by Erik Sanberg, Associate Editor at The Indicter Magazine We have repeatedly expounded the issue of right to existence as the primary of all human rights, and of human rights for all. War […]

We have repeatedly expounded the issue of right to existence as the primary of all human rights, and of human rights for all. War and its willfully killing is thus N° 1 enemy of such humanity’s essential right.

Hence, we have warmly supported the denounce of preparations, propaganda and perpetration of occupation-wars, illegal wars, war-abuses, crimes perpetrated under the name of one power’s ‘national security’ against the international security of many nations, the widespread killing of civilians, the using of prohibited chemical weapons, etc. All that denouncing has been a leit motif in the endevours of WikiLeaks. Julian Assange, the founder of that organization, has established an example of civil courage, a behaviour  which has been followed by important other exposures at different latitudes.

This movement, which also perfectioned the mechanisms of modern alternative media to counter arrest the disinformation routine that has characterized MSM,  have provided free information, and thus education, as to how deal with the alienation pursued by the messages of those in power that are transmitted by the media at their service.

The arresting of the WikiLeaks publisher Mr Julian Assange signifies not only a hard blow for Western democratic principles referred to freedom of speech and freedom of the press. It also entails a further threat to all honest journalists, public and private officials which have undertaken the honourable mission of  denouncing war crimes allegedly perpetrated by NATO and its aligned forces in various scenarios of illegal wars.

On the other hand, amidst the dramatic circumstances in the now unpredictable fate of Mr Julian Assange, emerges another truth. This is, the Western media  in consensus, invariably dismissed the risk of extradition of Assange as the invention of “conspiracy theorists” –referring to the NGOs that defended Assange’s human rights. Instead, the first news arising after the arrest of Assange was known, is the public acknowledgement of an extradition request from the part of the US government. Hence, it was not “Assange’s paranoia”. And our analyses were accurate.

Let’s began by clarifying that Julian Assange has never been charged with any crime, neither in Sweden nor elsewhere. Instead, he has been made responsible for the legendary exposures in “Collateral Damage”, the documentary which denounced atrocities in the Iraq war, including the killing of civilian journalists ­–and already viewed by over 16 million people.

Due to WikiLeaks exposures on alleged US war crimes in the Iraq and Afghanistan wars,  the US has been after the extradition of Assange since 2010. After the publication of WikiLeaks of over 70,000 classified documents covering the war in Afghanistan, the US urged nations participating in the US-led coalition in Afghanistan to initiate prosecution against Julian Assange. This is documented in the ‘Snowden papers”, which text relevant to this issue  was republished in The Indicter Magazine in 2016. Of the countries then consulted, only Sweden complied with the US request and subsequently they opened an investigation against Assange on alleged sexual offences to permit a warrant for his arrest. Those accusations probed to be unsustainable, and the case had to be dropped afters years of Assange being held under the Swedish arrest warrant.

The real reason for the arrest was, according to open investigations SWEDHR has access to and which we earliest denounced, the extradition of Assange to the US.  A sealed process against Assange had been opened in Virginia –also negated by the authorities at that time– and which only recently has been confirmed by the U.S. Department of Justice.

While in house arrest, and in order to avoid the impending rendition to Sweden from the part of the London authorities, Julian Assange sought asylum at the Embassy of Ecuador in London.  The government of Ecuador under the presidency of Rafael Correa granted political asylum to him due to the risk of his extradition to the US from Sweden.

The UK then instructed Sweden to protract the ‘investigation’ on Assange, to which the Swedish authorities docilely complied. Meanwhile the process against Chelsea Manning continued.

But after Sweden dropped the investigations on Assange, The UK has said that it will arrest Assange anyway in case he leaves the embassy’s premises. This on the argument that Assange would have violated the conditions of his house arrest by seeking instead asylum at the Ecuador embassy.

In the meantime the United Nations Working Group on Arbitrary Detention (UNWGAD), had requested the immediate freedom of Mr Assange.

When I met Julian Assange at the embassy in London in August 2017, his situation had been substantially changed. Although efforts deployed by the outgoing ambassador, Assange’s health was deteriorating after years of isolation, sun deprivation, etc. He also told me about the unjustified accusations of involvement with Russian interests around the US presidential election narrative, which he categorically denied.  But the change of government in Ecuador had started to show consequences for his juridical, and physical safety at the Embassy.

President Moreno had another stance on issues of Ecuador’s national sovereignty – read, relationships with the US government. which openly consider South America as “our backyard”–  and in pursuing better terms for financial deals for his country with the US, president Moreno was said to include the fate if Assange in those negotiations. At east, according to WikiLeaks reports.

One first complaint against Assange was his use of Internet connections, provided to him at the Embassy, to embarrass “friendly governments”, such the US. But the real reason turn out being another “embarrassing”. Which was President Moreno’s own.

And so we arrive to the “INAPapers” affair, which was appartently used by Moreno as a pretext to justify his decision of rendering Julian Assange to the UK authorities (and subsequently to the US). Here is the “INAPapers affair in summary:

Between 2012-2016 the company allegedly had a bank account in the  Balboa Bank de Panamá. WikiLeaks mentioned in a tweet some of the information that has been already published in Ecuador. Also an investigation in Ecuador’s National Assembly was opened. One issue that I could read is that that several furniture items were presumably acquired and stored at Lenin Moreno’s apartment in Geneva, Switzerland, in 2015. The published source that I am using here (Periodismo de Investigación),  also reported that from such account departed transfers to purchase  an apartment in the Mediterranean coast, in 2016.

The transfer pertaining the furniture deal, is alleged to consist in $19 342, and the recipient firm was described as  “Moinat S.A. Atiquities” en Suiza. And regarding the apartment of Moreno in Switzerland, this would have correspond to the residence he has at the time he served as UN Special Envoy on Disability and Accessibility –an appointment he receivedfrom Secretary-General Ban Ki-moon. All according to what has been described by  Periodismo de Investigación.

Already on April 4, WikiLeaks tweeted that “A high level source within the Ecuadorian state has told WikiLeaks that Julian Assange will be expelled within “hours to days” using the INAPapers offshore scandal as a pretext–and that it already has an agreement with the UK for his arrest.”

This was immediately denied by Ecuador’s Foreign minister José Valencia:

In the morning of April 5, 2019,  Ecuador Foreign Minister José Valencia tweeted (he later did withdraw it) in response to the above mentioned post by WikiLeaks:

“Diplomatic asylum is a sovereign privilege of a state, which has the right to grant it or withdraw it unilaterally when deemed necessary”